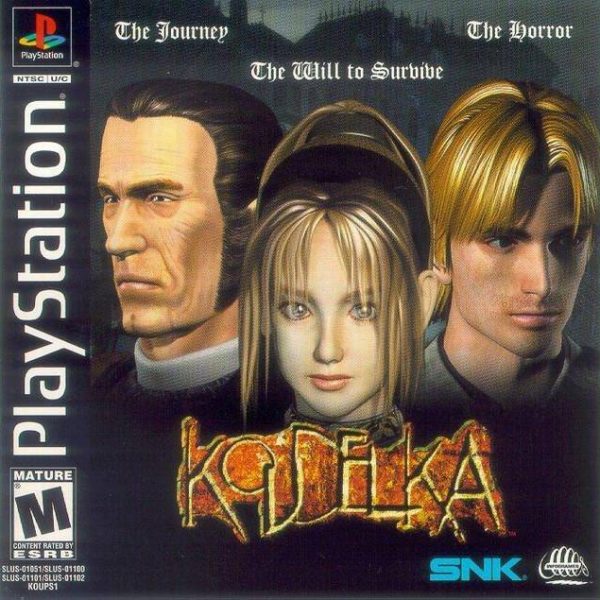 Author’s Note: This review was originally published on September 21st, 2009. Like other reviews of the time, it has “witty” taglines for each section.

I remember back in 2002, I found a game on the shelf called Shadow Hearts. With the amazing setting, fun characters, dark story, and creative features, it turned out to be a wonderful RPG. As the years progressed, more games bearing the Shadow Hearts named got released. While none were as fun as the first, they still retained that Shadow Hearts charm that made the series so popular. However, true fans of the series are privy to the fact that there was a game in the series before the original Shadow Hearts. That game was none other than Koudelka. Unfortunately, many gamers disregarded this title due to it being a different type of RPG. True, Koudelka is different, but if you are a fan of the Shadow Heart series, then you owe it to yourself to play Koudelka; the near perfect combination of survival/horror and RPG.

Tales in Whales.
The year is 1898, and the place is Whales. Koudelka Iassant, a woman with incredible spiritual and magical powers travels through the misty, dreary countryside until she reaches a piece of architecture known as the Nemeton Monastery. Once a grand piece of work, it has now become possessed by bloodthirsty demons, sinister characters, and dark secrets only those with the strongest of mind could ever understand. Mystery, murder, mayhem, and mishaps are about to show themselves and Koudelka may be the only person able to unravel all the Monastery has in store.

A gothic horror RPG set in ancient Europe? You know I’m all about it! By far, the story is the best part of Koudelka. The entire game takes place in the Monastery, which turns out to have more secrets than meets the eye. There is plenty of gruesome history that took place within those walls, and Koudelka will learn about all of it. She is not alone in this adventure, though. At the start of the game, you meet with Edward Plunkett and James O’Flattery. Edward is an adventurer from North America, searching the Monastery for treasures. James is a priest from the Vatican, sent by the pope on a secret mission. All three characters develop well over the course of the game. Shadow Hearts fans will also get to see where certain things began as they uncover the secrets of the Monastery. Unfortunately, when this ten to fifteen hour game ends, you are left with a few questions about not only the characters, but the Monastery as well. It would have been excellent if they tied up all of the loose ends.

Horror Movies.
One of the best things about Koudelka is the presentation. All of the story events play out in fully voiced dialogue with the highly detailed and expressive in-game character models. Other times, the story events play out with amazing, high-quality FMVs. Both feature excellent voice acting. Because of the dark story and setting, the game’s look is quite reminiscent to the Silent Hill games or older horror films.

The Nemeton Monastery is full of some of the best pre-rendered graphics I have ever seen. Decaying walls, piles of bones, blood sprayed on the floor, bottomless pits where bodies get thrown, and torture devices all exist within the dreary walls of the Monastery. Even better is that you can interact with many of the objects, giving the game a sense of exploration. Besides great backgrounds, Koudelka also has some of the most imaginative looking monsters in an RPG.
The musical score is also great. The best part is that there is dead silence when you are exploring the Monastery, giving Koudelka more of that chilling atmosphere found in survival/horror games. In battle, especially the final boss battles, you hear some excellent tracks.

The presentation of Koudelka, like the story, was wonderful. Sometimes, the camera will jumble you up when you enter a new area. Also, certain areas are too dark to navigate unless you stare hard enough. Still, the entire setting of Koudelka, with all of its darkness and grit, is unlike anything in other RPGs. There are no sunny valleys, cold mountains, or lush forests. All you have are the morbid walls of the Monastery. There are no mystical dragons or mythological creatures. You are up against angry demons that act as gruesome as they look.

Strategic Survival.
Koudelka and her team will travel through the haunted Monastery for the entire game. There are no shops to buy items, no inns to rest your weary bones, no villagers that ask for you to complete mindless fetch quests, and not even an ounce of gold to find. Koudelka’s exploration is based around survival/horror games. Instead of going from the world map to a town, to the world map, and then to a dungeon, you have to go through the Monastery, unlocking hidden rooms and revealing new passages.

Luckily, exploration is always exciting. The puzzles to solve are ridiculously easy. Other times, you have to find key items to progress. The best part of the Monastery is entering an area for the first time and taking in the chilling atmosphere of it all. Koudelka’s controls can be a bit clunky at times, however. Walking up and down stairs or climbing ledges requires you to be in just the right position and may take some adjustment. One of the issues many people have involves saving your data. Certain rooms allow you to create a temporary save file. Actual save spots, which restore all of your characters completely, can only be activated after you defeat the boss of the area. The gripes about saving were absolutely ridiculous. There were plenty of opportunities to save. The only difference was whether or not you recovered your health and magic completely. As I walked through the haunted areas, it felt like I was playing a survival/horror game instead of an RPG. Of course that feeling went away when I entered a random battle.

Battles are turn-based and take place on a giant grid. During your character’s turn, they can move, and then perform an action. In order for your character to attack, they need to be in range. Some weapons, like pistols and rifles, have unlimited range. Spears allow the character to be two square away from the enemy. The rest of the weapons such as swords, axes, knives, and maces, require the character to be one square away from the enemy. Magic can be used by all of the characters and the closer the caster is to the enemy, the more damaging the magic attack. Also, magic takes time to charge so it is important to plan a spell accordingly. With continuous use with a type of weapon or a certain spell, their level and effectiveness will go up. Ultimately, you want to have each character focus on only a few areas instead of having everyone become a jack-of-all-trades.

Enemies perform the same way: they move towards your team, attack, cast magic, etc. Obviously, battles take a bit longer to finish than most RPGs. Luckily, the random encounter rate has the perfect rate. Also, the rewards are far better than they are in other RPGs. Most of the time, you will get new items, weapons, and accessories. This easily makes up for the lack of shops. Certain weapons do break, and the long distance weapons require ammo, however I never ran out of supplies. In fact, I found myself getting rid of certain things to make room for more. Another reward from the battles is the experience system. Characters recover completely after they level up. You then get four bonus points to build up their stats. Again, it is important to give each character a designated role instead of spacing the stat building evenly.

I can see why certain people frown upon Koudelka’s features. Battles are slow, and having weapons that will break is never a fun feature. Also, magic is far more effective than weapons most of the time. Yet, I enjoyed all that Koudelka had to offer. I never had to level grind, and the bosses were just challenging enough for me to not worry about getting a game over. Besides, the survival/horror atmosphere that I love made going to new areas both scary and exciting.

One, Two, Three, Four.
While Koudelka does span across four discs, the game is only ten to fifteen hours. My file took me twelve, and that was with some backtracking, item hunting and getting lost. Finishing the game and seeing one of the multiple endings does not unlock a bonus gallery or extras. In fact, the point of going back a second time would to obtain certain secrets you may have missed the first time. Despite some of the game’s problems, Koudelka was an absolute delight to play. Sure, it got frustrating when the exploration was cut short with snail-paced random battle, but patience proves to be a virtue. Those looking to see the events that happened before Shadow Hearts, and those looking for an RPG with macabre story-telling and settings should definitely check out Koudelka. This is an RPG that dared to be different and try new things. For the most part, the combination of survival/horror and RPG worked out for the best.