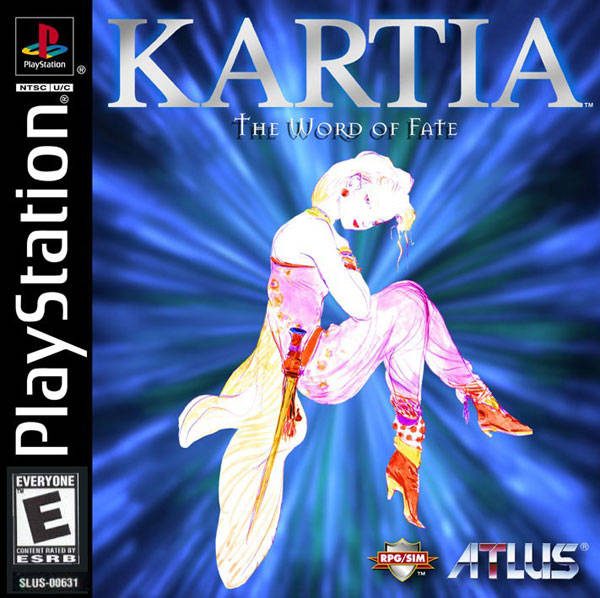 Author’s Note: This review was originally published on September 2nd, 2003. My overall opinion of Kartia has actually improved since then. Hopefully, my writing has improved, too. This review is filled with cringe.

Kartia is a game that will forever be unknown to a majority of people. Sure, it’s nothing spectacular, but it’s still an interesting and fun game worth trying.

Story: 9/10
At the beginning of the game, you choose to play as either Toxa or Lacryma. Toxa is a young knight who fights for justice and Lacryma is a woman warrior whose father was a brave hero. Both have different characters, both intertwine, and both have good twists and turns. They also revolve around the world that uses Kartia, special cards that act as magic spells. What I complain about is that they’re a bit too linear, but that’s how it usually is in most strategy RPGs. You don’t have any side jobs or nothing to do like in Tactics Ogre or Final Fantasy Tactics.

Gameplay: 5/10
The way the story flows are in chapters. Each character has 20. The set up goes dialogue-battle-dialogue. Rinse, lather, repeat. It’s really basic, something I wasn’t too fond of. I wished that you were able to move around the map (which there is none of) and train or something. Unfortunately, you just go with the flow of the game. That is something that should’ve been fixed. Alas, oh well.

Battles: 8/10
Battles are both good and bad. I’ll start with the bad. First off, if one of you’re main characters (as in a human) dies, it’s a game over. There are no revive spells, they just disappear and the game ends. Also, EVERYONE (friends, foes, bosses) has 100 HP. That’s it. So there is no variety. Another thing is that the highest level you could reach is 20. I mean, it will take you a while to get that high, but 20 is a low number. Humans are the only characters that can create the monsters in this game. That seems realistic, but you might want a human to attack (because they’re generally more powerful) as opposed to summoning something. Now for the good stuff. First, off you can find Kartia (which create pretty much everything in the game) and use it to create tons of new weapons, armor, and spells. There are tons of each of the mentioned. Also, each element (fire, water, earth, and wind) all have different types of ranges. Some are mainly used for wide range, others for individual attacks or healing. Also, there are types of Kartia: Silk, Mythril, and World Tree. Silk is most common, then Mythril, and last is World Tree. The rarer the material, the more powerful the selection. Also, you can create monsters. There are many types, and each one is a certain class: Normal, Doll, and Shadow. They affect each other like the would in a game of rock, paper, scissors. They can each equip weapons and help you out. You can burn down the grass, freeze the water, and do other things to affect the battle field. You can have at most 20 allies on the field for huge, all out wars. In the end, the battles are a lot fun. There are some major things that make the battles a little bad, but still they’re fun in the end.

Characters: 9/10
I really liked the characters, especially when I saw them interact with each other in the two stories. They develope quite well over the course of the game. I didn’t like how some just seemed to disappear, or appear out of nowhere. Still, great characters overall.

Graphics: 8/10
The graphics are what you’d expect for a strategy game: 2D playing sprites on a 3D playing field. The character art work is quite impressive, drawn by the FF person. I don’t know his name, but you’ll recognize his style. Character sprites are cool and detailed, but they lack much movement. The spells look very pretty. They appear as water colors with flashy affects. Nothing really that will make you gouge your eyes out, but no great eye candy either.

Music and Sound: 10/10
The music is definitely my favorite part of the game. The music is full of orchestrated tracks. The battle themes are especially nice because of their war sounding tone. The music is fitting for each mood. Very nicely done.

The sounds are a little cheesy, especially the sound when a character is surprised. There aren’t really even that many sounds in the game. The sound doesn’t matter, thanks to great music.

Replay Value: 9/10
There are two stories to complete, both the same length and both are different. You’ll be playing this again some time after you finish the first story. After that, you may try it again to get stuff you missed.

Difficulty: Hard
This game can be quite challenging, especially the last bosses. You’ll have to use plenty of strategy to overcome your foes.

Buy or Rent: Buy
I haven’t seen this game out in video rentals stores, so your chances of renting it are slim to none. If you do happen to see it at a game store, then give it a buy. It’s only 15 or so dollars, and for that price it is worth it.

In conclusion, Kartia is a nice game. While many have never heard of it, it’s still something worth checking out. If you like strategy RPGs, but don’t care about linear game play, then go ahead and give this game a go.