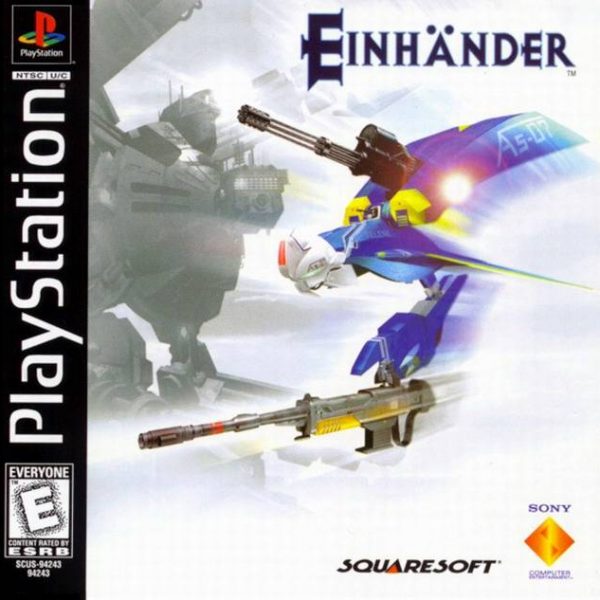 After playing Final Fantasy VII, Final Fantasy Tactics, and SaGa Frontier, I held the firm opinion that Squaresoft could do no wrong. The era in which those games arrived was an era that saw me looking everywhere for a Squaresoft logo. I wanted to consume anything that had their handiwork. There was one game that I kept overlooking. That game was Einhander, a side-scrolling shoot ‘em up. One reason was because of the genre: I’m terrible at shoot ‘em ups, shmups, shooters, etc. Another reason was because of price. Einhander’s cost never seemed to go down. Still, a greater part of me wondered if Squaresoft could deliver that same level of game quality to a non-RPG. Recently, I found the answer. It’s a resounding “yes”.

Einhander has a story that has more depth than you would think. If you find a copy of the game, be sure to take the time to read the instruction manual; there’s some fascinating exposition that most shmups don’t have. But, for the sake of this review, I’ll cut to the chase. During the second war between the Earth and the Moon, a fighter pilot from the Moon’s army that committed treason has been sent on a suicide mission to destroy supplies on the Earth. This pilot mans a bizarrely shaped craft dubbed Einhander. It got its name from the Manipulator Arm, an apparatus that can grab, use, and maneuver special weapons from enemies. 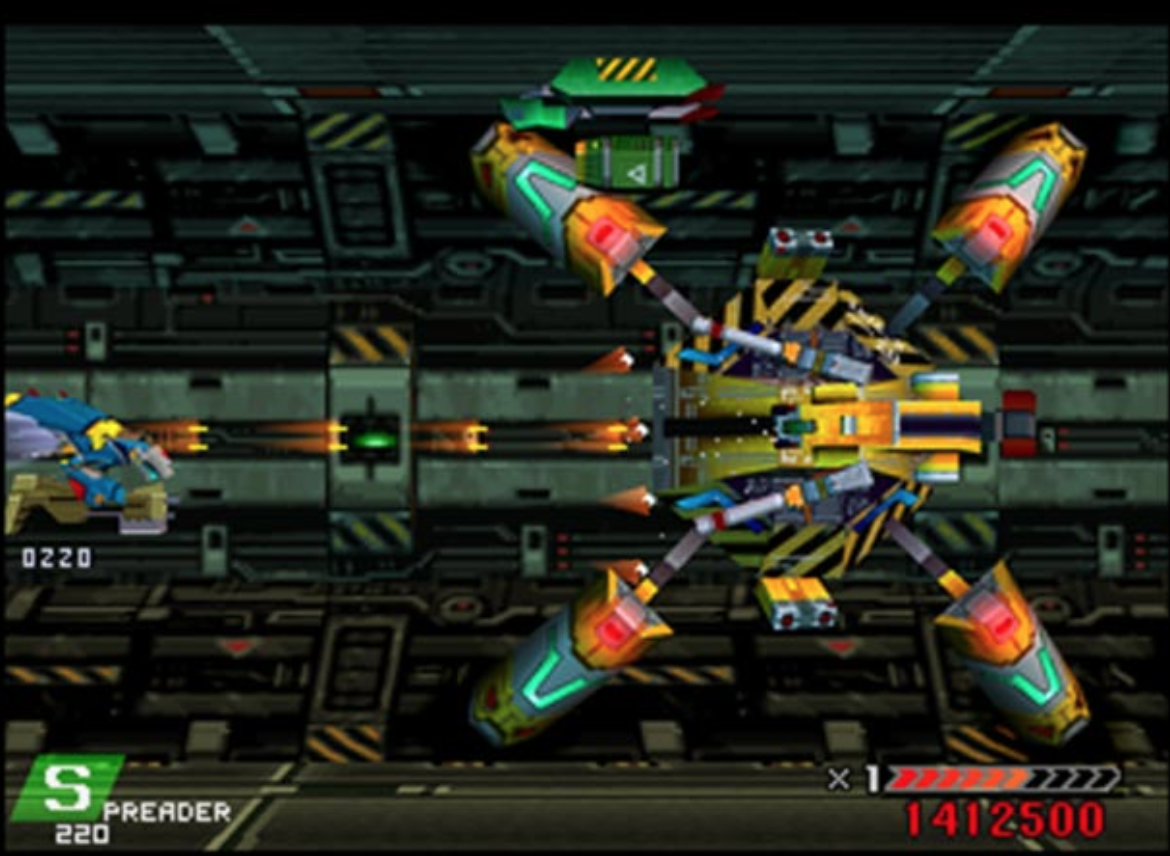 This sub-boss is a real brute.

Indeed, the Manipulator Arm plays an important role in your journey through Einhander. Before beginning, however, you can choose one of three Einhander crafts and a difficulty setting. After that, it’s time to begin. Einhander is a 2D, side-scrolling shmup in every sense. One button is used for your regular ammunition: a machine game with miniscule power but infinite bullets. You can increase and decrease your speed with the shoulder buttons, which adds an interesting level of strategy. As you destroy enemies, they may leave behind Gun Pods. Picking up Gun Pods is where Einhander’s shooting gameplay truly shines. Gun Pods come in different varieties. There is the Flash, which creates a short ranged beam of electricity that demolishes enemies on impact. There is the Blade, which creates a melee lightsaber. My favorite is the Grenade, due to its distance and raw power. With the Manipulator Arm, you can move your Gun Pod up and down. Sometimes, the angel of attack will change. Other times, the bullets will perform differently. For instance, the Wasp will fire missiles on a forward trajectory when the arm is one position. If you switch positions, the Wasp will fire homing missiles. All of this variety, plus some unique opportunities for bonus points, gigantic bosses, and non-stop action make Einhander a blast to play.

And, I say this as someone who is terrible at the game. Nay, terrible at the genre. Absolutely terrible. I have seen the game over screen more times than I care to admit. While I haven’t played the game on Easy yet, I can tell you that it’ll take me months of practice to “git gud” to get through the game. I don’t even care about score multipliers and finding new Gun Pods – I just want to finish it. But, despite my lack of skill, I immensely enjoy my time with Einhander.

After grabbing a Gun Pod for the first time, you can start a new game with it equipped on your craft.

As a shmup, Einhander will have your eyes dancing and darting across the screen to keep up with the action and not meet a quick end. The world of Einhander is depressing and bleak. Yet, it still manages to be absolutely stunning, if not overbearing at times. Something neat about Einhander is that the perspective will shift from 2D to 2.5D during certain parts of the various stages. While you can’t move off the 2D axis, the shift in vantage point offers exciting new views and makes each stage feel even more different from one another. Due to all of the sights, it can be hard to keep up with all of the action. As fun as it would be to stop and stare at the backgrounds, you need to remain focused on not getting your ship blown up. My favorite thing about Eihander is the soundtrack by Kenichiro Fukui. This music is excellent. The electronica and techno vibes fit perfectly with the dystopic setting. There’s a beautifully simplistic nature to each song that does the job of keeping you motivated as you blast through enemies. Sure, the explosions and the various sound effects from the bosses are neat, but it’s the music that really steals the stage.

From what I can tell, Einhander isn’t a long game to get through once; its high price tag doesn’t help with that fact, either. However, shooters are meant to be played more than once. There are multiple modes of difficulty and multiple ways to get that score as high as possible. Some levels have multiple routes. So, just because you finish the game once doesn’t mean you shouldn’t go through it again and again. Einhander will be one of those games that I will pop in from time to time just to see how far I can get. Eventually, I’m sure I’ll be able to finish it. It just won’t happen any time soon. Until it does, however, I’ll continue to be having fun with it.

Overall, 9/10 – Einhander reminds me of a time when Squaresoft cared about their products. This 2.5D shooter is a sight to behold and play.