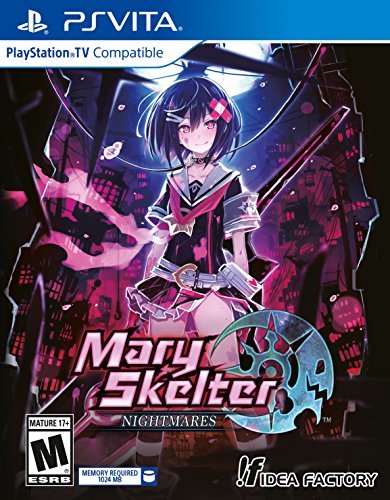 Mary Skelter takes place in a twisted version of our world. Years ago, a living organism called the Jail grew roots in the planet and caused civilization to get buried underground. Bizarre beings called Marchens now run the show: they capture humans for torture or force them to lick the walls of the Jail’s various structures. Two prisoners in the Jail, Jack and Alice, must endure this humiliation. Fortunately, they are able to escape thanks to the help of a girl calling herself Red Riding Hood. Wielding a massive pair of scissors, Red Riding Hood breaks Jack, Alice and the rest of the prisoners free. Now, Jack and Alice join the members of the Dawn. These freedom fighters oppose the Marchens and explore ways to escape the Jail. 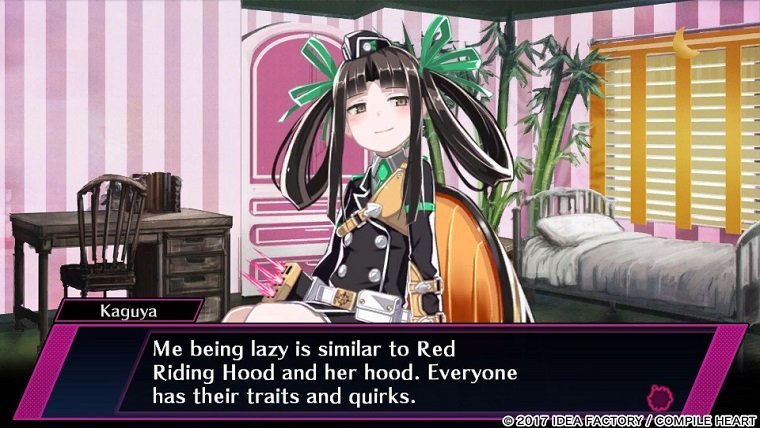 Kaguya is another fairytale inspired character that will join your team.

So many questions from the start of the game, and it’s interesting that these questions are in a sub-genre that usually strays from deeper narratives. How did Red Riding Hood know where to find Jack and Alice? Who are these two exactly? What is the Jail? What are the Marchens? Throughout the course of the game, all these questions and more will be answered. It makes for an intriguing tale that will keep you guessing through its nine chapters.

While the dialogue is bountiful, most of your time in Mary Skelter: Nightmares will be spent readying your team for battle and navigating labyrinthine dungeons. There is plenty to do at the Dawn. You can purchase items, upgrade equipment, give your teammates gifts to raise their affection, and change jobs. All of the characters in Mary Skelter: Nightmares have access to five jobs. While the job system isn’t as deep as something like Dungeon Travelers 2, there is still a lot of variety and room to play around in order to make a team that’s suited to your needs. Sadly, the job system takes a while to truly shine due to some of job trees lacking anything worth using. To be more specific, Red Riding Hood aka the character you meet from the start aka the character you’re stuck with for a while struggles to pull her weight. It’ll be a few chapters before you can enjoy the fruits of building a perfect team.

You earn Job Rights every ten levels. Use them to take advantage of the plethora of options available.

You’ll know that your team is perfect for your needs when you see them work well together in combat as you utilize all of the features offered. Battles are from a first-person perspective. Both sides take turns exchanging blows until victory or defeat. That’s the basics, but there is more to it and it all gets introduced quickly. Alice, Red Riding Hood and the rest of the girls that join your party are called Blood Maidens. By overkilling enemies or taking advantage of their elemental weakness, they will get blood splattered on them. Once enough blood is acquired, they will enter Massacre Mode which let’s them use unique abilities, recover energy via extra blood splatter, and enjoy increased stats. If you don’t want them to enter Massacre Mode, your teammates can lick one another for healing or stat boosts. However, if they take too much damage, then there’s a chance they won’t enter Massacre Mode. Instead, they will activate Blood Skelter. In this form, Blood Maidens experience a surge in power. However, they can’t differentiate between friend and foe. To prevent this, Jack can use his special Mary Gun to purge their corruption. Jack can also use items or act as a human shield. All of this will be critical during the start of the game. With a small party and minimal resources, battles will require strategy. Around the mid point, random battles will become trivial if you know how to build your party. This is when battles feel the most satisfying.

Navigating some dungeons gets tedious. While you can discover tons of treasure and various points that grant you random bonuses, later game dungeons overstay their welcome due to a high random encounter rate, massive size, and another unique feature: Nightmares. If you think of a game like Haunting Ground or Clock Tower 3, then you will get an idea of a Nightmare. These creatures will stalk the team until they get far enough away. If you can’t get away, you’ll have to fight them in order to stun them. Nightmares can eventually be killed, but up until that point you have to be wary of them showing up.

Near the end of the game was where the stuff mentioned above started to ware me down. Instead of panicking when a Nightmare Hunt began, I just got annoyed. In battle, a quick blast from Thumbelina’s Mortal Force was enough to nuke the enemies in one hit. Even bosses started to get boring. If Mary Skelter: Nightmares had less amounts of everything, then it wouldn’t have felt like such a chore to finish. 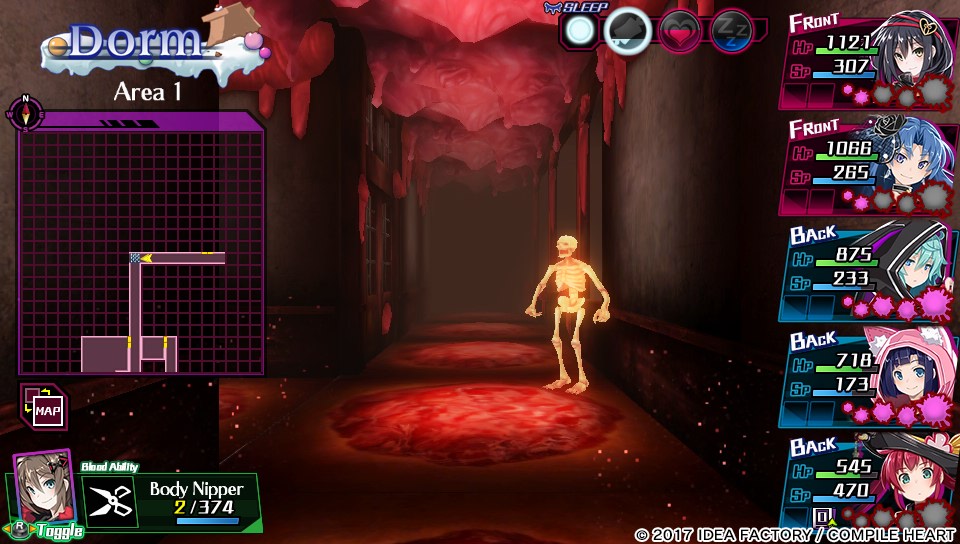 The brighter the Blood Splatter, the less likely the Blood Maiden will enter Blood Skelter.

Don’t misunderstand: the game is still fun throughout the 40 hours it takes to finish. It can just get repetitive. In fact my biggest problem with the game is with its presentation. The music mostly forgettable, there are far too many monster palette swaps, and dialogue sequences utilize that breathing-talking head style that IF/CH is known for. Some highlights include watching enemies explode in a cyclone of blood, seeing new dungeons, and enjoying the various costumes that come with job changes. Finally, the voice acting (either Japanese or English) is excellent.

With a difficulty level that can be changed at any time, a post-game dungeon, a secret character, and multiple endings, Mary Skelter: Nightmares has plenty of lasting appeal. Even the road to platinum is straightforward. If some of the dungeons weren’t so arduous, this would be a game worth replaying again just to fiddle around with the various jobs. At a glance, Mary Skelter: Nightmares looks like another dungeon crawler. Stick with it, and you’ll experience unique features that make most of the dungeon trekking enjoyable. Top it off with an interesting narrative, and you have yet another recommended dungeon crawler for your PlayStation Vita.

Overall, 8/10 – Despite some messiness, Mary Skelter: Nightmares takes the traditional dungeon crawling formula and mixes it with some fresh ideas to make it stand out from the others in the sub-genre.