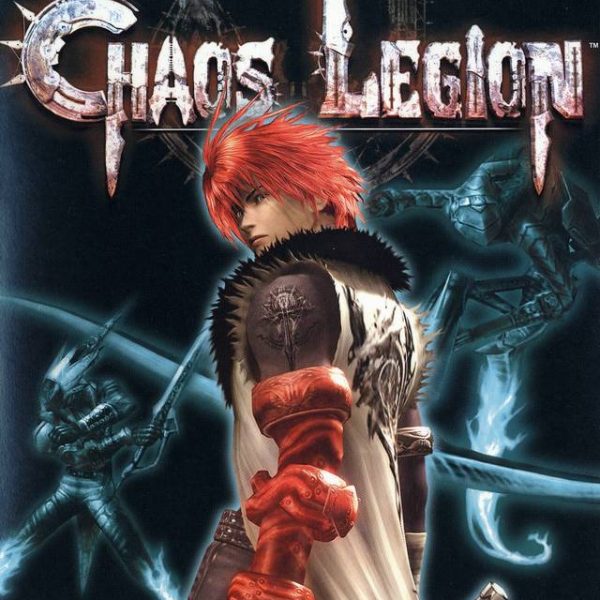 Author’s Note: This review was originally published on August 11th, 2003. And boy-oh-boy, does it show. Haranguing Devil May Cry, attempting to be funny, and using punctuation signs to look like the PlayStation buttons? Yep. It’s all here. I still have a high opinion of this game due to the memory of hanging with a close friend on the day I picked it up, but this review is pretty terrible.

I think the reason why Devil May Cry and Devil May Cry 2 sucked so bad was because the fine folks at Capcom were spending their sweet time on Chaos Legion. Personally, I think the time was well spent!

Story: 9/10
Sieg Warheit is a young warrior for Knights of the Dark Glyphs. Chosen by the council, he has been sent to hunt down his former best friend but now arch-enemy Victor Delacroix. Their friendship shattered after the loss of their friend Siela. Delacroix stole the forbidden book called Apocrypha, and it is up to Sieg to discover why and destroy his rival. The story has some depth to it, and will make you yearning to discover what happens next. I didn’t like how confusing it appeared during the beginning. It does become easier to understand when you put everything together.

Gameplay: 10/10
Very fun, but it can be confusing at first. Still, you’ll get used to it. Players are given an in-game tutorial. Whenever something new happens (new items, new action, new power-up) it gets explained to you. Sieg has a sword for his weapon, and can do various attacks with it. But by equipping Legions, you can do more skills (Double Jump, Counter Attack, Tackle,…the list goes on). There are seven Legions (with fun names like Hatred and Malice) and one ultimate Legion called Thanatos. You must find the pieces of Thanatos to make this Legion yours. You can have two Legions equipped at a time, making the game play very customizable. Not only do Legions allow you to do new attacks, but you can summon them to fight along side you. The only downfall is that your strength, speed, and guard decrease. So summoning is only fitting at certain times. Besides the Legion summoning and customization, there are plenty of monsters to hack and slash. Unlike DMC, this time the monsters can really leave their mark. Not only that, but they attack in swarms of 20-30 at times. It really takes some quick reflexes to deal with monsters without harm. The bosses are VERY challenging, and will require you to think and plan carefully, unlike in DMC when you could just hold down the [] button to shoot a million bullets. Expect to die many times before realizing how to best a boss. Overall, the game play is excellent.

Characters: 9/10
Sieg and Delacroix are two awesome characters. You’ll also meet up with a few other people in the game. The characters are very cool and well rounded. They all have motives, and don’t appear just to take up space. I just with there were a few more.

Graphics: 10/10
Gorgeous. The gothic theme is perfectly well done, with beautiful architecture and landscapes. The detail put into the buildings and scenery is quite great. The character models are great too. Sieg looks SO FRICKIN’ COOL, especially during the many cinemas. He handles his sword with grace and ease. There is no slow down in the game, even when surrounded by countless monsters. Speaking of which, the enemies are very cool and diverse. The bosses are also unique and cool. The Legions also have their own unique look and animation.

Music and Sound: 10/10
The music is a mix of heavy metal rock and orchestrated symphonies. Opera vocals are heard at times too, giving it a very dramatic feel. The music is great. The soundtrack will definitely have you cranking up your volume.

The sounds are nice as well. The voices match the characters perfectly, and every cut and slash sounds good.

Replay Value: 9/10
You will totally come back for more after completing the game once. There are two difficulty levels, unlockable characters and extras, items, and you can customize your favorite Legions any way you like. And if you miss a piece of Thanatos, then you can go back for it. You’ll be playing this game again and again.

Difficulty: Hard
This is a challenging game. At times, you’ll be overwhelmed with enemies and not know what to do. The bosses will give you a run for your money due to their challenge. But the difficulty level will have you coming back for more, because it is not impossible unlike other games.

Buy or Rent: Rent
If you’re like me, then one rental is not enough for me. I bought my copy. But in general, I’d say rent this game because some may be able to complete it in one rental.

While the game can get tedious, overall it is an excellent game to play and own. Where DMC failed CL made up for it…and then some! With tons of hack n’ slash action, RPG elements, and a kick ass protagonist Chaos Legion is one game you aren’t going to want to miss.