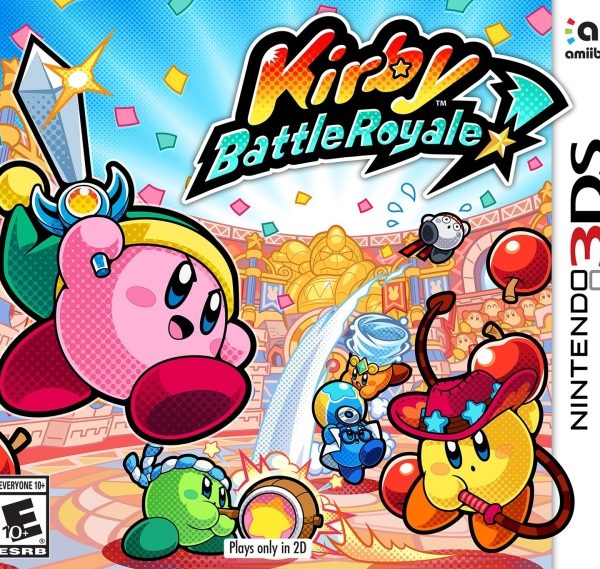 Kirby Battle Royale can be considered a spin-off Kirby title. However, unlike some of the more gimmicky (and fun) ones such as Pinball or Dream Course, Battle Royale still has Kirby running through areas and fighting enemies. Normally, the puffy pink protagonist runs through 2D stages where he can take care of any opposition via inhalation and swallowing. Certain enemies let him acquire their powers aka activate his Copy Ability. In Battle Royale, Kirby will run through either a 2D or 3D arena that is set as a mini-game. Before the mini-game begins, you will select a Copy Ability and be stuck with it for the duration of the mini-game. Some boosting items can be selected if you like to make Kirby more powerful for a set amount of time. Usually you won’t need them since the enemy AI is so moronic.

Indeed, Kirby Battle Royale is nothing but a collection of mini-games. Even if you play Story Mode, which has Kirby and his Waddle-Dee friend competing to earn the tastiest cake in Pop Star, you will be only playing mini-games. None of these mini-games are fun. Does gathering apples, throwing them on a trap door, and pulling a lever to activate said trap door sound fun? Of course not. Does playing an odd version of basketball with a teammate that is controlled by an unhelpful AI sound fun? Of course not. Does running around a circular stage while trying to gather chips before a timer runs out sound fun? Of course not. The most basic mini-game, Battle Arena, has Kirby fighting clones until only one remains standing. Battle Arena is the only slightly fun mini-game available, but even that will grow dull after a few rounds. When a mini-game ends, you are forced to watch the same old victory song and dance over and over.

Kirby Battle Royale looks passable. Most of the arenas are zoomed out; it’s hard to appreciate all of the goings-on due to things looking so tiny. There are times when the graphics look as they should and feature Kirby and all of his adorableness. The music is forgettable. With the exception of some remixed tunes from earlier Kirby games, none of the original music is worth a listen outside of Battle Royale.

The story campaign can be finished in about three to four hours. The more “stuff” you finish in Kirby Battle Royale, the more rewards and coins you earn. Coins can be used to unlock new characters or accessories for the game’s online mode. Personally, I have no plans of playing this game online. Or ever again. This is not a good game. Even if the mini-games had some fun to them, I wouldn’t recommend the game to anyone. Kirby’s spin-off titles were never award winning must-haves. But, none of them have ever been as disgraceful as this.