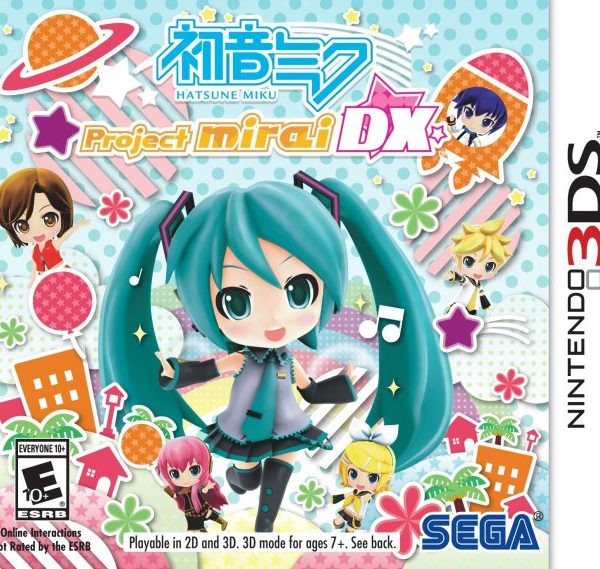 Like a bit sized candy or a miniature bull dog, everyone’s favorite Vocaloid Hatsune Miku has become tiny for her latest video game. Hatsune Miku Project Mirai DX on the Nintendo 3DS is another rhythm game that has new and old songs, as well as various activities you can do when you get tired of timing your stylus and/or button presses. Unfortunately, of all the Miku games I have played thus far, this one is probably the most disappointing. I still recommend it to Vocaloid enthusiasts and to those that enjoy a good rhythm game, but don’t go into the game expecting the magic from the Project Divas.

From the start, it’s clear that Project Mirai took a different approach than Project Diva. The biggest difference is the look: instead of full-sized characters, everyone has been turned into a mini-version themselves. This includes Gumi, a Vocaloid that hasn’t received the same level of exposure as Miku, Ren, Lin, Kaito, Luka and Meiko. Let me tell you, the graphics are adorable. While I prefer the stylish look of the full-sized figures and the more complex choreography of Project Diva, Project Mirai is proof that big things come in small packages. The Vocaloids might be lacking in size, but they make up for it in personality. The game has a great look with the cuteness factor overloading at every point. Whether you’re watching one of the many music videos or chilling with a Vocaloid in their room, the game has a great look despite being different. Of course, there are some issues. My biggest problem is that all of the menus are far too messy. Unless you use your stylus, you’ll have trouble navigating all of the options. Also, the 3DS lacks the polish of the Vita and it makes the overall appearance look jagged.

This leads me to another issue, the sound. I’m not the type of gamer to compare consoles and their specs, mainly because I don’t know the first thing about them. Also, I never cared about the sort of thing in the first place. However, comparing the sound quality of the Vita to that of the 3DS is like night and day. Project Diva on the Vita sounds crisp and clear. Project Mirai on the 3DS sounds muffled unless you plug in headphones or turn the sound up as high as possible. This is a game all about music and rhythm, so having to work around the sound issues gets terribly frustrating. It doesn’t make the game unplayable, but it is something to take into account.

Aesthetics aside, Project Mirai is a fun game that will be easy to pick up and play no matter your skill level with rhythm and music games. With 47 songs in the game, chances are there will be a tune for everyone to enjoy. Playing the game is simple: you select a song, and then select whether you want to play it with the buttons or with the stylus. From there, you can select a difficulty level. Finally, the stage will begin. Stylus Mode requires you to tap the notes that match the appropriate colors on the touch screen to the beat of the song. The higher the difficulty, the more colors you need to match. Some notes require you to hold the stylus, indicated by a thick line. If the line has a rainbow within it, spinning the stylus will increase your overall score and the amount of Music Points you earn. Music Points are needed to buy items for the rooms and new outfits for each character. Button Mode is similar, with the obvious difference being you need to match the buttons. With higher difficulty comes more tricky presses and holds. The A, B, X and Y buttons are the ones that will get the most use. However, on harder songs you will have to take the control pad into account. If a hold-note has a rainbow, you need to rotate the circle pad to earn more points. Project Mirai has a challenge level for everyone, whether you’re an expert or a novice. Most songs have three levels of difficulty (Easy, Medium, and Hard) for both Stylus and Button Modes. A few songs have a Super Hard level of difficulty. After finishing a song for the first time, you will unlock a new one. Furthermore, the more you complete, the more stuff available for purchase at the shop.

And now the moment you’ve all been waiting for, my critique on the song list. Unfortunately, the selection is lacking in good music this time. Some of my favorite songs have made the cut, and seeing them performed by miniaturized characters is a treat. Examples include Melancholic, Romeo and Cinderella, and World Is Mine. I have found some new favorites, too. These include Hello/How Are You, 1 2 Fan Club, Doremifa Rondo, On the Rocks and Finder. The majority of the tracks fall under the, “I like them but I doubt I’ll be playing them as much as the others” category. The rest of them fall under the, “Please turn off the damn sound on the damn 3DS” category. In other words, despite a few go-to songs that I will never grow tired of playing, the majority of the songs range from mediocre to upsetting. Nothing is as bad as Rin Chan Now or Sadistic Music Factory, but there are a few stinkers in there such as Ageae Again and 1925 that could have been left out or replaced with something more fun. One of my biggest complaints about the music is that the lyrics that get displayed during the videos are in romaji. As a person that loves studying Japanese, seeing the use of romaji has always ticked me off. I don’t see why they neglected to add the option to switch to either Japanese script or fully translate the songs into English.

It doesn’t take long to unlock all of the music in Project Mirai. Some of the songs allow you to switch Vocaloids, giving the song a new perspective. When playing the rhythm game starts getting tedious and you don’t feel like spending your Music Points, you can do other activities. For instance, you can play Puyo Puyo or Reversi with the current Vocaloid you’re visiting. Or, you can make your own music, edit videos or use the AR cards to show some fun images. The core game might be short, but you’ll never run out of other things to do. By the time you unlock everything, you’ll be looking at 50 hours of game time. Personally, even after all of the content has been seen, I know I’ll be popping the game in from time to time to simply replay favorite songs. There just won’t be as many replays as the Project Divas. Hatsune Miku Project Mirai DX is a rhythm game that all fans of the genre and/or Vocaloids will eat up. The adorable, chibi look and the variety of activities available are impressive. Unfortunately, something just feels slightly off-pitch.

Overall, 6.5/10: An above average game worth playing, but don’t let the cute facade fool you; you won’t be experiencing the same level of fun as Project Diva f.