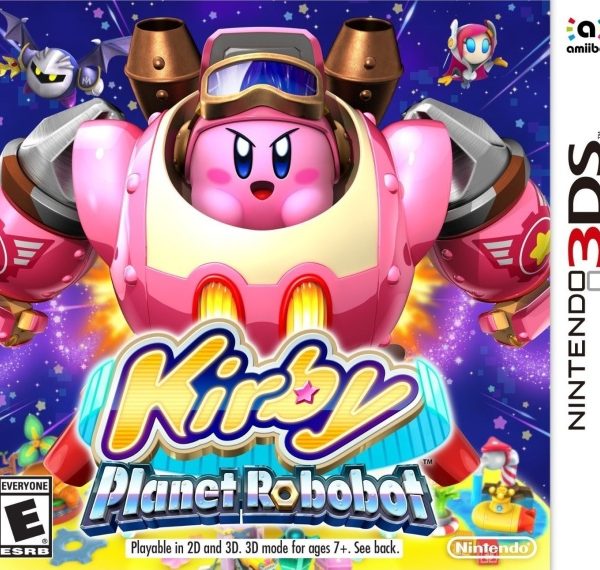 My favorite Nintendo character’s debut on the 3DS was a dream of a game. Kirby Triple Deluxe was a fun game for a variety of reasons, and Kirby’s adorable face and body in full 3D was the icing on the cake. Expectations were high for Kirby: Planet Robobot, the next game in the Kirby series and his next adventure on Nintendo’s current portable system. Based on the score using those annoying hearts, it should go without saying that my expectations were met and, ultimately, surpassed. Fans of Kirby will gobble up this title, but those looking for good and old-fashioned fun platforming will also have a grand ole time.

Kirby: Planet Robobot (i.e. Robo Kirby) begins as most games in the series do: Kirby is napping under a tree when a mysterious entity enters Pop Star. This time, the being starts replacing all of the world’s greenery with mechanized structures and steel beings. When a bolt falls on Kirby’s head, he wakes up to another adventure. There’s something fishy going on and only Kirby can stop it. It’s a classic story for the pink puff, but there is more to it than you might expect. The villains in Robo Kirby have more depth to them than meets the eye. Sure, returning characters like Dedede and Meta Knight have a place in the story, but these new villains are extra devious. It’s a surprising change for the Kirby world, but it’s still lighthearted.

Despite the mechanized world, Robo Kirby will play familiar to anyone that has touched the series. Kirby’s adorably squishy self is capable of running, swimming, sliding, floating, and so on. His most important technique, the tried and true Copy Ability, once again takes the center stage. Returning skills include Beam, Sword, Jet and Ninja. Robo Kirby has a variety of new abilities that are a blast to use. The Doctor ability lets Kirby create and store potions, throw pills like Dr. Mario, whack enemies with a clipboard and fire liquid from a syringe. The Poison ability lets Kirby ride a wave of toxins, set poison on the ground to deal continuous damage, spray a mist and much more. The ESP ability pays homage to Earthbound; letting Kirby create and utilize a variety of psychic attacks. The new abilities are awesome and each one is used to solve puzzles or proceed through hidden sections of a stage. Speaking of which, each stage has Force Cubes that can be collected to unlock the path to the boss and unlock new stages. There are also a variety of stickers you can collect in every stage.

The most prominent feature in Robo Kirby is a giant robot that Kirby gets to ride during various levels. This commanding contraption allows Kirby to pick up heavy objects for puzzles, punch the lights out of enemies, destroy obstacles that would normally be invincible to Kirby, and other fun features. Just like Kirby, the robot he rides is able to copy the abilities of enemies for over the top results. Copying a sword enemy gives the robot the ability to wield massive blades. Copying a bomb enemy allows Kirby to send out explosive minions that detonate on impact. As if all of the new abilities Kirby could get weren’t fun enough, seeing them in action while riding his robot adds to the enjoyment. The aforementioned stickers can be added to the robot to give it your personal touch.

Robo Kirby looks just Triple Deluxe, new enemies, bosses and abilities aside. It’s a great looking game that benefits from the 3D feature on the 3DS. There will be multiple instances in which Kirby will jump from the foreground to the background; having the 3D turned on makes the look more captivating. The music, in typical Kirby form, is catchy and poppy. With a variety of hilarious sound and voice clips for some of the characters, Robo Kirby sounds as precious as it looks.

Like all Kirby games, Robo Kirby can be finished in only a few hours. The good news is that there are tons of extras to check out and unlock. Finishing the game lets you access the classic Arena and take control of Meta Knight in his own adventure. There are some bonus games you can play that can further add to the game time. Those that wish to do it all can attempt to collect all of the stickers, too. No matter how much you accomplish, there is no denying that Kirby: Planet Robobot is a wonderful title that I recommend to any fan of Kirby, as well as anyone looking to play a cute adventure title.

Overall, 8/10: While a bit short, Kirby: Planet Robobot is another wonderful entry in this classic series that has lots of heart and fun.