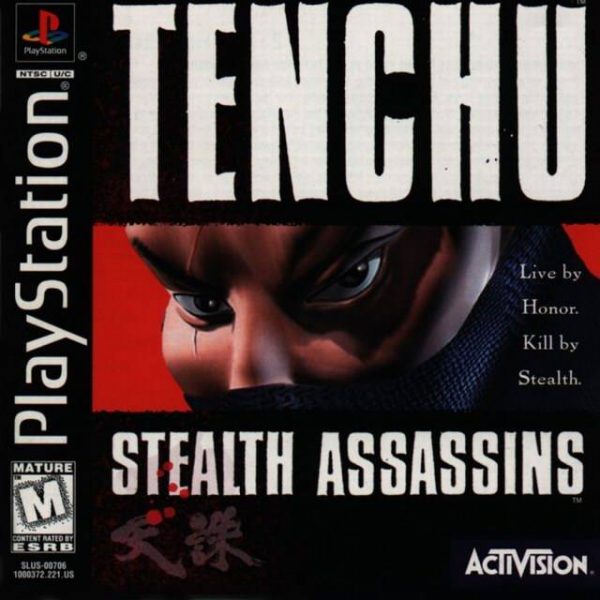 Between my half-day long (nah, I’m exaggerating) slogs in RPGs, I always feel that it’s important to mix things up with different genres. Despite having dabbled in Tenchu: Stealth Assassins back when it was still fresh in 1998, I never had the chance to fully sit down and check out all it had to offer. Thus, I decided that it was time to take a break from RPG-ing and fully examine the origins of one of my favorite franchises of all time. Tenchu: Stealth Assassins still holds up in some regards, but time has not been completely unkind to this ninja novel.

The story of Tenchu takes place in feudal Japan, which happens to be one of my favorite eras in world history. Rikimaru and Ayame are two ninja of the Azuma Clan who serve under Lord Gohda. Gohda sends them on a mission to gather intelligence on some enemy ninja. It turns out that an evil sorcerer, Mei-Oh, has been up to no good. Mei-Oh has put his loyal warrior, Onikage, up to the task of wrecking some crap all up on the province where Gohda lives. This will not do, so Rikimaru and Ayame are on the scene. Meeting these and more characters for the first time is a treat, but the dialogue is a bit stale during most story events. Luckily, tired conversation doesn’t stop Rikimaru or Ayame from being total HNICs. I coined that term now as I began writing. You can thank me later and, while you’re at it, stop saying YOLO. It’s not cute.

The key to victory in Tenchu is stealth. Remain unseen, and you officially become a true ninja. For starters, items are available such as shurikens, medicines, bombs and many others. Also, no ninja worth his/her salt leaves for a mission without a trusty grappling hook; perfect for zipping across rooftops. Missions in Tenchu usually involve you creeping about town and avoiding enemy detection. The controls are, for the most part, solid. Unfortunately, and this is a big unfortunately, Tenchu: Stealth Assassins uses tank like controls. It really takes away from the momentum of the game. Everything else is relatively standard. You can use stealth mode to hide behind buildings, or crouch under rocks. You can also crawl, roll, and jump without making a sound. By staying hidden, you are able to execute stealth kills. However, if you’ve been spotted by an enemy, then you engage in a melee fight. Rikimaru is stronger than Ayame, but also slower and has less combos. Due to the tank like controls, you’ll want to avoid detection because trying to escape some angry samurai or enemy ninja is way more difficult than it should be.

Since all missions take place in the middle of the night, expect to see darker, more subtle graphics. For a Playstation game, they still hold up well in some areas such as the environments and the enemy design. In other areas (i.e. everything else, characters included) things look a bit too blocky and archaic. Still, it gets the job done. Best of all, the ancient Japan inspired sound track fits perfectly.

I think the best thing about Tenchu: Stealth Assassins is that it paved the way for the series. At the time of it’s release, my guess is that Tenchu was one of the most sought after titles for gamers far and wide. The game showed gamers what it meant to be a true ninja. Despite some control issues and a dated look, Tenchu: Stealth Assassins has been able to keep me playing. Fans of the series who started late like myself should seek out the advent of the adventures of Rikimaru and Ayame. Stay stealthy!