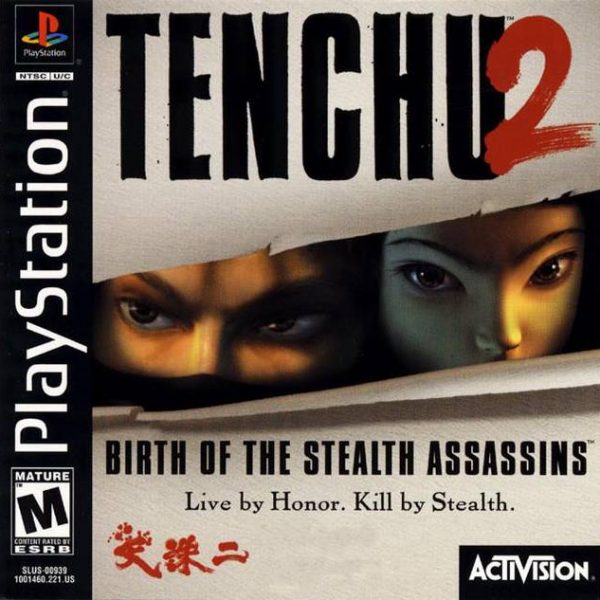 While a big, red number two in the title of Tenchu 2: Birth of the Stealth Assassin, fans of the series will be pleased to learn that this is actually a prequel to the first Tenchu. What does that mean, exactly? From a story perspective, we get some more insight on our favorite characters. From a game play perspective, not much has changed. This, obviously, has some positive and negative aspects. Sure, the stealth game play and the kills that go along with it remain entertaining. However, moving a nimble ninja with a tank-like control scheme can frustrate just about anyone.

As mentioned, Tenchu 2 takes place many years before the events of Tenchu: Stealth Assassins. Tenchu and Ayame have been training with a mentor named Shiunsai for years. Upon completion of their training, the two ninja as well as a third protagonist, Tatsumaru, become enlisted as members of the Azuma Ninja Clan. Of course, initiation is never smooth for hardworking ninja; the three must protect Lord Gohda and his disciples from an enemy ninja clan called Burning Dawn. Unlike the first Tenchu, players will get to learn a lot more about Rikimaru, Ayame, Gohda and plenty of new diabolical villains who absolutely deserve to insta-killed. The plot this time is far more satisfying and, yes, we get to see how Rikimaru earns that scar.

Well, scars aren’t the only thing he and the others will earn if they don’t make proper use of stealth; the key to victory in any Tenchu title. Remain unseen, and you officially become a true ninja. For starters, items are available such as shurikens, medicines, bombs and many others. Also, no ninja worth his/her salt leaves for a mission without a trusty grappling hook; perfect for zipping across rooftops. Missions in Tenchu usually involve you creeping about town and avoiding enemy detection. The controls are, for the most part, solid. Unfortunately, and this is a big unfortunately, Tenchu 2 uses tank like controls. It really takes away from the momentum of the game. Everything else is relatively standard. You can use stealth mode to hide behind buildings, or crouch under rocks. You can also crawl, roll, and jump without making a sound. By staying hidden, you are able to execute stealth kills. However, if you’ve been spotted by an enemy, then you engage in a melee fight. Rikimaru is stronger than Ayame, but also slower and has less combos. Tatsumaru favors the use of his fists, and is able to perform some impressive acrobatic assaults. Due to the tank like controls, you’ll want to avoid detection because trying to escape some angry samurai or enemy ninja is way more difficult than it should be.

While the story and variety in the missions is improved, one of the key features of Tenchu 2 is the Mission Editor. This allows players to create their own stages with unique objectives. It’s a fun touch, but in this day and age, I doubt anyone will use it. That said, building your own level with the vastly improved graphics can be entertaining. The graphics in Tenchu 2 not only look sharper, but some of the levels take place in broad daylight. The voice acting is also improved from before, with a solid cast backing up the solid characters many of the fans know and love. I’m not the biggest fan of Rikimaru’s new voice, but it’s important to keep in mind that the events in Tenchu 2 take place while he is still a young ninja.

In all honesty, Tenchu 2 suffers from the same major problem of the first: the controls. Had the controls been different, the game would still be close to perfection. Unfortunately, it’s far too troublesome going back to tank like controls. That said, I recommend Tenchu 2: Birth of the Stealth Assassin to fans of the series who wish to see the story related origins of the saga. With a new character, an improved look and some fun mission editing, Tenchu 2 continues the tradition of providing ninja-tastic fun to gamers.