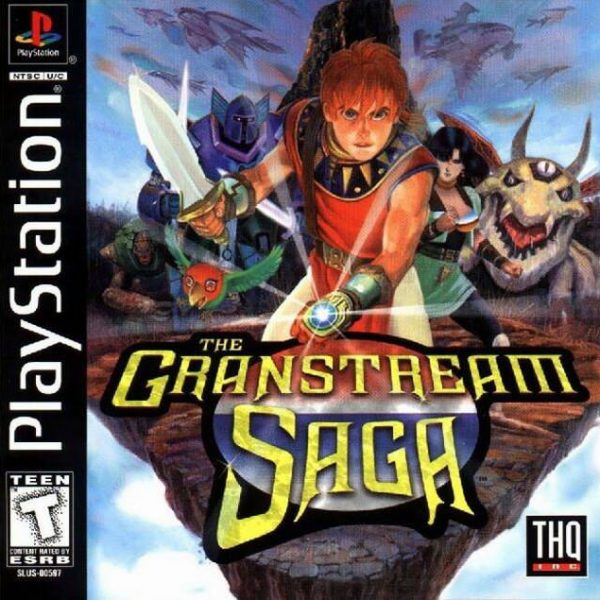 Author’s Note: This review was originally published on September 8th, 2009. Like other reviews around the time, this one features “witty” taglines that separate each section.

The Granstream Saga is an RPG that has every cliche, both good and bad, you have ever encountered since the dawn of the genre. Allow me to list some examples: Four elemental crystals? Check. A setting straight out of an anime? Check. A boy with mysterious powers and amnesia? Check. A love triangle? Check. You know what? I could go on, but I will stop. You get the idea. With all of these cliches, is it any wonder that I found so much enjoyment from this title? Now, remember, the game is far from perfect. Still, with the insane amount of cliche and the surprisingly intuitive battle system, The Granstream Saga turned out to be a fun title.

Abandon Continent! Abandon Continent!
In ancient times, war was raging between the Imperial Wizardry and the Spirits. After some ancient technology went awry, the four elemental continents of Granstream started to slowly plummet towards the raging ocean. On the wind continent, our hero, Eon, observes as his foster father, Valos, performs a magic trick that removes chunks of land to lighten the weight. Eon has no idea who is or where he comes from, but he does have a magical scepter that can restore objects to their original form. With this scepter in hand, Eon will set out to stop the lands from sinking, discover who he is, meet air pirates and maidens, and discover the ancient secrets of Granstream.

As mentioned, Eon meets up with air pirates and maidens. The characters in The Granstream Saga were pasted directly from an anime circa late 80s/early 90s. I loved each one of them. Seriously! Despite me being able to predict how they were going to act hours before certain events happened, I found myself wanting to learn more about Eon and his friends. Oh, and let’s not forget the dialogue. Oh, the dialogue! Even when the situation was supposed to be serious, the cheesy, early anime dialogue made me crack up. Despite the writing, the game throws a rather surprising plot twist at you in the end. Even with this twist, the words exchanged by the characters during said twist were endearingly cheesy.

Poker Face.
After the initial anime sequences, you will see that something is amiss with the graphics in The Granstream Saga. This something made me chuckle in delight. The characters have no faces. No, I’m for real. There is nothing drawn on the characters! No eyes, no noses, no mouths, no nothing! I found this to be utterly ridiculous at first, but eventually I got used to it. Oddly enough, the rest of the game looks nice for an early PSX title. The polygons are a bit blocky, but they are also colorful. The environments are easy to navigate and explore. When you enter a battle, your weapon and armor show up on Eon, instead of just having a generic outfit. This was a nice touch, but it still cannot recover from the lack of faces on the characters.

Anime Audio.
Besides the battles, the music really caught me by surprise in The Granstream Saga. The pleasing melodies in towns, the upbeat and exciting rhythms of the battle tracks, and everything in between were not only well composed, but they rarely repeated themselves. With the abundance of anime scenes, it was a good thing that the voice actors and actresses were familiar faces from various anime titles from the time of the game’s release. Again, it was cheesy at times, but it helped move the story forward.

A Slashing Good Time!
In dungeons and the like, you see enemies doing their thing, minding their own business. When you encounter one, the screen switches to a battle shot and the fun battles can begin. The Granstream Saga has battles that play out like they do in basic fighting games,only with a topography perspective. Eon can use an axe, a sword, or a dagger, as well as magic to best the foe he faces in the one on one battles. He can also guard, dash, back step, and maneuver so he can find the opening to the enemy. Like a fighting game, rushing in full force will get you killed. Instead, you have to find a strategy that works best for the various types of enemies, learn their pattern, and go in for the kill. Surprisingly, this can be quite a challenge! Luckily, the challenge was worth it and the game’s battles never got old.

Do the Math.
So, now that you read all about the wonderful, cliche stuff in The Granstream Saga, you are probably excited to go buy it, yes? Well, when you do, note the back of the game case. It claims to have 40 to 60 hours of game time. Unfortunately, they were off by a bit. By a bit, I mean a ton. I finished The Granstream Saga, with all of the side quests, in about 10 hours. However, I picked up the game for under 10 dollars. I would say I got a fair trade! Truthfully, The Granstream Saga can hardly be considered the best RPG in the world, but it is fun for what it has to offer. If you are looking for a simple, overly cliched RPG that tries to be serious but fails, then pick this up. Those looking for something a bit more serious, long, or complex should stay away. While it does have every cliche in the book, it does not stop it from being a fun game.