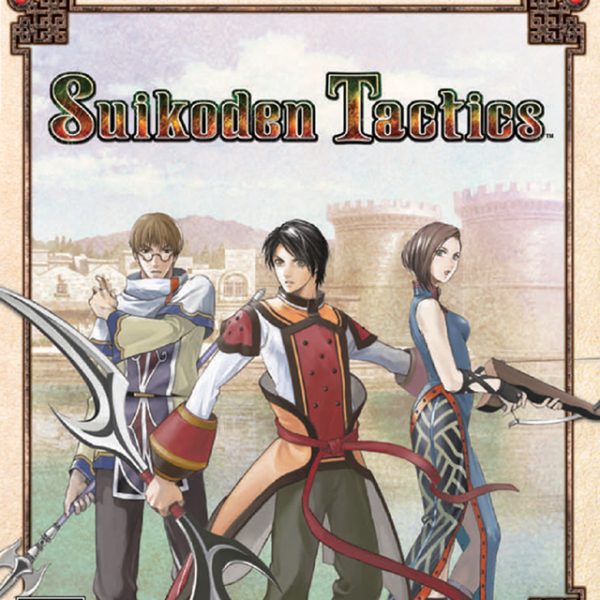 Author’s Note: This review was originally published on September 4th, 2007. Like other reviews of the time, this one features “witty” taglines that separate each section.

Perhaps I am going to just have to deal with the fact that Suikoden is not the series for me. There’s a reason why I didn’t pick up Suikoden II, even though it was right in front of me at one point. I just cannot get into the series, at all. Even in the SRPG world, Suikoden is hurting. There were some good ideas in Suikoden Tactics, but the problems make it unplayable for those looking for a decent SRPG experience.

War on the Shore
Taking place some years before Suikoden IV, Suikoden Tactics puts you in the shoes of young Kyril. After witnessing his father’s death from the powers of the vile Rune Cannon, Kyril and his friends decided to continue on his legacy and put a stop to these devices. They set sail on a semi-cliched adventure through the seven seas in the hopes of stopping the Rune Cannons. Oh, and sometimes, the Rune Cannons turn their victims into fish-men, which I found to be humorous. Anyways, Kyril’s quest is typical Suikoden style. There is the goal of stopping the Rune Cannons, as well as stopping various countries from going to war. Throw in some shallow (Get it? Shallow? Like shallow water?) character development and elements of loyalty, trust, love, betrayal and drama and you got yourself the basis of the plot for Suikoden Tactics. It’s not so much that it’s bad because I like the idea of having a pirate’s life on a vast ocean. It’s more along the lines of it being too similar to other Suikoden games, which ultimately, I never liked in the first place.

Wurr Mah Crew At?!
The stand out feature of Suikoden has been their 108 Stars of Destiny. There are usually 108 characters to recruit. While over half of them never develop or flesh out, the few main characters can become more interesting over time. Such is not the case in Suikoden Tactics. First of all, you cannot recruit the usual 108 Stars of Destiny. This time around, you are only given about 50. As usual, you will learn more about the main characters throughout the course of the game but the rest of them get lost in a sea (Heh, another water joke…go me) of generics. What is worse is that you don’t get to build your own castle this time around. Those were some of the best features of Suikoden, and the took it away in Suikoden Tactics.

Argh! My Eyes!
Graphics do not make a game, but they sure as hell help. Unfortunately, Suikoden is lacking in the graphics department. While the environments and battlefields look nice enough, they lack detail. Since this is a strategy game and since these sort of battles take longer than usual, you will be often times stuck looking at the same dungeon or ship for nearly an hour. The character designs are not much better. Their attack and magic animations look fine, but they look like a busted, blocky mess. Half of them look like they are wearing bell bottoms from the 1970s. During conversation, they may move around a bit, but their movements are slow and clunky. Luckily, their character portraits were beautifully drawn and depict their moods during conversations. Yet for some reason, the artist neglected to give NPCs, townspeople, and other things of that nature eyes in their portraits. No, seriously. They don’t have eyes. On the battlefield they have eyes (sort of) but in their portraits, they lack eyes. I guess that means they are unable to say, “Eye Eye Captain!” Get it? You should be writing these down.

Seas and Sounds
Despite the flaws thus far, Suikoden Tactics has a rather impressive soundtrack. While there are a few tunes that need some work, the rest of them were enjoyable. There is nothing epic, by any means, but the music is one of the better aspects of the game. Sounds of the waves crashing onto the shore and the clank of swords were spot on. The bad thing about the sound is the voice-acting. A few of the actors did an average job at best, whereas the rest of the voice acting sounds abysmal. You are able to turn it off, and you are just as able to skip through a dialog sequence quickly by pressing the triangle button. The bad thing about doing the latter option is that even if they are not speaking, the characters still have to carry out their pre-programmed motions. Confused? Well, it goes like this. Say a person says something short, like a simple yes or no. Pressing triangle will take you to the next text box. Now, if a character has something longer to say and you hit triangle, you will not be shown the next text box until that aforementioned character is done acting out what he is saying. It’s hard to explain, but it almost makes having the triangle button feature pointless since you will have to suffer through the monotonous conversations one way or another.

Setting Up Camp
Like most SRPGs, you are unable to walk around towns and dungeons. Instead, you have to move the cursor to whatever it is you wish to do and hit the X button. In the camp menu, you are able to set up your various skills and equipment. It is here you can also find out what it is you need to do next. If you are in a town, you can visit the various shops or talk to the townsfolk. Sometimes, talking to the villagers will allow you to unlock a side-quest. These can be performed at the guild. By completing these, you may get items or even recruit a new character for your party. Like other Suikodens, your characters only have one weapon. Taking it to a blacksmith will allow it to gain an increase in power. Runes make their return again, given you some flexibility with the way you wish to have your characters perform on the battlefield. When you are done with the town, you can point and click to your next destination and sail the seas until you reach it.

SSSSRPG (Super Slow Suikoden Strategy Role Playing Game)
If you’re able to read, then you most likely figured that this game has a slow battle system, even by SRPG standards. With most SRPGs, I expect battles to take longer than they would in other RPGs. However, Suikoden Tactics seems extra slow. However, it does have some good things for it that new strategy players may enjoy. Veterans, on the other hand, may feel differently. When a battle begins, you chose your members and do any last minute touches with their equipment. On the battlefield, you’ll see the turn order on the top of the screen. Most of the time, there will be more enemies than allies. When your turn comes up, you move the player within their designated range and then have some options available. Besides attacking and casting magic, characters can talk with each other. Doing this enough times allows you to learn combination attacks. This also allows you to develop relationships with other characters who may assist you in attacks or guard you from damage. Once your turn is over, it is the next person’s turn. This continues until the battle requirements have been met. In the event you lose, you can start over with all of your items restored. Also, you will have the same level of experience you had when you first lost. This actually happened to me more times than I liked. The game is not hard, but it’s broken.

The reason I say broken is because of the elemental alignment. Every character on the battlefield has an element associated with them. By using certain spells and items, you can change the ground to be one of these elements. Stand on the elemental square with your corresponding element, and you gain a huge boost in power and restore some HP after your turn. Stand on the opposite element, and suffer the consequences. This was fine, but what got me the most was just HOW powerful someone can become with the elemental squares. A level one foe can decimate a level six character with this system. This is why it was such an annoyance to battle. Couple that feature with the snail like battle pacing, and it is easy to see that this SRPG is missing some polish. Some characters are cursed with being permanently dead should their HP reach zero, even when the battle is over. This wasn’t a huge deal, because you could easily start over but it royally sucks doing this due to how long an entire battle can take.

Besides monsters, there are treasures and boxes for you to find on the battle-field which contain items. Often times you’ll have to guard an idiotically controlled AI from getting himself killed from monsters. When the fight is over, you get some items and a ranking. I enjoyed the battles, but only in small doses. However, with the fights lasting so long, a small dose is not enough to finish a battle-field. The ideas thrown in sounded interesting on paper, but actually sitting down and playing was not as fun as it sounded.

Next…
I like SRPGs, as long as they are well made. Suikoden Tactics was not well made. If you like the Suikoden series, even you may have a hard time getting into this game. Only check it out if you wish to be easily lead into the SRPG genre, despite the fact that the battles can be a bit screwy at times. While it only lasts about 30 hours, it could very well take you longer if you wish to fulfill all the guild requests. Obviously, I am not going near this game again. Suikoden Tactics may have a few little things going for it, but overall, it is another reminder to me as to why I just cannot stand the Suikoden series.