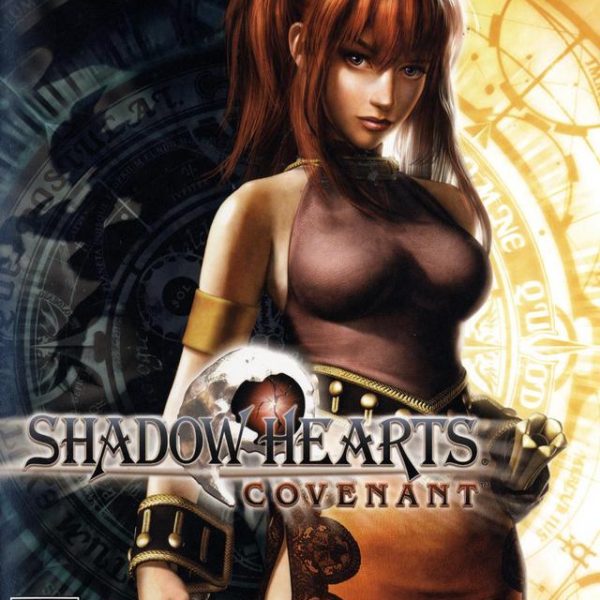 Author’s Note: This review was originally published on May 5th, 2005. It was later updated with “witty” taglines on November 4th, 2009. I’m not sure why I decided to make the update; I feel like the overall tone of this review remains consistent with the way I wrote when it was first published.

World War Fun.
After the assassination of Arch Duke Ferdinand, the flames of war spread through Europe and World War I began. German troops have been wiped out in the quiet village of Domremy by an unknown force. Survivors claim the reason to be a demon! Lt. Karin Koenig of the Imperial German army has been sent with Cardinal Nicolai to Apoina Tower to retrieve a holy item that can be used to protect the German army from this monster. Little does Karin know that the monster is actually a human: Yuri Volte Hyuga…the legendary Godslayer. Nicolai is working for the dark organization Sapientas Gladio and will stop at nothing to destroy Yuri.

While some knowledge of the first SH makes a few things less confusing , SH2 is an all new story with an all new cast of cool characters. The story, as expected, is set in the real world. There are twists here and there that will surprise you and you’ll meet some characters who actually were alive in our world during the first world war such as kings and generals. The new cast of characters is just as vibrant and unique as ever. A white wolf, a puppeteer, and a bunch of other fun people will join your quest. Each character has a unique story to tell, much like the first game.

Judgy Wudgy was a Bear!
The Judgment Ring is back again. I’ll explain this first since it is what you’ll be seeing throughout the game. The Judgment Ring is a circular disc that has three or more sections at different locations. The ring has a bar that spins in a clock wise motion. You have to hit the X button while it’s in the section to continue the bar’s moving. If you miss, then you’re done. The Judgment Ring mainly appears in battle, but you’ll see it elsewhere, too.

Yuri and his friends have a lot to do in when they’re not battling. Each individual character has his or her own way of learning new moves. Lucia must find Tarot Cards and Aroma Oils, Joachim needs to battle his master, the Great Gama, to become the number one pro wrestler, and Karin needs to obtain scripts from an opera to learn new sword moves. That’s just a sample of what you can do to power up (and learn more) about the wide cast of characters. Besides the usual side-questing, you can hunt down Crests. Crests are what allow your characters (except for Yuri and Kurando) to use magic. After a certain event in the game, you’ll get Solomon’s Key. You can use this to place your Crests in specific locations and power them up. Another thing you can do is, of course, shop. When you shop you are given the option to go for a discount or a mark-up. If you want to, you have to hit the marks on the Judgment Ring properly or you end up buying or selling at the regular price. A cool new feature is to customize the Judgment Ring for battles. You can add status effects and you can increase the number of attacks.

Battles are quite similar to the battles from the first Shadow Hearts. As you walk around a dungeon area, the screen breaks and you see your team in battle. At the top of the screen you see the turn order. You can have four people max in a battle. Like most RPGs, you have the standard commands. There is Attack, Crest Magic, Item, Defend, and Run Away. Each character has his or her own personal skills. Yuri has Fusions, Kurando has Demon Morph, etc. New to the series is the ability to perform combos. You select Combo from the command menu and then choose with whom you want to perform the combo. You can have at most a four person combo. The higher the combo, the more bonus damage. If you miss the Judgment Ring, however, the combo ends. The battles are a lot of fun and very fast paced, but the Judgment Ring can cause some problems. When you increase the number of attacks, you add more sections to the Judgment Ring. The bar spins at a very high speed, and trying to land perfects on all of them can create some difficulty. Yes, there are certain accessories that slow the speed down…but later in the game you are going to want to equip better accessories so you can do more damage. It gets really frustrating after a while. Still, battling is a lot of fun. You’ll be seeing plenty of the Judgment Ring. Thus, you better learn to love it.

The Dark Ages.
Really, I found no problems with the graphics. A lot of people seem to be complaining about them but, I really don’t see why. They’re colorful, detailed, and they have realistic motions when you see them interact. I think they look great. The same can be said about the backgrounds. The architecture of some of the areas was done very well, especially in places like Paris and Russia. There are lot of objects to interact with and search for treasures as well, so that’s a major plus. The NPCs look a little bland, and some of the monsters are too bizarre for their own good, but overall the graphics look great.

Now, the music could be better. The town music is nice, but everything else could use some improvement. The battle music is dry, all tracks repeat themselves far too often, and really there are no memorable songs that will get stuck in your head. I expected better, but whatever.

The voice acting was done very well with a great cast of characters. There’s not much else to grade on sound. Each hit, slash, and step sounds right and is always on cue…no complaints here.

A Farewell to Arms.
When you finish the game, starting a new game will grant you some new goodies, but there really is no need to play through it again. The story is easy to follow so you won’t miss much. But don’t worry, the game took me 50 hours, so it will last you quite a long time.

I had a blast with Shadow Hearts II. The characters, the setting, the battles and nearly everything else was tons of fun. I may not play this game again for a long time, but I’m glad I finally was able to try it out and follow Yuri on another adventure. If you want a solid RPG, then Shadow Hearts II is the way to go.