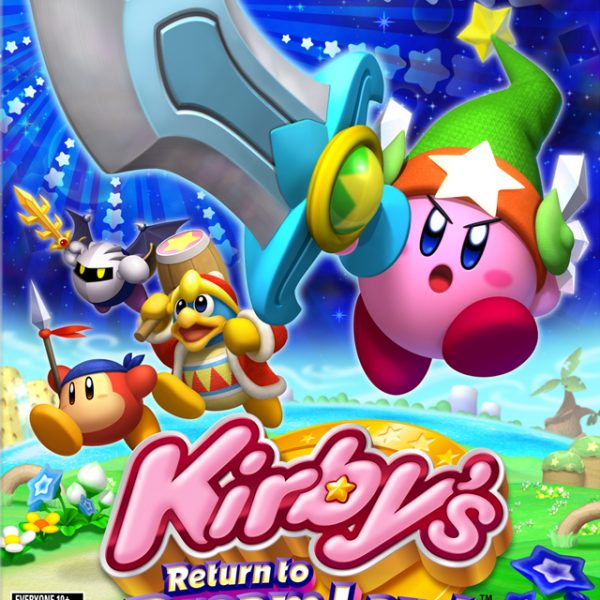 Kirby’s Epic Yarn was epic indeed. And yet, it felt as though something was missing. For me, the thing I missed the most was Kirby’s token ability to inhale enemies, release puff balls, and copy the abilities of certain foes. This is where Kirby’s Return to Dream Land comes in. Despite the creativity and “aww” factor of Epic Yarn, there is something comforting about a traditional Kirby title like this one. Kirby isn’t the only one returning to Dream Land. Alongside our favorite puffy protagonist, favorite characters, classic game play features and a plethora of bonus content make their return, too.

Kirby’s journey begins as innocently and as adorably as expected. While running through some verdant surroundings with a cake, Kirby, Waddle Dee, Meta Knight and King Dedede look to the sky to see a wormhole opening. A bizarre spaceship emerges from it and crashes into the ground. Inside is an alien named Magolor. Due to the unexpected crash landing, Magolor’s space ship is out of order. Kirby and the crew decide to act like the good Samaritans that they are and assist their new friend in finding all of the remaining ship parts that scattered throughout Pop Star. In a unique spin on a classic formula, Kirby isn’t battling King Dedede or Meta Knight. These two characters, as well as a bandanna-wearing Waddle Dee, join forces with Kirby to help him track down the missing parts of the ship. I really enjoyed seeing these four characters come together for a common goal. As expected there is more to the story than meets the eye and the crew will learn more about Magolor the closer they get to finding all of the missing ship parts. It’s a good, old-fashioned fun type of story that has the same level of seriousness you’d come to expect from any Kirby title.

Return to Dream Land is an absolute delight to play; packed with 2.5D platforming glory. Veterans and newcomers alike will be able to dive right into the fun. Kirby can do all of his usual tricks: he can float, shoot puff balls, slide, swim, and inhale enemies to be either shot as projectiles or swallowed. The most important ability that makes a triumphant return is the copy ability. Kirby can copy the abilities of certain enemies after he swallows them. Fans of modern titles like Super Star and Squeak Squad will be pleased to know that each ability has a unique set of moves that keep the game play fresh. Favorite abilities like sword, cutter and wing are back and still enjoyable to use. Of course, there are some new abilities (and accompanying hats) that deserve a special mention. Whip lets Kirby snag and throw enemies, reach levers and turn Kirby into whirling lasso of destruction. The Leaf ability lets Kirby hide in a pile of shrubs and attack enemies with slicing leaves.

New abilities are just the start of the new features in Return to Dream Land. First, there is Kirby’s super-inhale. By shaking the Wii controller, Kirby will inhale nearly everything in his way. Some abilities can be powered up. For instance, Kirby’s sword ability can be turned into a massive weapon of destruction that would make Cloud Strife jealous. The downside to these Super Abilities is that they have limited uses and are often needed to solve puzzles or find hidden collectibles, thus it’s important to not go crazy the moment Kirby becomes an unstoppable (but still adorable) force. Finally, Return to Dream Land has a magnificent multi-player option. Three additional players can join in on the fun as a differently colored Kirby, or as one of the other characters. Waddle Dee uses a spear, Meta Knight uses a sword and King Dedede uses a hammer. Their move sets are similar to Kirby’s copied abilities (spear, sword and hammer respectively) and watching these four wreak havoc across the screen provides plenty of fun.

Whether you’re playing by yourself, with Dedede and the crew, or with another colored Kirby, Return to Dream Land is a blast. There are countless secrets to uncover, plenty of ways to overcome enemies, and some impressive boss battles that take more strategy than one would expect. Unlike Epic Yarn, Kirby has a life meter that drains with each hit. Obviously, this means he has a limited number of lives. That being said, Return to Dream Land is only slightly more challenging than the average Kirby title. Certain collectibles/puzzles require more thinking than expected, but with the ability to enter and exit stages with ease, obtaining all of the items should come easily. I highly recommend taking the time to do so because the more stuff you find in the main game, the more bonus stages you unlock. Return to Dream Land features some of the most fun bonus stages ever seen in a video game. These bonus stages are dedicated to one of Kirby’s copy abilities and require you to master it as you defeat enemies, gather coins and finish the stage as quickly as possible. Out of all of the bonuses available in Kirby history, these are the most fun.

Kirby’s Return to Dream Land is a gorgeous and vibrant looking game; an opened jewelry box that glistens in sunlight. The 2.5D play-style with 3D models pops and sparkles. Kirby and the crew will explore a variety of worlds as they search for the missing pieces of Magolor’s ship. Enemies, new and old, big and small, plain and fancy will try to hinder your progress. My biggest issue with the presentation is the music: it’s forgettable. Every other aspect of the game is fantastic, so I might be judging too harshly. On the other hand, I am never able to recall any of the tunes. I’m just being nitpicky at this point; it should be apparent that I rank Return to Dream Land highly.

And it’s because I rank it so highly that I recommend it. The game is over in about ten hours, depending on how much you want to find. Finishing the game unlocks more bonuses, and the multiplayer option ensures that no two sojourns through the same stage will be similar. As someone that grew up with Kirby and has plenty of memories from multiplayer titles like Super Star, Kirby’s Return to Dream Land is the perfect title.

Overall, 9.5/10: Sure, I’m slightly biased because I’m a big Kirby fan. But, aside from some music issues, this game is puffy perfection.