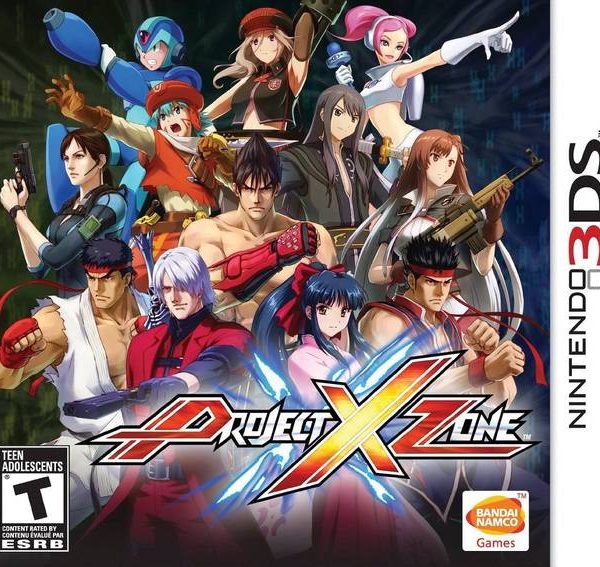 In my entire lifetime as a gamer, I don’t think I have ever played a game as crazy, flashy and over-the-top as Project X Zone. PXZ combines heroes and villains from a huge list of games, puts them in a new story, creates hilarious and fun dialogue between all of the personalities and keeps everything together with an addictive, combo-heavy battle system. Like I said, this is a crazy game that fans of RPGs and fans of the characters from the gaming worlds will easily enjoy. This is how you do a crossover game. Are you paying attention, Idea Factory?

Despite the large cast of characters, the two characters who are running the show are Kogoro Tenzai and Mii Kouryuuji. Kogoro is a detective, tutor and ninja who is helping the affluent Kouryuuji family recover a stolen artifact. The eldest daughter, Mii, decides to go with him. While Mii is a bit of a smarty-mouth, she is also a cheerleader who can kick her stiletto heels high and wield two customized guns with ease. The two end up meeting a huge batch of people from across time and space (i.e. video games), and all need to help Mii recover the artifact due to the potential of them being trapped away from their homes forever. This is the overall theme of the story until you reach the final chapters. By then, you’ll learn why Mii’s house was robbed. Before that point, you’ll be dealing with the same old back and forth dialogue that leaves you without any answers. When the climax does occur, it’s not very satisfying.

The true focus of the narration is with the characters. Have I mentioned that there are tons of them? Well, I’m mentioning it again. Here is a sample of who you will see. Can you pick out the games they’re from? Ryu, Ken, Mega Man X, Zero, Juri, Akira Yui, Pai, Haken Browning, Frank West, Morrigan, Dante, Yuri Lowell, Gemini Sunrise, Kite, Black Rose, Zephyr, Vashyron, Leanne, Jin Kazama, Heihachi, Alicia, Soma, KOS-MOS, T-elos…the list goes on. And on. And on. The best part of this? All characters get equal screen time. They never lose their personalities, either. Seeing this amalgamation of personalities come together is an absolute treat. There was the potential for it to be disastrous, but the excellent translation makes it so all of the characters stay true to themselves as they help Kogoro and Mii uncover the secret of her artifact known as the Portal Stone. Mii and Kogoro make an excellent duo, as well.

To recover Mii’s stolen good, battle needs to happen. And let me tell you! Battle certainly does happen. Despite the linear nature of PXZ, there are plenty of monsters to battle. Kicking their butts never grows old. While the surface of PXZ is a strategy game, actual fighting is a similar to games like Valkyrie Profile where timing is key. The game consists of pair-units and solo-units. Pair-units cannot be changed, but you can assign a solo-unit to them that fits your play style. When it’s one of your PU’s turns, you can use items or use skills. Skills require points from a meter that is about to be explained.The fun begins when you attack an enemy. Characters will learn up to five moves that can be performed to create a combo against an enemy. The combos and hits happen fast, so proper timing will be needed to pull off all of the moves and defeat your foes. As you deliver hits, you can summon your SU to add to the count. Furthermore, you can summon another PU if they are in range to add even -MORE- hits to your combo count. But, my dear readers, there is more! As you lay waste to a foe, a meter builds up. Once it reaches 100%, you can unleash a devastating special attack that adds to the over-the-top nature of the frenzied fighting. A neat thing about summoning another PU or your SU to the battle is that will place an icon over the foe if the hits keep coming. This will grant you the potential to build that meter from 100% to 150%. The best part of all of this is that a lot of their moves will be easily recognized from the respective games. It’s utter chaos, and it’s the most fun I have -EVER- had on my 3DS. Even when things seem overwhelming due to a high enemy count, your heroes are always able to come out on top. By the end of a battle, you’ll be wishing more reinforcements showed up. When an enemy attacks you, you can defend, counter or use up more of your meter and defend from 100% of the damage.

A turn ends when you can no longer attack. From here, you’ll gain items and experience points. When a stage ends, you’ll be taken to a menu to equip gear and practice PU/SU combinations. There is also a tutorial, a glossary and an opportunity to save your game. The formulaic nature of PXZ is familiar, but the battles are what set the game apart from other RPGs. Another thing that makes it stand out is the look. This is a gorgeous game with or without 3D turned on. The battle maps appear to be a bit ancient, but the battle sequences are a sight to behold if you can keep up. Watching gorgeous 2D sprites duke it out back and forth in flashy fighting is a stylish treat. When special skills are executed with the Y button, an anime cut-in occurs to add to the effect that the monster is about to get beat to a pulp. And yes, you’ll get to witness plenty of jiggling going on as some of the more busty heroines perform their special attacks. Along with gorgeous visuals is nostalgic music. When a certain PU/SU turn arises, music from one of their respective games will play. The memories will overflow out of your ears. Note that PXZ is voiced in Japanese only.

Whew! That’s a lot of praise for this 40 hour game. Despite some silly looking maps and a story that never picks up pace, it should be obvious that I recommend Project X Zone to nearly everyone. If you pick up the special version of the game, you will be treated with an art-book, a poster, and a CD with a bunch of music from the game. I think one of my favorite things about PXZ is that it got me interested in a variety of titles. Thanks to Project X Zone, I am now the proud owner of Namco X Capcom, Gods Eater Burst, Sakura Wars: So Long, My Love and Endless Frontier OG Saga. You know what that means? That’s right, folks: expect reviews of those games coming at you in the distant future! Seriously, those are some long games so it will be a distant future before I can get around to writing about them. You can wait for that, right? Anyways, anyone who owns a 3DS will do well in checking out Project X Zone. You’ll come for the large cast of characters, but you’ll stay for the chance to control them all in supremely fun battles.