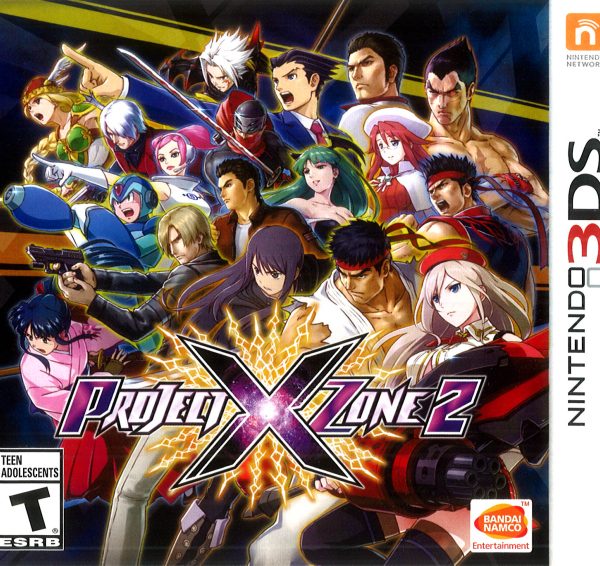 Project X Zone was a chaotically fun game that brought heroes and heroines from across the gaming universe together to fight for the greater good. Or maybe, it was to prevent the world from blowing up. I can’t recall. Like most crossover titles, the story in PXZ took a major backseat so the characters could interact with one another and create flurries of over the top combos to destroy waves of enemies. Project X Zone 2 promised more of this, content-wise. It should go without saying that Project X Zone 2 is very similar to the first one. Thus, if you enjoyed the madness with Mii and Kogoro, then you’ll enjoy the return of said madness in the sequel. The question is whether or not you’re willing to sit through even more dialogue and put up with more interruptions before the story, which is slightly better than its predecessors’, begins to take off.

The story in Project X Zone 2 begins in Shibuya, near the Shinra headquarters. Shinra Agents Reiji Arisu and Xiaomu have been given a new task to investigate mysterious gold chains that appear out of thin air. Their investigation leads them to different worlds that are experiencing the same problem: golden chains that materialize for no reason. Something is not right. It’s up to these two heroes and a collection of others from across time and space to get to the bottom of these spacy shackles and prevent another disaster. That’s all you’ll need to know for the most part, story-wise. In fact, you can skip the story events starting with the prologue to the 25th chapter and still be in the know. Chapter 26 finally reveals some information about the chains as well as the ambitions of the organizations that wish to use them. Then, you can continue to hit the skip button if you feel the need until the chapters reach the late 30s. With only 42 chapters, you can imagine that most of the dialogue lacks any valuable, story-related information.

And there is plenty of dialogue. Some of it is worth the read. Remember, this is a crossover title. This means that characters from across the gaming world will be able to chit-chat about all sorts of things with entertaining results. Fans of Namco X Capcom will be especially pleased to not only see Reiji and Xiaomu take center stage again, but to see that Xiaomu’s hilarious video game references have as much biting wit as ever. New characters include Hotsuma and Hibana from the modern Shinobi titles, Hiryu from Strider, Lucina and Chrom from Fire Emblem, and Ciel and Nana from God Eater. Returning favorites such as X, Zero, Ryu, Ken, Yuri, Flynn, Estelle and more are back for the fun. Seeing so many unique personalities does have its highlights, but there will be times when you will just want them to stop talking. There is a balance that should be kept when including so many characters in the same game. However, it feels like you spend more time advancing text than customizing your team and/or fighting waves of goons, gameplay-wise.

Project X Zone 2’s systems will be familiar to fans of the first game. Pair units have a set of passive skills and attacks that can be enhanced by spending points earned from battle. As pairs level up, they will learn more passive skills and attacks. Solo units can be placed with pair units and have their own set of passive skills that can be equipped. However, they only have one attack and upgrading their attack is costly, CP-wise. Finally, each pair unit can equip two accessories. There is a shop available that lets you purchase new equipment, as well as recovery items. Finally, you can check out the “Crosspedia” to learn more about the characters, worlds, and enemies. Finding the right combination of abilities and solo units is just as fun as it was before.

Similarly, putting them to use in battle is just as fun. The training wheels come off after the prologue sequences finish. At that point, you’ll be able to perform high numbered combos and flashy finishers. Project X Zone 2 is a strategy game on the surface. You move your team across a battlefield and attack an enemy when you’re in range. Items and skills can be used at any time during your turn. When you engage in a fight, the real fun begins. You need to time your attacks in order to juggle your unfortunate foe as much as possible. For those that haven’t played the first game, think of something like Valkyrie Profile, battle-wise. Furthermore, you can summon another pair unit if they’re in range as well as your pre-set solo unit. Numbers and special effects will be flying from every direction in the screen, but as long as your hits connect, you will be able to build your XP bar. It will take a bit of experimentation to figure out which attacks work best with which solo unit. It’s important to find combinations that work. When the XP bar reaches 100%, you can unleash a powerful finishing attack that makes the previous showy shenanigans from regular attacks look tame by comparison. Certain battles require you to protect a unit or prevent an enemy from reaching a designated spot, but most of the time you need to destroy enemies and bosses that stand in your way. During the enemy’s turn, you can defend with your units’ SP or with the shared XP bar. Really, if you played Project X Zone, then you’ll know what to do. A new feature in battle is the Mirage Cancel. Honestly, I never needed to use it because Project X Zone 2 is an easy game. Sure, some enemies hit hard, but I never feared getting a game over thanks to the cornucopia of resources available.

Not to beat a dead horse, but Project X Zone 2’s graphical presentation was another aspect copied from the first game. The field sprites look the same, which is to say that they look plain, but functional. Battle is where the graphics shine the brightest, looks-wise. Not only are there a variety of new enemies and attacks, but there are new animations to enjoy. Best of all, there is a fantastic anime movie at the start of the game. I really wish they had more of these, because it really gets you pumped for the adventure. The collection of music comes from each character or characters’ respective games, thus you can expect to hear plenty of familiar and/or forgotten tunes. Of course, there are some new ones as well that add to the techno-pop vibe of the sound track. The entire game is voiced in Japanese, so people in Camp Dub Only should beware of that.

Another thing to be cognizant of is the game’s length. Project X Zone 2 lasts only 40 hours. If you skip most of the fluffy dialogue, it can be finished earlier than that. Unlike Namco X Capcom or the first Project X Zone, this sequel is short, comparison-wise. The odd thing is that the seemingly endless bantering makes the game feel longer. It’s an odd conundrum, but “odd” is what I have come to expect from these crazy crossover titles. Ultimately, I enjoyed Project X Zone 2 and recommend it to those that enjoyed the first one like I did. It has more missteps than its predecessor, but the chance to have Hibana team up with Yuri and Flynn (just to name one of many examples) makes those missteps negligible.

Overall, 7/10: Project X Zone 2 comes highly recommended to fans of the first game and to fans of crossover titles. Don’t be afraid to hit the START button to get to the good stuff, story-wise.