Mega Man is all about that Bass. 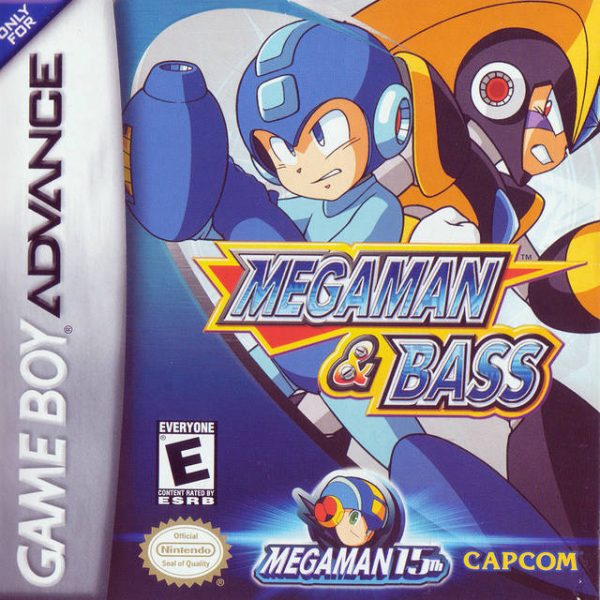 Mega Man & Bass is a spin-off title in the long running Mega Man universe. Originally known as Rock Man & Forte on the Super Famicom, Mega Man & Bass is one of the most challenging titles in the series. Despite it’s modern look and multiple features, only the most seasoned Mega Man experts will have the patience, skill, and time to fully uncover everything the game offers. Those that do, however, are in for a treat.

Mega Man & Bass takes place after the events of Mega Man 8. A mighty robot named King has stolen data from Dr. Wily’s abandon labs. With the data, he has created a personal army of robots bent on taking over the world. Mega Man is on the scene to stop him. However, he’s not the only one that wants to put a stop to King’s scheme. His formal rival Bass has decided to put a stop to King’s plans in order to prove to the world that he is the strongest robot in existence. The story remains the same 99% of the time no matter which of the two heroes you use. That said, the events in Mega Man & Bass are predictable. It will come as no surprise that there is more to King than just a powerful robot yearning for supremacy.

The real fun in Mega Man & Bass comes in the classic and challenging gameplay. At the start of a new game, you can select to play as either Mega Man or Bass. Mega Man plays just like he has since Mega Man 4. He can charge his shots, slide, and perform a jump that always seems to be just shy of getting you across a bottomless pit. Anyone will feel right at home deciding to play as Mega Man. Playing as Bass opens up new possibilities to combat enemy robots. Bass can rapidly fire his arm cannon in eight directions, but he can’t shoot while he’s walking. Furthermore, his shots can’t pass through walls. Bass is also able to double-jump and dash along the ground similar to Mega Man X or Zero. Both characters need to go through various levels filled with traps, enemies and a boss at the end. Not all boss robots are available at the start of the game. For instance, the only way to have access to Burner Man’s stage is to finish Cold Man first. Aside from recovery items, enemies have a chance to drop Bolts. These can be used to buy unique upgrades for Mega Man or Bass. For instance, Mega Man can buy an upgrade to summon Rush or Beat whereas Bass can buy an upgrade to summon Treble. Finally, each stage has a variety of data CDs to find. These CDs provide profiles for characters across the Mega Man universe. With 100 CDs to find, completionists will have a blast looking for all of them and learning more information about each character.

The gameplay is a mixture of classic and new thanks to having the option to pick either Mega Man or Bass. However, no matter who you pick, the challenge will remain high throughout the majority of the game. Mega Man & Bass is one of the most difficult games in the Mega Man universe. The stages are full of perils that will often require blind jumps, trial and error, and plenty of extra lives. Most of the bosses are absolutely relentless. Even if you find their weakness, you still need to always be on your toes because each boss has a variety of moves in their arsenal that will drain your health quicker than expected. You can purchase as many upgrades as possible and still get the game over screen. Finally, the game isn’t forgiving when you get a game over because you will be forced back to the very beginning of a stage. This is especially disheartening during the later levels that consist of challenging mini-bosses. Despite this unforgiving challenge, the fun never stops and the feeling of triumph is usually worth the pain previously endured.

Due to it being a port from the Super Famicom, Mega Man & Bass is one of the better looking Game Boy Advance games available. The 2D sprites are animated and colorful. Each stage has a theme that reflects the personality of the boss at the end. Unfortunately, and unexpectedly, the music didn’t get fare as well. This is a series known for it’s music and it’s upsetting having to listen to tunes that don’t get you in the mood to save the world as the Blue Bomber or his newest rival.

Despite the challenges ahead, Mega Man & Bass can be completed in less than five hours. Since the game doesn’t require passwords for saving, you can save the game at nearly any time and pick it up later. Those that wish to play as both Mega Man and Bass, as well as uncover all of the CDs are looking at a much greater play time. Being a Mega Man title, there is always a vast amount of replay value and lasting appeal. Mega Man & Bass is another solid entry in one of the greatest video game series’ of all time. Those new to Mega Man might be put off by the high difficulty, but those that have been with Mega Man since his humble beginnings will welcome it.

Overall, 7/10: Mega Man & Bass combines new and old gameplay styles that get tied together in a challenging and fun package.