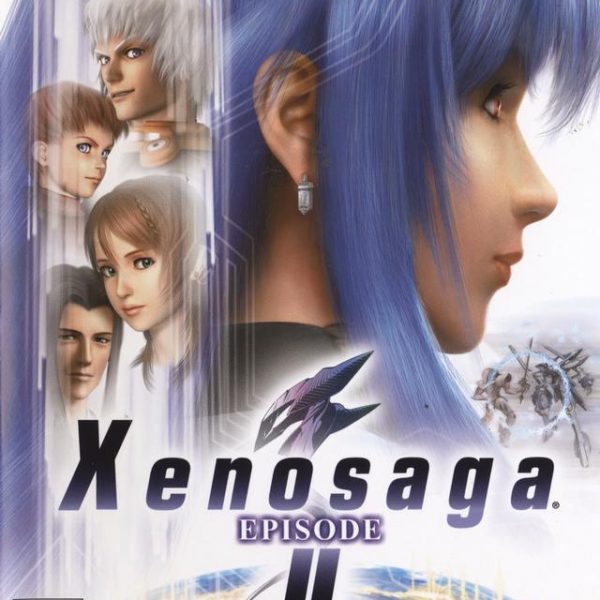 Author’s Note: This review was originally published on April 9th, 2005.

Xenosaga Episode I was an amazing game. It had some kick ass females, fun battles, and one of the coolest story lines ever. Two or so years after the first game’s release, we get hit with the second game. It was not worth the wait and nowhere near as good as the first game. While I was trying to do everything in my power to pro-long the first game, I was rushing through the second game because it wasn’t cutting it for me.

The story picks up directly where the first game left off. But first, we are treated to the events that happened during the Miltian Conflict fourteen years ago. Canaan, a Realian unit is given a mission on Miltia. chaos is sent to help him out with it. As they travel through the ravaged planet, they encounter officer Jin Uzuki. Together they face off against commander Margulis. After a heated battle, we fast forward to Shion and the crew. They head to Second Miltia after destroying Proto Merkabah. They reach the planet and everyone goes their separate ways. Shion goes to Vector to get work done on KOS-MOS. Ziggy, MOMO, and Jr. head off to get MOMO’s Y-data analyzed. chaos, that crazy mystery, decides to go with the latter group. While Jr. and the gang are heading down the highway, two mysterious E.S. units (the term for the giant robots) under the command of U-TIC’s Pellegri launch an attack against the team. What is U-TIC planning? Also, how do the events 14 years ago on Miltia involve Shion and her friends?

The answers to the questions above do indeed get answered, but by the time this short game ends you’ll be left with even more questions. The story is still good and deep (that sounds kind of raunchy) but it lasts too short for it’s own good. The story heavily focuses on Jr.’s past. While it’s really cool to see what happened exactly with him and Albedo, the fact that there was very little development for the rest of the cast really makes me mad. In fact, KOS-MOS, my favorite character, has a very minimal role in this game! I guess that leaves room for more development on her in the later games but still, I want more information on my sexy android! Other than these complaints, the story is done very well. There are still a few religious references here and there, but not as many as the first one. I didn’t care too much.

What I did care about, however, was the game play. Hmm…where to begin. Well, when you are not fighting you can usually find yourself walking around the towns chatting with NPC’s, or completing the GS campaign missions. This major side quest grants you items, skills, and double attacks. There are no shops in this game, thus no equipment. While the E.S. units have equipment, you still can’t buy things for them. For customization, Xenosaga II has the skill/ether system. In battle you’ll get Class Points and Skill Points (CP and SP). You use these to get new skills. These are used for healing, attacking, stat boosting or destroying, and you can also learn some skills that upgrade your characters parameters. There are literally a ton of skills to learn. Learning all of them will take you a very long time. The question is, however, will you want to?

If you said yes, then you will have to battle non-stop to get enough skill points do to so. Too bad the battle system is lame. Well, not lame at first. Hell, I had a great time with it at first. Afterwards, however, not so much. In this game, enemies have zones. To do any significant damage you have to break their zone, knock him on the ground or into the air, boost a second character, and then lay on the damage. There was potential for the system to be fast-paced and exciting but it was wasted. The reason is because of the fact that you have to stock. Stocking gives you an extra attack which you use to add on the damage and break a zone. Since you have to constantly stock, heal lost HP, boost, and stock some more regular encounters take forever. Boss battles take long, but they should because that’s how it goes in the RPG world. What’s worse with the regular encounters is that you often times get caught in a pincer attack and get damaged twice as much. You can switch characters on the fly, which is nice, but it doesn’t make up for the annoying zone break and stock system. Battles in an RPG are NOT supposed to take this long. The E.S. battles have been upgraded, but not by much. They are very redundant. You have to again build up stock to unleash powerful skills. You can get stock by wasting a turn or attacking. So basically, each battle is in an E.S. goes like this: you attack, enemy attacks, you stock, enemy attacks, you unleash a skill, enemy dies. That’s all there is to it. There is no strategy, no nothing. I miss the battle system from the first game. Sure it got redundant, but at least it was short.

The characters got a new, mature look accompanied with some new clothes. Other than the fact that KOS-MOS is not attractive anymore, the game’s visuals are stunning. Lush backgrounds in the environments, highly detailed cities, and some of the most creative monsters I’ve ever seen. The character models look nice, but they lack the emotion they portrayed from the first game. While the cute anime faces weren’t fitting for such a mature theme in the first episode, they at least were life-like with realistic expressions and body language. The characters in Episode II are just so…unenthusiastic. Still, the graphics over-all were done very well.

The music from the first game was an orchestrated masterpiece. The music in Xenosaga II is just a techno jazz fest. Sure, we finally have background music wherever we go, but I’d rather have no music than these quirky tunes I heard. Even the battle music isn’t exciting like it was in the first game. At least the sound remained un-changed. The VA’s did a very nice job giving the characters a bit more life. Most of the voices are from the first game. But AGAIN, KOS-MOS has been changed! Argh. Leave my girl alone! KOS-MOS doesn’t sound as hip as she did in the first game. Now she sounds like a robot.

Once all is said and done, will you want to come back for more? I see no reason to go back through this game; none at all. Once you complete the game you are granted access to some more GS missions and another Erde Kaiser mission. However, since they don’t have anything to do with the story, there really is no point in dealing with them.

I bought this game for a cheap price, but it can be easily completed in a rental period. Just be sure to level up a bit so the future encounters aren’t such a pain in the neck. Don’t get me wrong, I enjoyed some parts of this game but the fact that SO much was left un-said and SO much was changed, it just didn’t settle well with me. All I can say is that Xenosaga Episode III better be worth my money. If you are a Xenosaga fan, then you should give this game a go, but just be aware that it’s not as good as the first one.