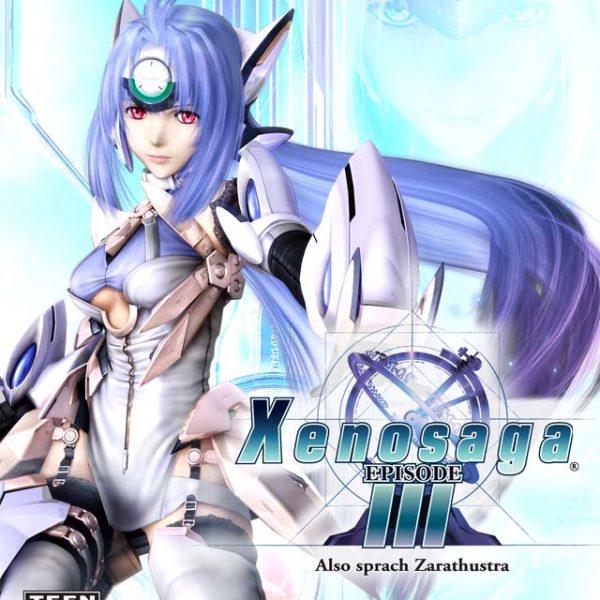 Author’s Note: This review was originally published on March 12th, 2007. Like other reviews around the time, it features “witty” taglines that separate each section.

What a ride it has been for the Xenosaga series. It’s path followed that of a roller coaster, in that the first was great, the second was a flop, and the third (and final) title was great. Xenosaga Episode III: Also Sprach Zarathustra is here and fans of the series should totally check this game out.

KOS-MOS, it’s story time!
Xenosaga Episode III: Also Sprach Zarathustra picks up where the last game finished. Shion has quit her job at Vector due to her father’s involvement with the company causing the Gnosis to arrive, and we join her on a high speed ES chase through virtual reality. Shion, Miyuki, and Canaan are now part of the group called Scientia, an underground, anti-UMN organization that is lead by a woman named Doctus. What begins as Shion’s quest for knowledge becomes an adventure that no one will ever forget.

Finally, we get to see who is who and what is what in this complex series. For those of you who were unable to play the first two games, there is a summary of them on the start screen, allowing you to be brought up to speed. One thing I really liked about this game were the characters. While Shion is usually labeled as a central, main character, the entire cast can be considered the main character, and develop over time as such. The blue eyed KOS-MOS, Ziggy’s past, the men behind the Testament masks, Shion and Jin’s life on Miltia, and so much more get revealed to you once the game is over. And yes, there are plenty of religious references. The driving force of the Xenosaga games is the story, hands down.

KOS-MOS, you sure are pretty…
The graphics have been upgraded from the second installment, thankfully. While they still have a semi-adult look to them, there is still that hint of anime charm in all of the characters. This really shows in the cinema scenes, which were done amazingly. Unfortunately, there are not enough of these. Instead of telling the story through animated cut-scenes, you get bland and boring conversation boxes. While the character portraits portray the mood, I still think that there needed to be more of the quality cut-scenes. Luckily, there is a movie player that allows you to watch your favorite movies as much as you want. The graphics, both in and outside of battle, were improved, but I think there should have been some more movies.

KOS-MOS, activate the Hilbert Effect!
Since I just mentioned battles, I suppose that it is time to mention the aspect of the saga that received the most improvement. That’s right, the battles. There are two types of battles, ground and ES. Both of them are fun. The more common type is the ground battle, in which you have a three person party fight against an enemy party. As usual, there are three types of enemies: biological, Gnosis, and mecha. The players on the battle field go back and forth exchanging blows. A new feature is the Break Gauge. Everyone has a bar underneath their HP meter. When that gauge is full, that person is stunned and all hits to that person are critical. This is great to use in boss fights, but be careful because enemies can do the same to you. All of your characters have a plethora of skills to learn, and by the end of the game, you’ll have a team of unstoppable warriors if you train them properly. Ether skills are finally useful, and each character learns three special attacks that grant bonuses to your experience points after you kill a foe with them, and you are able to change your characters on the fly. These were done very well.

The ES battles are much faster than the previous games. You select a series of attacks, and with every successful attack, a meter gets built up. When they reach the maximum, you can unleash devastating Anima Awakenings. Also, your ES will be able to execute more attacks. These are a simpler type of battle, but in the end, they are fun. Nothing is cooler than seeing a giant mech lay waste to a series of enemies with laser beams and giant sword strikes.

Overall, the battles were done well. At times, the enemies can be a bit powerful, and the boss fights, especially in the ES, can take up to 40 minutes because there is no strategy required other than lay down as much damage as possible and recover when you are running out of HP.

KOS-MOS, how about a walk around town?
There is plenty of exploration to be done in this game, be it in a town or a dungeon. You are able to return to either of the two with the UMN Plate, which was originally in episode one. There are plenty of treasures and secrets to find, as well as NPCs that have some good information. The Segment Address File is back, as is a brand new Database full of all the Xenosaga terms. Finally, you can find bathing suits for each of your team members.

Episode III also has the mini-game called HaKox. This is a puzzle game in which your characters must overcome obstacles and reach a goal. It’s fun, and later down the road, it’s very challenging. Doing this unlocks more items for you. There is always something to do in this game, so when you need a break from the story, you know that you can find something else to do.

KOS-MOS, sing your song!
There is always something to listen to as well in this game. Yeah, that was a bad transition, but it’s a weekend, I don’t need to think properly. Anyways, the music in this game was improved greatly. There is still a bit of that techno-jazz that was basically everywhere in episode two, but the majority of the tracks are more orchestrated, giving them a serious tone.

The sound in this game is excellent. The voice acting was done superbly, even for the characters who have very little screen time. For once, none of the voice actors got on my nerves. Even MOMO’s little girl persona was done flawlessly.

KOS-MOS, how about another round?
Innuendos aside, this is a game that lacks replay value. The game took me about 50 hours to complete, and that does include side quests and level building. I know that I will go back for more, but not until much later down the road. Once you know the ins and outs of all the characters, the surprise factor about the story line basically diminishes.

KOS-MOS, it’s been fun, but now we’re done.
If you couldn’t tell, KOS-MOS was my absolute favorite character in this entire saga. Despite her poor makeover in episode two, things changed for the better in the third installment of Xenosaga. I am upset that it didn’t become the original six part series like people wished, but episode three got the job done when it comes to telling a great story. For those who disliked episode two, you have nothing to fear about playing episode three. Furthermore, if you enjoy the Xenosaga series as a whole, playing part three will wrap things up in a way only Monolith Soft could handle. The game has a few flaws with the battles and the music, but in the end, true RPG players and Xenosaga fans alike will get over these matters. Xenosaga Episode III: Also Sprach Zarathustra is a great game, bottom line. KOS-MOS, I look forward to our next encounter!