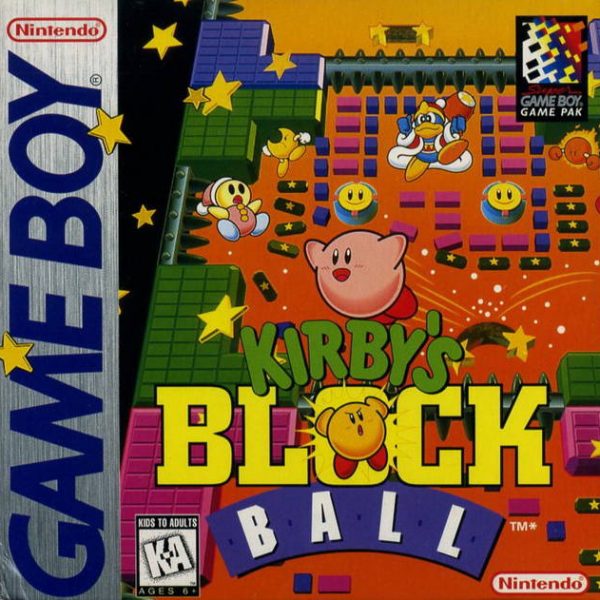 I sometimes have to remind myself how spoiled we are with modern portable consoles like the Vita and Nintendo 3DS. Their ability to display gorgeous visuals, play great music and provide stuff to do outside of gaming show just how far they have come. But, their most important feature is that you don’t have to worry about your AA batteries running out of juice. I recently destroyed some batteries upon completing a game featuring my favorite Nintendo mascot: Kirby. Kirby’s Block Ball is a Breakout clone that has addictive game play and catchy music. While not a long game on its own, the fun of replaying stages to earn a higher score might cause you to seek out extra batteries. It may not be a traditional Kirby title, but it’s hard for me to be mad at HAL and Nintendo for sticking Kirby in this brick and block busting bash.

Just like Kirby’s Pinball Land, Kirby’s Block Ball doesn’t have a story. That said, there is a bit more structure and cohesion to the setup of Block Ball. There are 11 worlds to visit and each one has up to five stages. Like Breakout, the goal of Block Ball is to clear the stage of various bricks while going for as many points as possible. You control the paddles on the four sides of the screen in an attempt to continuously rebound Kirby towards bricks that need to be destroyed and to prevent him from hitting spikes. Alongside the blocks, there are other objects you can hit to earn additional points. These include Star Blocks, enemies and food. A Star Circle found in most of the stages will start a bonus game. Upon starting the bonus game, all of the blocks will turn into blobs and it’s your goal to clear them before the time runs out. Doing so will net you even more points. At the end of each level is a boss battle. The stage before the boss battle tasks you with earning as many stars as possible. The stars you earn will cover the spikes in the boss arena. Boss battles aren’t challenging, but they provide a fun way to clear a world.

Obviously, anyone that has played Breakout or any of its variations will come into Block Ball with an idea of what to expect. However, there are some nifty features that keep things fresh. The most noteworthy is Kirby’s copy ability. Hitting certain enemies will let him gain a classic copy ability. The four abilities are spark, stone, needle and fireball. Spark lets Kirby pass through nearly all types of blocks in the direction he’s going. Stone will cause Kirby to plummet towards the bottom, taking out nearly anything in his path. The same principle applies to fireball, except he moves upwards. Needle is my personal favorite. Not only is it useful for setting Kirby back on the paddle, but it lets him rack of the most points when used properly. Another important feature is that a well-timed press of the A button when Kirby lands on the paddle will propel him and increase his size for a few seconds. This is the only way to break a certain type of block. Should Kirby miss the paddle while in this state, you won’t lose a life. Another feature is that there are a variety of bonus games to play by uncovering hidden Warp Stars. These include a twist on the classic Air Hockey and the fast paced Star Catcher. The most important feature worth mentioning is the Border Line number revealed at the start of each level. In Kirby’s Block Ball, each level has a certain level of points you need to earn. While you can finish a stage without earning this amount, doing so will lock you out of the final level. Luckily, you can retry each level as often as you like in order to clear all Border Lines.

Kirby’s Block Ball is easy to pick up and play. For an original Game Boy title, it’s also easy on the eyes. While the levels aren’t as varied as you would expect, watching Kirby fly from an enemy to a block to a power up and then to a bonus item never gets old, especially as you watch your score rack up with points. The music is extremely catchy. Each level has its own theme, and there are some toe-tapping boss and bonus tunes that can easily stick in your head.

Similar to Kirby’s Pinball Land, there isn’t much to say about Kirby’s Block Ball. It’s another title that features my favorite pink puff, but it doesn’t have you saving Dream Land or Pop Star or going on some adorable adventure. Finishing the game with all of the Border Lines cleared will only take a few hours, but going back to it again and again to achieve the highest score possible makes it perfect for quick playing sessions. It’s a fun puzzle game, but still a puzzle game that copied the classic Breakout formula. I recommend it to fans of Breakout and to fans of Kirby, but if you aren’t a fan of neither of those two things then you’re better off looking for something else to play on the Game Boy.

Overall, 7/10: Kirby’s Block Ball is simple, addictive and charming. It’s catered towards a certain crowd, but that crowd will eat it up.