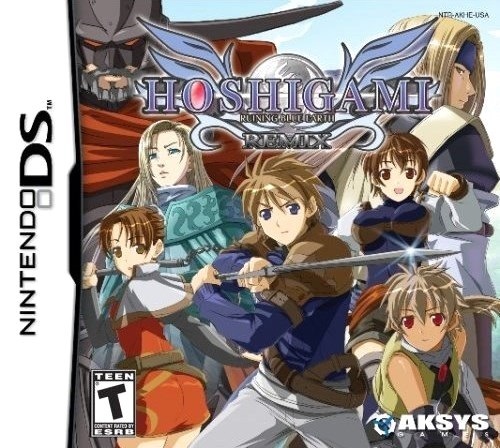 Author’s Note: This review was originally published on October 26th, 2007. Like other reviews around the time, the different sections were separated by “witty” taglines. This review was hard to write because Hoshigami is one of those games that never got its potential fully realized.

My first review was for the Playstation SRPG, Hoshigami: Ruining Blue Earth. In that review, I often compared Hoshigami to the critically acclaimed Final Fantasy Tactics. I did not care for Hoshigami, but I know that comparing it to FFT was unfair, especially considering the potential Hoshigami had. Fast-forward five years to now. No longer am I an FFT fan-boy, nor an overly opinionated gamer. I know what I like, such as the idea of a potentially awesome SRPG getting remixed and remastered into a more playable version. Hoshigami was supposed to get that for a re-release on the Nintendo DS. However, it got nothing of the sort.

Same Old Story.
The game puts you into the role of the brash mercenary, Fazz. Normally, Fazz and his best friend Leimrey work free-lance. One day the two warriors get a job from Nightweld, a country that has been at war for ages with Valaim. The Valaimian army has been causing Nightweld much strife, and it turns out that the Valaimians destroy Fazz’s village. What Fazz does not know is that he is connected to a greater plot revolving around an ancient story about the origins of his world. Fazz must overcome his identity, as well as the rival army.

Fazz’s story is interesting. While he may be a cookie-cutter hero in some regards, he has an endearing personality that makes him likable. The same can be said about a few of his friends. A feature that the game raves about is the addition of a new character. Actually, a female story character has replaced a male story character from the PS1 version. What gets me is that they act the same way. While this was not a problem, I would have liked to see a new character that was not based off an old one.

The story that develops around Fazz, has been seen one too many times. Granted, the story was from five years ago. There are multiple branches of the story, and some choices influence your next destination. What makes the story boring is the lack of interesting conversation. Most NPCs are dry, and their method of important information giving lacks that edge-of-your-seat appeal. For a remake, Hoshigami requires better editing in terms of the script.

One New Look, One Million Old Faces.
In the Playstation version of Hoshigami, the opening movie was nothing exciting. In the DS version, you are treated to a fun, anime movie. Other than that, the remake looks the same as the original. Both screens were used, but not to their fullest potential. This was not necessarily a bad thing, but the DS could have been pushed further. The 2D sprites with the isometric view give Hoshigami a classic look. However, things like spell effects, character portraits and battlefields could have been reworked for a more current look. Graphically, Hoshigami is not bad; its just uninspiring.

The Sound of the Dead.
One thing that I enjoyed about Hoshigami was the sound selection. When a person perishes, they let out a wail that sounds similar to that of a wild animal. Needless to say, it cracks me up. That aside, everything else sounds as it would in most video games. Swords clank, water splashes, and wind howls. The music in Hoshigami was never anything exciting, and the DS version is no different. The selection of songs, much like the visuals, were uninspiring.

Re-make It or Break It!
Up to this point, the original and the remade Hoshigami were similar for the most part. My original problem with Hoshigami was in the game play. The battles were so bad, you had little choice but to level-grind until your fingers bled, or play the game solo in a customization lacking quest. Both options were lame, and when coupled with the lack of necessary SRPG mechanics (saving after multiple part battles, revive spells, and a user-friendly magic system) the game was unplayable for most people. Aksyss Games claimed to have fixed the problem with the original, thus making the DS version playable to everyone. Well…

Hoshigami uses the Ready for Action Points system (RAP). On the screen you’ll see a bar with face icons. The order of the icons shows the order of the turns. This was the one aspect I liked about the battles. Instead of having all of your friends go for a turn followed by the enemy turn, you had to carefully plan how to use the RAP Gauge to the fullest potential. For instance, you could move a few squares, attack, and then use an item if you plan accordingly. The RAP system truly makes you use your strategy skills. Proper use of the RAP system seriously helps in making the game more playable. While the learning curve is steep, after a few battles most people will easily understand how to get the most out of their turns.

Starting a new game looks promising if you have played the first version. The game gives you the option of choosing your difficulty level. Those looking for a challenge (aka, the original version) can play on Hard mode. Those looking for something a bit more forgiving have the Easy and Normal modes. Regardless of the mode, however, the game play is as lack-luster and tedious as it was before (save for the RAP system). Your typical battle consists of your six or seven party members facing off against at least double that number of enemies. Usually, your foes have a terrain advantage. This grants them access to pelt you from above with arrows, boomerangs, and magic. When you actually are able to fight back, you’ll quickly learn that melee weapons are downright useless. The only way to successfully overcome any foe in this game is to rely on magic. At the start of the game, you can get by without solely relying on magic. However, in the later chapters, it is the only way to survive. Not only does this come as a downer due to lack of customization, it also makes you have to deal with the Coinfeigm system.

In Hoshigami, you use Coinfeigms (magic coins) to cast your spells. Each coin can be powered up with seals. Sounds fun, right? Wrong. Upgrading your spells so they can cause the necessary amount of damage is time consuming, monotonous, and banal. You will spend hours on end combining seals and coins. After a certain point, a once flawless coin will become useless, and you’ll have to make a new coin. Seeing as you need to use magic to emerge successful, you will have to make an endless amount of coins for your entire party. Even the most die-hard SRPG fans will lose their patience with this system, especially when an engraved seal results in a product that was not expected (i.e. you lose your coin and get something worse).

Besides magic, your characters can do a variety of other actions. When you chose to attack, you will have to time your button press to get a critical hit. Items can be used, and some items can be found on the field. Every action grants your characters experience points and deity points. DP are used to learn skills. When their RAP gauge runs out, you can have them defend or wait. By waiting, you can set up an Attack Session. With the proper timing and planning, you can decimate a foe with a powerful combination attack using all of your party members. Unfortuantely, these become hard to set up near the end of the game. The reward for doing a session is nice, but not worth the effort.

When Fazz falls, it’s game over. When a member of your team falls and you fail to revive him/her, you never see him/her again (except for Easy mode). One battle can take as long as an hour, making the game drag on and on. I was hoping, praying and everything inbetween that all of the flaws were fixed for the remixed Hoshigami. I was let down, and the game is just as redundant and flawed as before.

Finally, Victory…
When you are not battling, there are a few things you can do on the world map. Besides going to a Tower of Trials to test your strength, there is shopping to do in towns. Money is rarely a problem, so you can always buy the best equipment. The coin shops are where you spend most of your time. In a temple, you can use your deity level ups to learn new skills. Each deity represents one of the elements in the game: wind, water, lightning, force, fire and earth. Obviously, each deity has their own set of skills that your team can learn. This sounds fun, however it gets ruined by the fact that only skills helping with magic are worth learning. Other than those diversions, there is nothing else to do on the map except move to your next battle. Joy.

It Has Been A Long Time, Lenn-er…Fazz…
The game has multiple endings, but getting one of those endings will take an undesirable 50 hours. Obtaining the true ending will take preparation and determination. When it comes to getting the most of my video games, I usually have the preparation and determination. Hoshigami, however, made me lose both of those attributes. The game is boring, uninspiring, flawed, and tedious. Making magic so powerful was a bad move. What gets me is that the makers and re-makers had five years to improve on this SRPG. Five years is a long time. Instead of turning stone into gold, they turned stone into sand. What gives? I know that the DS has been hurting for RPGs for quite some now, but Hoshigami will do nothing to satisfy an RPG urge. The idea was promising, but I advise gamers to look elsewhere for an SRPG. After over five years and 130 reviews, Hoshigami is as lame now as it was then.