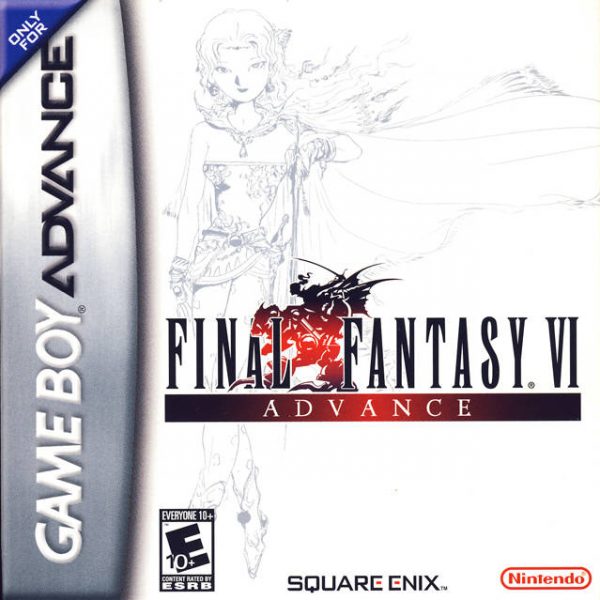 While playing Theaterrhythm, I couldn’t help but feel a sense of nostalgia that made me want to play and re-play certain Final Fantasy titles from start to finish. On a whim, I decided that my first should be Final Fantasy VI for the GBA. Now, time for a brief history lesson with yours truly as the central character. I played the SNES version known here as Final Fantasy III. I nearly finished it, but for some reason never found the time to deliver that final blow to Kefka. So, I have some knowledge on the ins and outs of Terra Branford and her friends. Still, my past experience with the game didn’t inhibit any fun while going through the World of Balance and the World of Ruin a second time. Furthermore, watching the ending and the satisfying conclusion was a real treat. I guess what I’m trying to say is that FFVI for the Game Boy Advance is a great title, no matter how familiar or unfamiliar you are with it.

Unlike previous entries, Final Fantasy VI has nothing to do with four elemental crystals and the lore behind them. Instead, it takes place years after The War of the Magi, a time when magic was used as a weapon by beings known as Espers. After the war, industry and technology took over. Years have gone by, and folks seem to have forgotten about magic. The Espers seem to have vanished. Now, in the slummy town of Narshe, word has gotten out that an Esper has been spotted. Emperor Ghestal has sent a young woman with no memory to investigate. What this jerk emperor doesn’t know is that this woman, Terra, has magic running through her body. It’s hard to say what could happen if she comes into contact with an Esper. A monumental adventure is about to begin with the world’s fate hanging in the balance. Terra’s adventure is one riddled with danger, so it’s a good thing she meets nearly 15 characters to help her in recovering her memory and putting a stop to the empire’s evil plans. Such characters include Edgar Roni Figaro, a king, playboy, and a brilliant inventor. There is also Strago Magus, an elderly man who wants to show some whippersnappers his blue magic. My favorite character is Setzer Gambini, an Alucard-type looking man who gave society the finger and decided to travel the world on his airship. Every character is unique in some way, and their personalities shine with the update script. The large cast comes together to stop one of the most well-known villains in video game history: Kefka. Ah, Kefka. Where would Final Fantasy VI be without him, his cruelty, his face, and his laugh? It’s hard to say, but alongside Terra and her crew, Kefka adds to the excellent cast and creates a memorable story.

The neat thing about the cast and crew of Final Fantasy VI is that their personalities show their differences in battle. FFVI is a standard, ATB, turn-based type of system that has been in use since FFIV. You can attack, cast magic after a certain point in the story, use items, defend and switch from the back and front rows. Each character has a command unique only to them that sets them apart from each other. Some are basic, such as Locke Cole’s ability to steal items from enemies or Strago’s ability to learn and use blue magic. Other characters have some much more unique abilities. Sabin Rene Figaro has the Blitz command. By inputting commands that you’ve seen in various fighting games, Sabin will perform special attacks with powerful results. Word to the fun loving folks reading this review: use the suplex move on the train. Fans of the game know what I’m talking about. Three characters are unlike the rest of the cast. Gau has the ability to imitate monsters with the Rage command. Umaro is a giant beast whom you have no control over, but certain accessories make him not to be messed with. Finally, Gogo is a mime who can use any command you wish. It all adds up to exciting options in the endless battles ahead. The best part of the battles is watching your characters grow as they gain levels, learn magic and get multiple options in disposing the hundreds of monsters out to kill you. A few bad points about the battles are worth mentioning. Battles can be a bit too abundant in certain areas, which can get stressful when you’re trying to save. In most RPGs, the boss battles are the ones that you need to worry about. Some may be upset to know that Final Fantasy VI is an easy game, especially when it comes to bosses. Heck, even some of the optional bosses don’t pose much of a threat due to the way your characters grow and progress. Still, battles rarely last more than a minute and watching your team of heroes destroy baddies with magic, special skills and giant weapons is nothing short of classic Final Fantasy fun.

I’ve mentioned magic a few times already, so I think it’s important to mention that magic plays a huge role not only in the story, but in character customization as well. Sure, characters can be equipped with weapons, armor and some unique accessories. However, Espers are where the real fun lies. On your journey, you’ll find Espers that get turned into shards of their formal selves called Magicite. By equipping these, your characters will use the AP earned from battle to learn various magic spells. Obviously, the more useful spells will take longer to learn. Once the spell is learned, though, it’s learned forever. This gives you tons of options to create your perfect party. Do you want to make one character a “white mage” type and another character a “support mage” type? Or, do you want to have all of your characters learn all the spells? Whatever the choice you make, you have endless options as you scour the world for a variety of unique Espers. Oh, and Espers –CAN- be summoned in battle for some impressive looking attacks.

Which leads me to the graphics department. Damn, I love how this game looks. The 2D sprites are expressive and vivid, and outlined by sharp, black lines. Really, I have nothing bad to say about the graphics because all of the basics are covered: great looking sprites, great looking world, great looking spells, and great looking monsters. The only thing that’s not great is the character art. Look, I can’t stand Amano’s style. I think it’s ugly and bizarre. That aside, FFVI looks wonderful. It also sounds wonderful. I’ll start by saying The Decisive Battle is the best battle anthem from any Final Fantasy. Now that that’s out of the way, the rest of the music from Uematsu does as you expect: deliver a classic and fun experience. Is it worth hunting down the soundtrack? Well, by this point in the lifetime of FFVI, you can probably get by with just a few downloads for your favorites.

After an epic final boss, the game ends and grants you access to some bonus dungeons exclusive to the GBA. I passed on these, but those who can’t get enough FFVI will likely take advantage of new treasures and Espers. A typical file will last anywhere from 20 to 40 hours, depending on how much you want to do and see. In the end, I’m glad I finally finished this classic title. The best thing about it is that it stood the test of time exceptionally well and not many old-school RPGs can do that. Fans of the series or newcomers to the RPG genre should hunt down this gem of a game and experience one of the best Final Fantasy titles out there.