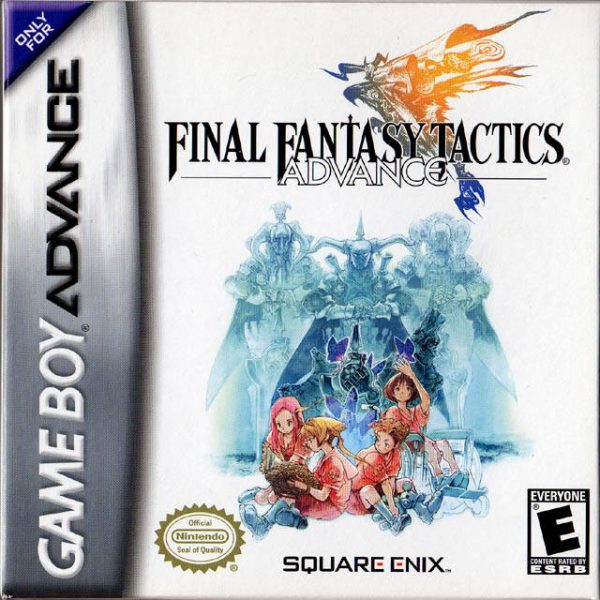 Author’s Note: This review was originally published on September 14th, 2003. And, my goodness, does it ever show. This was not one of my proudest moments. I remember seeing nothing but praise for this game and felt inclined to let the world know how I truly felt.

Ok, like most people I was ecstatic when I learned that the GBA was having a Square FF Tactics game. But…I was afraid that there would be too much hype. And there was. Seriously folks, FFTA is not that great! If it didn’t have the Final Fantasy, Square Enix logo, or anything else…I’m CONFIDENT that it wouldn’t get as much credit as it does now. Anyway…

Story: 7/10
Marche, Mewt, and Ritz are three friends who are constantly picked on at school. After a snow ball fight, they go back to Marche’s house and Mewt reveals a mysterious book. Within the book are pages that none can read, full of pictures of odd creatures and symbols. The friends leave, and Marche goes to sleep. He wakes up…in the world of Ivalice. He then befriends a black mage moogle, and hopes to figure out how to go back home. The story is NOTHING like the first FFT. This one doesn’t involve love, betrayal, war, zodiac symbols, or anything like that which made FFT so confusing and amazing. This story in FFTA is good, but more like a little kids tale of finding his way home.

Gameplay: 8/10
A lot of the things are similar to the first FFT, but a lot of the things are different. FFTA’s field gameplay is a mixture of good and bad. Once again, there are many jobs to choose from. As you level up, you get more advanced jobs. There are new jobs, not in the first FFT. Also, certain races of species have specific jobs; quite cool. Abilities are learned by equipping new weapons and armor. There are no Job Points, something I liked. Instead you get AP. Usually, you’ll earn about 50 AP at the end of each battle. Learning new abilities really can take a long time. Also, buying new equipment is a real pain because there is no option for seeing your best equipment. Your items are also get disorganized at times; quite annoying. Your world map is similar to all strategy games in that your character moves from spot to spot. One fun thing is that you can create your world by placing each location wherever you please. And if you get a certain order right, you can find hidden treasure. I really enjoy experimenting with new locations. Overall, if the organization of how to set up your characters was tweaked a bit, it would make playing the game a lot smoother.

Battles: 7/10
You start battles by either encountering other clans, or taking jobs from the pub. Actually, the story revolves around the jobs from the pub. You just have to pick the one that advances the story. That’s something I REALLY don’t like. But anyway, your battles are fought on a grid…you choose six characters…the battle begins. But, before you start the battles, you have to check the laws. That’s right…the laws. If I was in a war…I’d break the laws to ensure my survival, but whatever. Anyway, the laws can be anything from not using items, not using ice spells, or even not physically fighting at all. They really suck, especially if you forget to check them. You can’t go back during mid-battle and see the laws. If you break said laws, you’ll get a yellow card. If you break the law again, you get a red card. A red card means that you go to jail. If you go to jail, you have to pay a HUGE fine to get the person out. You can nullify some laws by getting Law Cards, but that’s way late in the game because I haven’t gotten one yet. Anyway, when you fight you have your basic commands. You can move then choose a way to damage your foes. There are many abilities to choose from, even with the beginning classes. Whenever you kill a foe, you get a JP (Judge Point). These are used to create combos which are always fun in an RPG. Battles take a lot longer than the first game’s. This is mainly because your characters are constantly missing with their attacks. Did I mention that magic can miss too? Yes, indeed it can. Some good things about the battles are your rewards. You always get a lot of gil and fun items for victory. Overall, the battles lose a lot of their spark from the first FFT due to the length and the laws. I’m sure once you get far enough, however, things will run a bit smoother.

Characters: 10/10
I really loved seeing moogles again in this game. Montblanc, the main moogle is very funny. Marche and his friends are nice characters too. I really am excited to see how they mature in this game.

Graphics: 10/10
The graphics are probably the best part of the game. The backgrounds are very nicely detailed, full of objects and great scenery. The spells don’t look that great, but they still get the job done. The character sprites are very impressive (especially considering how many jobs there are). Each one is detailed, and has his/her own portrait. The character art does need a little tweaking (guys look like girls) but it’s still fine. The graphics are great.

Music and Sound: 9/10
For a GBA, the music is top notch. Finally, we don’t need to keep the volume down. While the number of tracks is lacking a little, they still are pleasing to the ears. I’m not saying to go out and buy the OST, but the tunes are still good.

The sounds are…corny, especially when someone dies. It’s actually quite amusing. But, the fun ”kupo” noise is back and still sounds great.

Replay Value: 6/10
I don’t know if there are multiple endings. Still, replaying this game is something that I won’t do for a long time. I know that there are tons of jobs, abilities, and missions…but it can actually be quite overwhelming at times. In the first FFT, I always find myself coming back for more. I’m not so sure that this is going to happen with FFTA.

Difficulty: Medium
This game does have slight learning curve, similar to the first FFT. But, you’ll get used to it after a couple of hours of game play. The battles are long. They’re not necessarily hard or anything, they just last a long time.

Buy or Rent: Buy
Buy this game, but only after the price drops a little. This is not worth losing 40 some dollars or however much a new GBA game costs. Save that money for something else, then get FFTA when it costs less.

People are giving this game way too much credit. It IS a good game, but not as great as people say it is. If you liked the first FFT, you’ll sort of like the GBA game. Strategy/RPG players may also find this game to sort of charming, but it is nothing special when you get right down to it.