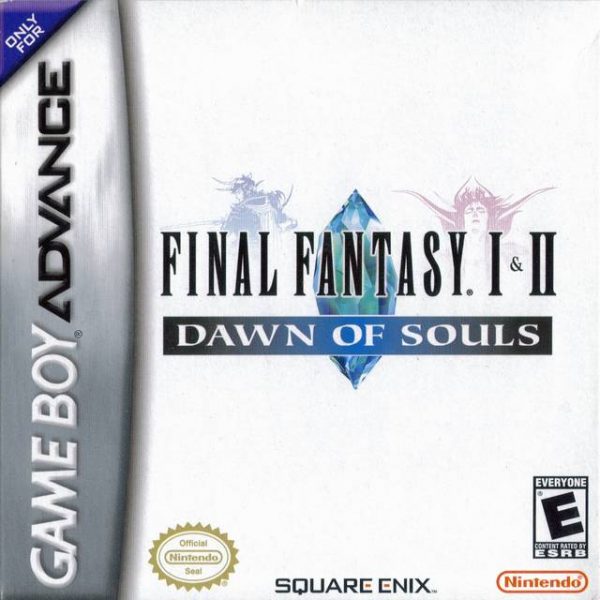 Author’s Note: This review was originally published on January 3rd, 2005. Since then, I feel like Final Fantasy II doesn’t deserve the negativity it gets. I’d say that this is an “above average” collection.

If you missed out on Final Fantasy Origins like I did, then you’ll get another chance to play both games with Final Fantasy I & II: Dawn of Souls. The icing on the cake is that you can take it with you wherever you go. For me, the first FF was a blast. All the flaws from the NES version were erased, and the fact that you could save anywhere was quite a blessing. After I completed it, I was quite eager for FFII because I never played it. While not as fun as the first title, the interesting approach on “leveling up” made the game unique in its own right.

FFI Story: 6/10
The crystals of water, fire, wind, and earth have lost their power. The world is slowly going chaotic. That’s not good. Luckily, the four Warriors of Light have been summoned together to put an end to the catastrophe.

That’s really it. There are no twists or shocking moments in the story, unless you count the one in which you encounter the last boss. Still that’s not saying much. Then again, you have to keep in mind that this was one of the first true RPGs, so at the time the story was quite original.

FFII Story: 4/10
A war has broken out between two countries with the evil Emperor of Palemecia leading the fray, and four orphans have been caught in the middle of it. Guy, Leon, Firion, and Maria enjoyed a peaceful life until the war shattered their happiness. After an assault by the Emperor’s minions, the orphans were rescued by the queen of Altair and her rebellion group took them in. However, one of the orphans was nowhere to be found. The three friends decided to venture forth to find their friend and put a stop to the Emperor.

Going off of what I played, this story has much darker undertones than the first Final Fantasy. Unfortunately, the characters are a bit dull and watching them save the world isn’t as satisfying as can be.

FFI Game Play: 9/10
Good, old fashioned role-playing at it’s finest. You start the game by picking four classes. The choices are Warrior, Red Mage, Thief, Black Mage, White Mage, and Black Belt. Each class has a strength and weakness. I went with Warrior, Thief, Red Mage, and White Mage. After selecting your four classes, you are given your first task of saving the princess of Corneria. Your adventure takes you from location to location as you restore all of the crystals with their respective elements. You can buy items, weapons, armor and spells for your team in order to make this venture easier. Eventually, your team can get an upgrade in classes. It’s very basic, but it’s also very fun.

The battles are, surprisingly, just as fun. At the start of the battle you tell your characters what to do. You can attack, use magic, use an item, or run. Once all characters have been given a command, you watch the battle play out. You don’t have to worry about dealing with under leveled characters because your team levels up much more quickly than the original version. Also, money isn’t as big as an issue as it used to be. But don’t go thinking that you’ll have an easy time with this game. It can get tough, especially when your put against a party of 8 Cockatrices.

FFII Gameplay: 5/10
Most of the stuff from the first FF is back in terms of out-of-battle game play. You can buy your team items, armor, weapons, and magic. New to this game is that anyone can learn how to cast magic. Also, there is a bigger variety of weapons. The difference comes with there being story-driven characters instead of you selecting from four classes at the start of the game. Each character starts as a blank canvas with similar stats, and this is where the growth system comes into play. Instead of leveling up after obtaining experience, characters grow a bit differently after a battle.

The turn-based system is the same as the first FF in that you select your actions for your party members and watch the battle unfold. The twist comes with after a battle. If you have played any of the SaGa games, then you’ll know recognize this system. At the end of the battle, each character may get more HP, or get an increase in stamina, or advance in weapon level. This allows you to shape your characters as you see fit. It sounds easy enough, but it’s actually a real pain if you don’t abuse the system. There are certain ways to do this, and some may view this as lame, but progressing with the story at a normal rate will lead your party to certain doom due to the way enemies become stronger and your characters barely grow. Statistics only increase if you grind in a single battle. For instance, to get more HP, you need to lose A TON of HP. To get higher defense, you need to get attacked endlessly. On the other hand, it is relatively rewarding to perform well in this game considering how difficult it can get.

Graphics: 10/10
Nice work here. Both games have some very nice character sprites that have great animation. Spells look very cool, as do the backgrounds in which you fight. They have been given plenty of detail. The monsters look awesome. They are colorful and drawn with exceptional detail. Square never fails to please with graphics.

Music and Sound: 8/10
The music is the same from the NES versions, only much better quality. You may recognize some of the tracks from other Final Fantasy games. This comes as quite a nice surprise. The tracks do repeat themselves a lot, but it’s nothing too bad at all.

Replay Value: 6/10
You get two games in one package. If you were to play the games a second time, you can try new parties and different methods of building your stats. Still, once through the first game was enough for me. I should mention that FFI has the Soul of Chaos mini-quest, which is where you encounter old bosses and dungeons from various Final Fantasies. Soul of Rebirth in FFII lets you play an epilogue for the four heroes after you defeat the last boss.

Buy or Rent: Buy
Buy this collection because both games may take you a while. One rental won’t be enough. Not to mention you may tack on some more hours if you wish to get everything from Soul of Chaos and Soul of Rebirth. In the end, Dawn of Souls is a nice deal. You get two games for the price of one. Despite Final Fantasy II’s dubious spot in the FF history due to the growth system, any fan of the most popular RPG franchise of all time should give this collection a go if they haven’t tried the originals before or if they with to take a trip down memory lane with a few bonuses tossed in for good measure.