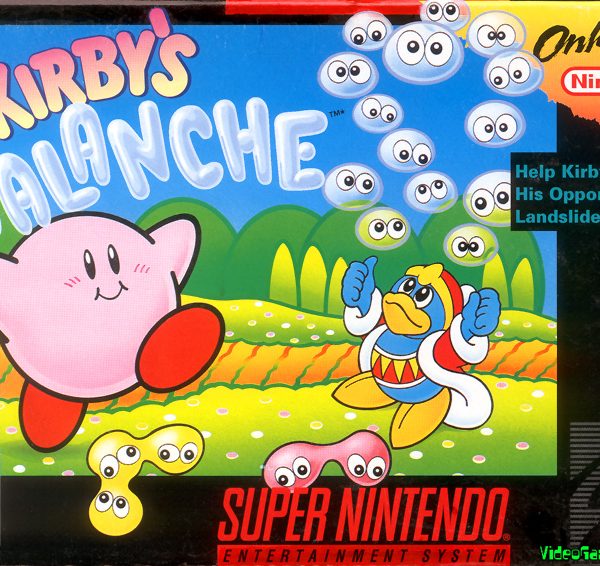 Kirby’s Avalanche is a puzzle game that is actually a westernized version of Super Puyo Puyo. I’ll be the first to admit that I’m terrible at puzzle games. Whether it’s something as simple as Tetris or something with a bit more pace like Lumines or Dr. Mario, I’m usually the first one to get to the game over screen. So, why did I punish myself with Kirby’s Avalanche? The answer is simple: Kirby. Indeed, my favorite video game mascot has found himself in the Puyo Puyo world but with a different name and a different setting. Fans of Kirby will probably be bummed that Kirby’s Avalanche isn’t a traditional Kirby title, nor is it a new puzzler. However, certain things about it might make it an enjoyable experience. Even if you aren’t a fan of this genre, some things about it make it worth a glance.

For instance, Kirby’s Avalanche is a bright and expressive looking game. Most of the time, you’ll be concentrating on the blobs on screen. If you take a chance to look away, you will see your opponent’s current mood, Kirby dancing in the middle of the screen, some bright borders and textures and vivid color palette. Despite the fast past nature of Kirby’s Avalanche, the graphics are easy on the eyes. On the other hand, the music could have used some more variety. Remixed tunes from Kirby’s Adventure and Kirby’s Dream Land were used for the majority of the stages. A lack of original music takes a bit of fun out of going from one stage to the next because you’ll end up hearing the same song. But, as a bonus, there are some voice clips thrown in.

Something else that’s interesting about Kirby’s Avalanche is that it has a story, complete with dialogue, cut scenes and character interaction. The residents of Dream Land are competing in a tournament in which they must race one another towards the Fountain of Dreams. If they encounter another competitor on the way, they will need to play a game of Avalanche. The last person to make it to the Fountain of Dreams and win the last game of Avalanche wins the tournament and a special trophy. The interesting thing about the story is that we get to see Kirby interact with Meta Knight, Whispy Woods, Waddle Dee and other characters. Kirby usually has nothing to say, but in Kirby’s Avalanche, he’s a sassy and snarky little pink puff that often times gets too big for his britches. In some ways, it’s entertaining to watch him talk smack to his opponents. Other times, it feels contrived.

But, the main draw to Kirby’s Avalanche and the feature that will ultimately determine whether or not you want to check it out is the game play. Kirby’s Avalanche is Puyo Puyo with a different set of characters. In Puyo Puyo, a pair of multicolored or same colored blobs will fall from the top of the screen to the bottom. When four of the same colored blobs connect, the blobs will disappear. As you make your blobs vanish, transparent blobs will fall on your opponent’s side. The only way to get rid of these is to make sure they are next to a set of blobs vanishing. The key to victory in Avalanche is to make large chains of your blobs disappear in the same turn in order to make a mountain of transparent blobs fall on your opponent’s screen. Like most puzzle games, things start off relatively simple. But, by the time you get to the third or fourth stage, you will need to think about your next move carefully to not only keep your screen clear, but to keep the pressure on your opponent. By the time you reach the final stages, things will really start to become difficult.This means that there is no inhaling an enemy and spitting it out. There are no copy abilities. There are no Maxim Tomatoes, Invincible Candy or food items. There is no floating, puff ball shooting, sliding or swimming. Hell, the only walking that Kirby does will happen during the game’s cut scenes. Obviously, this is the furthest thing from a traditional Kirby title. If you’re looking for something like Kirby’s Adventure, then you’ll want to avoid this title.

Finishing Kirby’s Avalanche is mostly dependent on skill and luck. If you’re good at puzzlers, then you can finish the game in under an hour. If you’re a novice like me, especially with the Puyo Puyo world, then you’ll have a longer road to victory. There are multiple difficulty levels and some customization options that you can check out, but Kirby’s Avalanche is lacking in replay value if you’re by yourself. If you have a friend, then you can participate in two player mode. Is Kirby’s Avalanche fun? Sure, it can be. I was just hoping for something that had more Kirby elements in it. Even something like Kirby’s Pinball Land feels more like a Kirby title than Avalanche. Therefore, it’s hard for me to recommend to Kirby fans and the reason why I rated it the way I did.

Overall, 5.5/10: Eh, not much to say here that hasn’t been said before about Puyo Puyo.