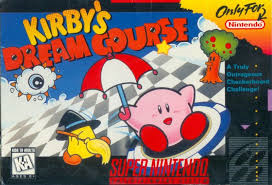 I hate golf. Seriously. I think it’s one of the stupidest “sports” of all time. I find it boring. I find the people that partake in it on a regular basis banal and snooty. The amount of stuff you have to buy just to participate in an afternoon of summer sun beating down on you while you wear baggy clothes and ridiculous hats lacks any sort of appeal. And to be truthful, I am not that fond of miniature golf (or putt-putt golf, depending on what part of the world you come from) either. Even when it was announced back in the middle of the 90s, I was not pleased about the concept of Kirby’s Dream Course. Just the thought of my favorite Nintendo mascot in an activity I do my best avoid made me want to pull out my hair. Years later, I decided to give the game a fair chance with no preconceived notions or biases about golf or any of its variations. After some struggling and frustration, Kirby’s Dream Course started to win me over. I feel like it’s a game that is good for playing for a few minutes at a time. It’s not my favorite Kirby game, nor does it change my thoughts on golf. But, it offers a nice distraction.

Surprisingly, Kirby’s Dream Course has a story. King DeDeDe is up to no good yet again. This time, he has stolen the stars from the skies of Dream Land. Kirby, everyone’s favorite hero, has decided to reclaim the stars from the king’s fuzzy mittens. In order to do this, he will go on an adventu—err…no, he will turn himself into a ball and get whacked by a magical putter across eight miniature golf courses. DeDeDe has some really messed up ways of challenging the pink hero. It should be noted that Kirby’s Dream Course was originally going to be entirely different. A concept for a miniature golf game for the Super Nintendo called Special Tee Shot was in development as a standalone title. At some point in production, the world of Kirby was thrown into the mix. The actual Special Tee Shot was only released in Japan for the Super Famicom’s peripheral Satellaview system. I digress. The point is Kirby has been tasked with retrieving stars by playing miniature golf.

Before teeing off, I think it’s important to mention that Kirby’s Dream Course is one of the better looking games for the Super Nintendo. The golf courses are viewed from an isometric perspective and feature multicolored, checkerboard patterns. In the background, you will see various environments that give each course some individuality. These include gingerbread houses, waterfalls, and even giant whales coming up for air. After you’ve finished admiring the backgrounds, you’ll see that the aspects of the game you control are just as easy on the eyes. Kirby and the obstacles in his way are crisp, colorful and fun to watch. The variety isn’t as noticeable as the actual courses, but they get the job done. The music features some new and some old tracks that fit the world of Kirby. Interestingly, the sound effects are more impressive than the music. The thwack of Kirby taking off and rebounding around the stages and initiating catchy chimes is satisfying from the first hole to the last hole.

The goal of Kirby’s Dream Course is obvious to anyone familiar with any form of golf: get Kirby into the hole. Once you do this, you move on to the next hole. There are eight holes in each of the game’s eight courses. But, there’s much more to the game than meets the eye. At the start of a hole, Kirby will be lying in wait for you to set his path, determine the power of the swing, and adjust the level of top-spin or back-spin. Once that’s all set up, you will execute the swing and watch Kirby fly. All of this needs to be taken into account not only because the physics in Kirby’s Dream Course are precise, but because every swing costs one fragment of energy. Energy is represented by Maxim Tomatoes. After you run out of energy, Kirby loses a life. Trying to “Happy Gilmore” Kirby is a sure-fire way to knock him out of bounds or hit an unbreakable obstacle. These actions will also cause Kirby to lose energy. So, how do you recover lost energy? One way is to have Kirby hit an enemy. As long as the enemy isn’t a Gordo or Kracko, the enemy will disappear and Kirby will earn a tomato. The last remaining enemy will turn into the hole. Reaching the hole is another way for Kirby to regain a tomato. It may sound simple, but Kirby’s Dream Course requires patience, accuracy, and careful planning. In some ways, Kirby’s Dream Course is more of a puzzle game than an actual miniature golf game. If you scan the current hole accordingly and hit the enemies in the right order, utilize the course’s layout and objects to your advantage, then you might score a hole in one. This will grant you an extra life.

Up to this point, there doesn’t seem to be much inclusion of the Kirby world aside from the titular hero playing the role of a golf ball. Luckily, the copy ability is back. Upon hitting certain enemies, Kirby will earn a special ability. Stone lets Kirby drop immediately downward. Needle lets Kirby stop sliding. Parasol will let Kirby slowly glide downward. Fireball will let Kirby move in a forward trajectory. The more useful abilities are Tornado and UFO because they let you control Kirby for a limited time. When used properly, they can be a real life saver. Once you finish a course, your score will be tallied. Depending on how well you perform, you might earn a bronze, silver or gold medal as a reward. With enough medals, you can unlock course variations.

Despite its initial difficulty (or maybe my lack of ability) Kirby’s Dream Course doesn’t take long to complete. All eight courses plus an entertaining “boss battle” can last about three hours. However, with a two-player mode and the chance to revisit courses for a better score, there is definitely some incentive to play after the game has been completed once. Similar to something like Kirby’s Avalanche or Kirby’s Block Ball, Kirby’s Dream Course is not a traditional Kirby game. While it has elements of the puffy and pink protagonist in it, it’s more of a miniature golf/puzzle game. If you are a huge Kirby fan and don’t mind not being able to inhale enemies and float above the ground, then tee off with Kirby’s Dream Course. Otherwise, go back and enjoy Super Star or Dream Land 3.

Overall, 6.5/10: Kirby’s Dream Course isn’t a hole in one, but it’s not a bogey. It’s just a shame that Kirby has to be subjected to getting bashed by a golf club.