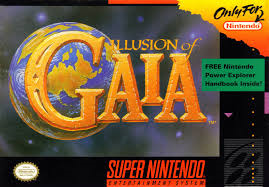 When I think of adventure RPGs for the Super Nintendo, my mind immediately goes to Secret of Mana. That game was a perfect example of how to properly utilize the system to its fullest capacity in order to provide a lengthy and exciting quest. Now, when you play Illusion of Gaia, you will notice that certain things seem to be missing. I’m not only talking about features that made Secret of Mana stand out. Indeed, I’m talking about simple things like game progression and character building. Illusion of Gaia is an odd yet plain adventure title that, at first, seems like a promising mix of action and RPG. However, ridiculous censorship, strict linearity and a lack of variety make this one of the less exciting adventures available on the console.

Taking place in what appears to be our world in a parallel setting, Illusion of Gaia stars a young boy named Will. After surviving a shipwreck and losing his father, Will has developed psychic powers and lives a relatively normal life with his friends. After school, he finds himself in an otherworldly dimension where an entity named Gaia reveals that a comet is headed towards Earth. Only Will can stop the comet by tapping into his powers and by shape shifting into warriors from the past. It sounds like a heavy burden but Will is up to the task. He doesn’t question it. At all. Will be like, “Ok, sweet. Bring it on, Gaia.” Will’s willingness (heh) is impressive. I liked how he just decided to accept the destiny dealt to him. Unfortunately, the rest of the cast doesn’t get as much treatment. Will runs into a variety of characters, but he travels solo the entire adventure and there is a sense of emptiness as a result. Other than Princess Kara, we can only wonder what could have been with the rest of the cast. Characters aside, the story is intriguing. It takes Will across the globe from Egypt to Babylon and from China to Angkor Wat. During his travels, he will get the chance to uncover various parts of actual history.

While the story is interesting, one of the problems with it is the linearity. Once you finish exploring one area, you will never be able to enter it again. Will’s quest is a narrow, one-way path that may have inspired the creation of Final Fantasy XIII. Basic doesn’t even begin to describe the game play. There is no equipment, there is no shopping and the townsfolk have little to say. While there are treasure chests, the only thing they have will be a restorative herb or a key item. The only thing that offers a little bit of variety is that Will can find 50 Red Jewels and exchange them with a jeweler for small bonuses. Obviously, this means you can permanently miss some of these jewels if you’re not thorough in your searching since you are unable to revisit areas.

Luckily, combat got better treatment. Will uses his flute to attack enemies. As he progresses, Gaia will grant him abilities to overcome obstacles or solve puzzles. Will also gets the ability to transform into two warriors from ancient times. The first is Freedan, a swordsman. For most of the game, you will be turning into him in order to overcome enemies with greater ease and take on the bosses. Near the end of the game, Will can turn into Shadow. Shadow is not really a person; he’s more like an accumulation of energy that takes the shape of a human. Enemies don’t offer experience points. Instead, defeating all of the enemies in an area will let you increase your health, defense or offense by one point. These changes are permanent, and it’s important to make sure Will/Freedan/Shadow is/are able to hold their own in combat. The growth system is unique, but again, it’s almost too basic.

However, basic is not a term I would use to describe game’s look. Large, colorful monsters, huge pyramids, mysterious castles and even outer space give Willeedanow (portmanteau realness) plenty to look at. The characters move well and there are never any stalls, even when the screen becomes cluttered with monsters. The huge bosses are especially impressive. Unfortunately, the music lacks the catchy and exciting feeling that you would hope for in an adventure game that takes you across the globe. A few songs are good, but the majority of them will be forgotten.

One of my biggest problems with Illusion of Gaia is that the version the United States got received some major censorship. If you do play the game to full completion, I recommend checking out the differences and seeing how trivial they really were and how ridiculous Nintendo had to go to ensure the game was family friendly. The censorship and the severe linearity make this a game hard to recommend, even though it will only last you about 15 hours. I enjoyed the game, don’t misunderstand. It offered both a unique look at our world and a different type of quest. Still, in comparison to other adventure RPGs, Illusion of Gaia misses the mark.

Overall, 6/10: Illusion of Gaia is a modest title that doesn’t do anything wrong, but it doesn’t bring anything exciting to the table.