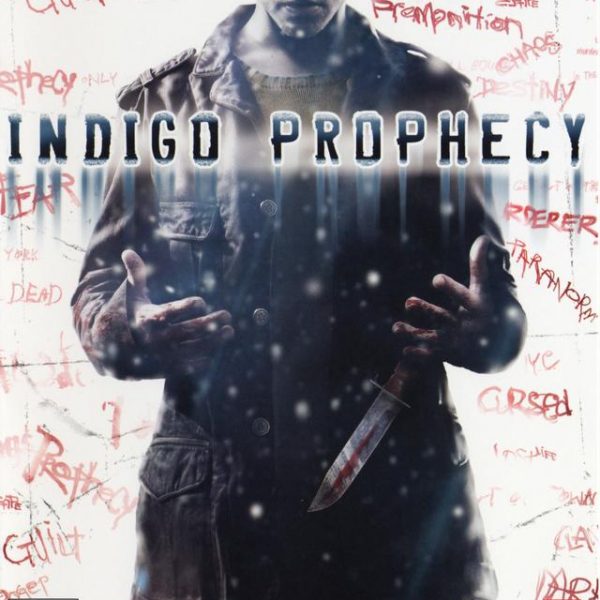 Before attempting to solve the mystery of the Origami Killer in Heavy Rain and before learning the truth about Jodi Holmes’ mysterious connection with the ethereal Aiden in Beyond: Two Souls, Quantic Dream created an interactive adventure called Indigo Prophecy. Known as Fahrenheit in countries outside the USA, this is a game I wish I played prior to Heavy Rain and Beyond. It paints a picture of what will be possible in future titles. It shows how much originality can be accomplished with video game technology. If anything, Indigo Prophecy shows how much ambition and creativity Quantic Dream has. Unfortunately, all of its spirit can cause the game to buckle.

Indigo Prophecy takes place in New York City. At a rundown diner, we meet one the main characters: Lucas Kane. Lucas is a handsome computer programmer that ends up being in the wrong place at the wrong time. Twitching and convulsing as if he were possessed, Lucas ends up stabbing a stranger to death in the diner’s bathroom. Needless to say, Lucas is unlucky. Not only does he need to uncover the truth about a murder he didn’t mean to commit, but he has to watch out for the police, secret organizations and mysterious hallucinations. The story in Indigo Prophecy is the game’s best part. Annoying filler and chapters that outstay their welcome stall the momentum, but piecing together clues about the events in the diner makes it worth a look. Lucas isn’t the only one who needs your help, either. You will take control of his brother Marcus, a priest that hasn’t had much contact with Lucas. You will also take control of two NYPD detectives. One is Tyler Miles, a laid black home-boy that is having difficulty balancing his work life with his personal life. The other is his partner, Carla Valenti. Carla is a perfectionist that puts her work above all else. These four characters and many more will interact with one another as they pursue the truth in a story that combines sci-fi and suspense. For those that see it to the end, the conclusion will feel underwhelming.

After waking up from his trance, Lucas is in a panic and needs to figure out what to do with the body, the blood and the murder weapon. You take control of Lucas and determine what he can do. You can attempt to flee the scene, attempt to cover your tracks or you can do a little bit of both. Such decisions, whether they are during conversation or during some sort of event with a single character, are part of what make Indigo Prophecy so unique. The choices you make alter future events, but no matter which options you select, the overall story never changes. When you’re not making decisions, Indigo Prophecy will feel familiar. You will take control of the cast as they go about their daily lives such as eating, washing their hands or pouring a drink. You do this with the analogue sticks. Some events, namely those involving some sort of confrontation, require you to input directions on both analogue sticks that match the direction on your screen. The indicator looks like the classic game Simon, so you can imagine that it can get really distracting when you’re trying to watch the action. Other instances involve rapidly pressing the R1 and L1 button. Failure to perform will result in a game over and you will need to restart the sequence. Furthermore, you need to monitor each character’s mental state. For instance, if Lucas watches the news about the murder at the diner, he will lose some mental health. However, he can regain it by looking outside or playing guitar.

All of the game play features in Indigo Prophecy offer a variety of ways to make it feel more like an interactive movie. Unfortunately, there are times that things simply don’t work. Moving characters through tight spaces causes the camera to stutter. Sometimes the objectives lack clarity. And of course, it wouldn’t be a Quantic Dream title if the game didn’t glitch and/or freeze. I recall one incident where Lucas is in nothing but boxers and needs to get himself dressed and together before opening his front door. The game kept freezing at the same point. Lucas in his boxers is a treat to behold, but the game freezing is a terrible annoyance.

Actually, most of the game is a treat to behold. Indigo Prophecy is a great looking game. Characters move realistically, NYC is depicted well, and there are some creepy locations that you can explore. For a game like Indigo Prophecy, they work. The game also features a soundtrack with some notable names and bands such as Theory of a Deadman, Nina Simone, Ben E. King and Martina Topley-Bird. However, you have to go out of your way to actually listen to them. Most of the time, there is either no music playing or an uninspired, generic action theme. The voice acting ranges from flat to functional, but there are a few unexpected shining moments.

While there are three endings in this fifteen hour game, there is no reason to go back to Indigo Prophecy for later plays. Since the overall story remains unchanged and since you can easily access completed chapters, it doesn’t take much to see everything. By collecting special cards, you can unlock music, movies and behind the scenes footage. Indigo Prophecy provides a different experience that has highs and lows. The story is great, but moments of filler and the lackluster conclusion take away said greatness. There are some interesting mechanics implemented, but at the same time, they can get overshadowed by the faulty camera and the game’s tendency to glitch. I think my favorite part about Indigo Prophecy is that it shows how dedicated Quantic Dream is to creating a different experience and how they stuck to their philosophies in future titles. If you can’t get enough cinematic interactivity, then you might enjoy Indigo Prophecy. It may not be as memorable as Heavy Rain or Beyond: Two Souls, but it still has that Quantic Dream panache that sets it apart from other games.

Overall, 6/10: Indigo Prophecy starts strong, but has trouble keeping a consistent momentum as you attempt to uncover the truth.