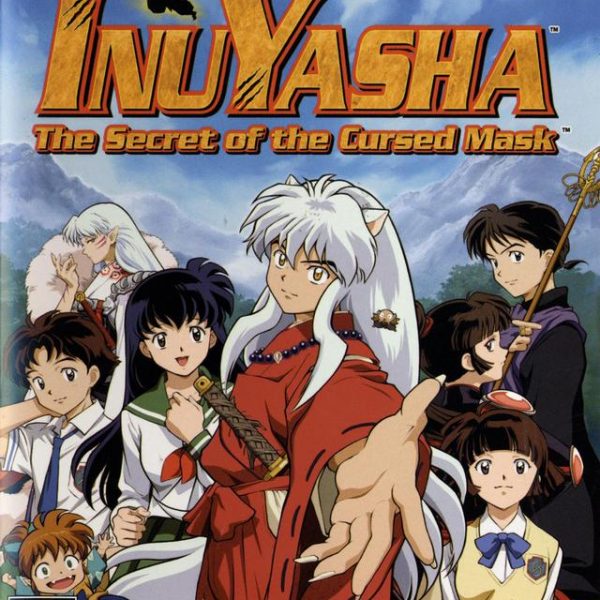 While I read reviews about this game, the thing I gathered was that in order to enjoy this game you have to be an Inuyasha fan. For me, Inuyasha was something to watch when there was nothing else on. However, I still liked the show enough to give the game a chance (even though it was a gift). After playing the game (not to the end…my patience ran out and my blood pressure was through the roof) I have come to the conclusion that you need to have a high patience level, not an Inuyasha craving, to fully enjoy this game.

Story: 6/10
You choose the gender of the character during the start of the game. You have been preparing for a doll festival and go to the storage room to get some supplies. However, a creaky floor board breaks as you walk on it and sends you into a mysterious light. You wake-up in Feudal Japan, and encounter the half-demon Inuyasha. He recognizes your modern type of clothes, and suggests you talk to Kagome to find out what is going on and how to get back home. Along the way, you’ll meet the rest of the Inuyasha cast and hope to uncover the reason for your appearance in Feudal Japan.

The story is very anime and cliche. Granted, this is a game based off of an anime. I liked it, especially how they integrated the new character into the cast of the characters from the anime. However, it was that same cast of characters that made me not like some aspects of the story. What really stinks about this game is that the coolest characters like Seshoumarrou don’t get that much screen time, however the overly obnoxious ones like Kagome and Shippo do way too much talking. This is just a matter of taste, but I think my taste is good when I say I don’t like Shippo…at all.

Game Play: 2/10
Oooohh man…something went terribly wrong here. TERRIBLY. From the looks of the game at a glance, it may seem like this is just another RPG with standard turn-based battles. That’s what it is, but there are a few things wrong with the game play, to say the least. When you’re not fighting, you can do the standard things in a role-playing game. Characters can equip three accessories (there are no weapons or armor), so you can set your characters up, shop for items, and talk to the locals. The world map consists of a bunch of spots on a large map of Feudal Japan, thus making traveling from place to place not a problem at all. Traveling in some of the towns can be quite a hassle at times, however, because the areas often times have hidden passages and routes. This would be fine if these lead to hidden items, but they actually lead to other parts of town (some of these parts are the places needed to advance the story). A lot of the parts of towns were poorly constructed, so it’s a pain to sometimes travel. One cool thing is the ability to grow items via seeds and fertilizers. There are a lot of combinations of various growth items and experimenting is the way to get them. Another really cool thing are the intervals. In these intervals, your main character can spend the day with one of the cast members from the anime. These are not only fun to watch and show off some fly Rumiko Takahashi artwork, but they are also used to build up friendship points. These points are what allow the characters to learn double attacks. Unfortunately, building up friendships and planting seeds aren’t enough to save the game from the battle system…

…and what a battle system it is. The first thing I should mention about the system is that it takes FOREVER and a day to load and progress. Loading times this long are not acceptable on a third-gen system and ESPECIALLY not on the awesome PS2. I won’t point out the specifics on the loadings but, trust me…they suck. It’s these loading times that turn my patience into a frizzled fritter. The battles in Inuyasha are standard turn-based battles. You begin a fight by walking into purple clouds…or so the game’s manual says. Walking around the dungeon area even when there are no purple clouds still gets you into a fight. Walking into a purple cloud GUARANTEES you a fight. The ellipse on the upper-right part of the screen has icons of the characters and the monsters. They move in a counter-clockwise motion. The faster characters will move quicker than the slower characters. When the icon reaches the bottom of the ellipse, you can select a command. There are the usual things such as item usage, defending, a basic attack, running away (which rarely works…annoyingly enough) and tech. The basic attack is just a regular weak attack, but when you get farther in the game you’ll rarely use that option. Selecting to perform a Tech will pop up a list of three new options. Normal Techs are powerful attacks that require no energy, but they can cause you to have a longer period of waiting time before your next turn. Special Techs require energy and are very powerful, but cause even more waiting time. Finally, Double Techs are performed by two members of your party in a flashy anime cut scene. Of course, they require more energy and will cause both characters to have to wait longer for their next turn. When I say energy, I mean the MP of Inuyasha. Getting energy is done in an interesting way. You gain energy by attacking, getting hut, and being healed. Each character can have up to 300 energy. When you get 100, you get an energy orb. What is stupid about this game’s magic system is that magic requires 100, 200, or 300 energy…no where in between. In fact, it doesn’t say how much a spell costs…but how many ORBS it costs. Despite this shortcoming, you probably think that this game’s system is fairly solid. Well, the loading times are what kills it…very, very slowly. Sometimes after a character lands an attack, another character will comment on it…this takes about three seconds of loading time. Also, luck plays an important role in battle and there will be times when you are taken by surprise. This prolongs the battles more. Sure the battles may appear fun at first, but after about the fourth or fifth fight…you’ll be just praying to whatever deity you worship to not have to fight anymore until you reach the boss.

Graphics: 6/10
While by no means the graphics are great like Xenosaga or FFX-2, they still look good to me. The character models have been compared to dolls, but I think they look a bit better than dolls. Sure they lack emotion and body language, but they get the job done and I think the transition from the 2D anime to a 3D game world was done well. The design for the monsters, on the other hand, are crap…just crap. I expect more from an anime heavily based off of demons. The backgrounds are hand painted water colors, but they are a little bit difficult to navigate. There are plenty of anime cut scenes, mainly from the double attacks, and these were done very well. However, a lot of the animation is recycled…something I don’t expect from Rumiko Takahashi. Also, during the dialogue, there are large portraits of the characters conversing. These graphics do what they’re supposed to do: get the job done.

Music and Sound: 8/10
The music does get repetitive, but I enjoyed it because it had an ancient Japan feel to it. Throw in some modern day beats and rhythms and you’re looking at a descent sound track. Some may not like it, others will love it…but I found it nice.

The voice actors come straight from the anime, thus the voice acting was done very well. The new characters in the game have also been placed with some experienced voice actors.

Replay Value: 1/10
There are 10 endings for the male character, 11 endings for the female character, a bunch of scenarios to view, and a bunch of techniques to learn. So why is this replay value score so low? Well, replaying the game requires you to sit through the battles…again! Does anyone want to do that? Maybe if they have low blood pressure. Personally, I’d rather watch paint dry.

Difficulty: Easy
This game is easy and short, but not short enough. I think it was made longer because of the long loading times. The battles themselves aren’t difficult, just long. The story is also easy to follow and the game is very linear.

Buy or Rent: Rent
For the love of the goddess, please rent this and save your cash if you have any intention of trying this game. Trust me, most people don’t have the patience to withstand playing this game long. Hell, I’m surprised I was able to make it as far as I did.

A lot of Inuyasha fans may be mad about what I have to say about this. But ya know what? I don’t care because this is a video game, not the actual anime. Inuyasha fan or not, you have to be pretty obsessed with the anime to play this game for too long.