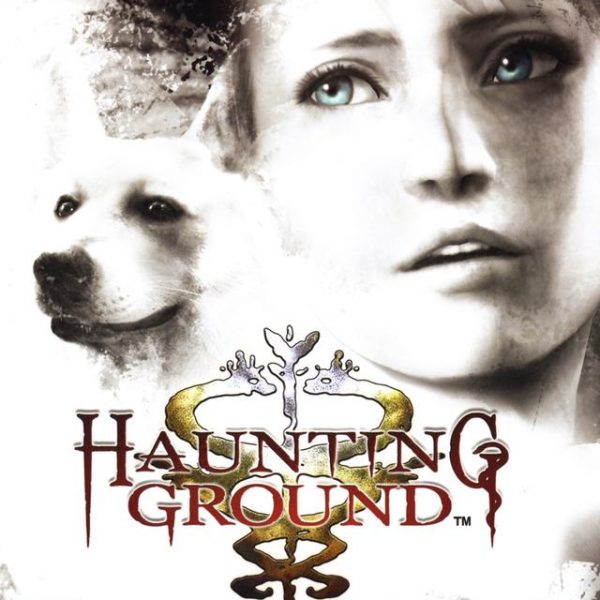 Players take control of Fiona Belli, a blond bombshell of a woman that miraculously survived a car accident with her parents. She wakes up inside a cage wearing nothing but a linen sheet. The cage, as it turns out, is inside a massive castle full of eerie sounds, gothic architecture and hidden secrets. She has no idea how she got there nor does she realize that there are beings in this castle that want to do horrifying things to her. Haunting Ground’s story is as dark as they come. Not only is the premise scary, but the secrets behind Fiona’s circumstances that slowly get revealed to you are equally scary. Haunting Ground is full of drama and tragedy that will leave you guessing and ready for more.

Revealing more of the story requires you to take control of Fiona and guide her through the massive castle. Unlike games like Resident Evil or Silent Hill, Haunting Ground typically has you avoiding one specific enemy depending on where you are in the story. Eventually, you will need to outwit the enemy in order to kill it in a boss battle. Instead of finding ammunition and weaponry, for the most Fiona has to rely on hiding in shadows, under beds or in closets. At the start of the game, Fiona will be by herself and you will get a general idea of her limited abilities. One thing she can do is kick. She can kick breakable objects to reveal items, kick enemies in order to make an escape and kick parts of the castle in order to solve one of the game’s many puzzles. Throughout the castle are medallions that can be used to create items. Most of the items can be combined to make bombs that act as diversions and allow an escape from an enemy. Furthermore, you can make new secret accessories for Fiona that let her recover stamina quicker, give her kicks more impact or reduce the length of her panic attacks. When Fiona enters a state of panic, the screen gets blurry and goes from color to black and white. She is also hard to control. If you’re not careful, she can run into inanimate objects and fall. Ultimately, this means the current pursuer will catch up and kill her.

It sounds like all of the odds are against Fiona, but careful planning and smart use of the environment will throw off the pursuer and allow you to continue. It’s tricky at first, but the controls are much more responsive in comparison to Rule of Rose. Furthermore, Fiona eventually befriends an adorable white husky named Hewie. Fiona can give Hewie commands to fend off enemies, find items, and solve puzzles. Unlike Rule of Rose’s Brown, Hewie does not always obey and needs to be scolded when that happens. However, when Hewie does something right, it’s important to give him a reward or pay him attention. The relationship between Fiona and Hewie is a fun feature and will determine which ending you receive. Without Hewie, Fiona’s situation would have been nearly impossible. Thanks to the help of this pooch, Haunting Ground’s challenge doesn’t feel as intimidating. At times it can be frustrating when you have to keep running from a pursuer, only to have to go back to where the chase began to continue solving a puzzle. Still, it adds to the atmosphere of the game and finding creative ways to ensure Fiona’s safety is fun. The most satisfying aspect of the game play is watching the current pursuer reach their demise thanks to the efforts of Fiona and Hewie.

Needless to say, Haunting Ground is a beautifully gruesome looking game. All of the character models are lifelike in proportion and have exceptional detail. While Fiona’s bust tends to bounce unrealistically, it doesn’t take away from her character. Hewie is downright precious. As a dog lover, I really enjoyed seeing the dog have so much personality and realism. Fiona will encounter only a handful of enemies throughout the game. The bosses that give chase range from menacing to frightening. During the game’s many cut scenes, the PlayStation 2 really gets pushed to its limit as it displays some of the most polished visuals ever seen. Adding to the atmosphere is a minimal but impactful soundtrack, bizarre sounds and solid voice acting. Haunting Ground fully delivers with its audio and visual presentation.

Fiona’s and Hewie’s quest is a standard 10 to 15 hours, depending on how much backtracking and item crafting you do. Finishing the game will unlock a harder difficulty and the ending you get will unlock a new outfit. There is also a mode that lets you control Hewie. Just like Rule of Rose, Haunting Ground has a high price tag that may turn off those interested in it. I suggest doing what you can to experience this unique game in some capacity. Figuring out ways to progress and/or defeat a boss isn’t always clear and at times the story can seem relatively convoluted. However, the overall experience of Haunting Ground makes up for its issues and comes highly recommended by me to all fans of survival-horror titles.

Overall, 8/10: Ignoring some annoyances, Haunting Ground is a solid title that puts the “survival” into the survival-horror genre.