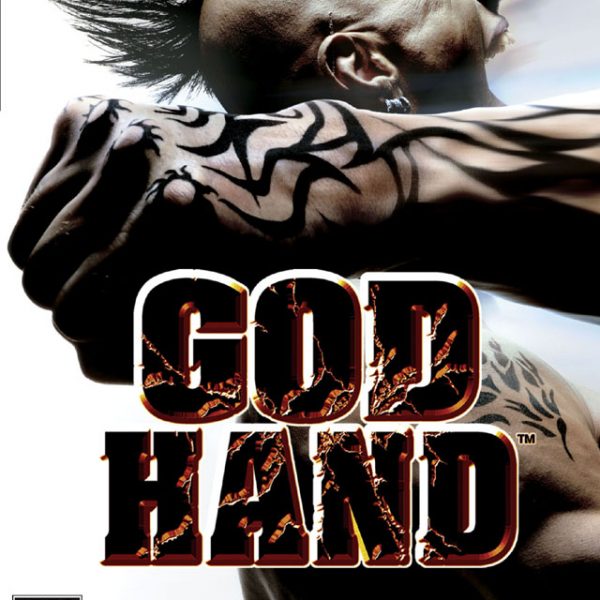 There are two things I can count on when an action game is dubbed a “beat ‘em up.” The first is fun but frustrating game play. There are litters of enemies coming at you from every direction, with huge bosses that take a lot of button mashing to topple. Often times found in arcades, these sorts of games have an inflated difficulty that cause the player to use every last quarter. The second is an overly cheesy story line with heroes and villains to match. Looking at games like Bad Dudes, Streets of Rage, and X-Men just to name a few, the settings and scenarios are over the top, ridiculous and shouldn’t be taken too seriously. In God Hand, Clover Studio’s swan song, the two criteria are fulfilled. However, there is one key difference between God Hand and the above mentioned beat ‘em ups: God Hand is in 3D. 3D means there’s a camera. A camera can mean that there are issues. God Hand’s camera causes issues. It’ll cause you to cuss, turn off the PlayStation 2, punch a pillow…you name it. But, you won’t quit. God Hand has an addictive play style that trumps the frustration. This, plus a hilarious storyline and protagonist make this a game worth playing.

Years ago, there was a battle against demons that ended in victory due to humans gaining the powers of gods. Dubbed God Hands, these folks are now scattered throughout the world. One owner of the God Hand is Gene. Good natured but outspoken, Gene and his friend Olivia need to rid the world of demons with the power of his God Hand. It sounds somewhat serious, but the one-liners, interactions, antics and campiness make it anything but. There are many references to previous eras of games and pop culture that will make gamers of all ages smile. The laugh out loud moments are plentiful; even the ending credits are hilarious. It’s an interesting dichotomy: the story is goofy, but when you take control of Gene, things get real.

But, before getting to that, I want to point out two fantastic aspects of God Hand: the graphics and the audio. God Hand looks lovely. The 3D models are well proportioned, move well, and come in a lot of variety. The bosses are especially unique. Gene’s plethora of attacks string well with one another. The stages are slightly bland, but it’s a minor nitpick in a game with otherwise gorgeous graphics. The voice acting and music are the cream of the crop. The music is catchy, silly, quirky and fits right along with the story. The voice acting matches the music’s quality. God Hand is proof that the PlayStation 2 is supreme with technical staying power.

With a power named the God Hand, one would think Gene would be able to obliterate goons (clearly inspired by your favorite anime series’ from the 80s) without much trouble. The truth is that button mashing is the best way for you to see the “Continue?” prompt. God Hand is a hard game. Gene is a capable fighter. He starts the game with a variety of punches and kicks, and as the game progresses he can find new ones from treasure chests or purchase them in a shop. There are many techniques to select that come from various schools of martial arts. The neat thing is that you put them in any order you like. Some allow you to break enemy guards, juggle them, or send them soaring across the screen. Finding the right set of moves can take some time, but it’s satisfying to see a combo you worked on come together. Along with his punches and kicks, Gene can dodge, dash and duck from his relentless enemies. Gene’s miniscule life meter leaves little room for error. While you can increase it in the shop, doing so costs money. Money is hard to come by in this game. In fact, the only way to get everything the shop offers is to gamble it in the casino with something like blackjack or poker.

A more surefire way to get enough cash for the things you want is to play better. In other words, the better you are at God Hand, the better your rewards. Good playing yields good results. The game begins on level one. As Gene dishes out the pain without receiving any in return, a meter builds up. When it reaches the top, Gene will “Level Up” and enter level two. The other two levels are level three and level DIE. The higher the level, the more brutal the punishment. Gene is already at a disadvantage due to enemies being tough; the progressing difficulty levels make things even more challenging. 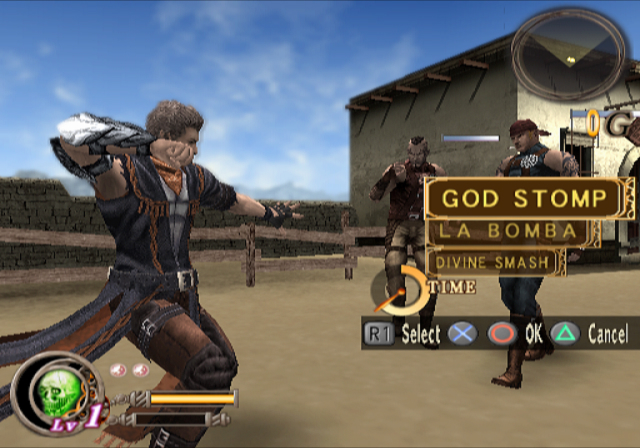 The God Roulette is fun, handy and easy to customize.

Some good news is that Gene has a couple of extra tools at his disposal. The first is the God Roulette. You can set some extra powerful attacks on this roulette, activate it, and then watch the chaos unfold. These are finite, but effective. His other tool is activating his God Hand. After Gene gains enough tension, he can unleash its power  to gain invincibility, lightning speed, and the ability to handle groups of foes with ease. Finally, knocking any foe senseless enough times will activate a button prompt in which you can unleash free, extra damage. These are very satisfying. Still, for all of these features, God Hand is a tough game. Gene can’t block. Gene can’t shoot projectiles. Gene gets stunned easily when enemies guard his attacks. The odds are against him, and the frustration is real. But, every time you watch him fall, you’ll grit your teeth and get back up. The feeling of accomplishment from knocking over a powerful boss or group of foes is palpable and worth the frustration.

But! The biggest problem with the game – something that would have caused less frustration – is the camera. Sure, not having enough cash is frustrating. Sure, gradual increases of difficult are frustrating. Sure, other minor aspects are frustrating. But, they’re part of the fun. The camera, though? Not fun. In fact, I can’t blame people for dropping the game due to its camera. The camera is slow, and Gene suffers greatly for it. It’s always behind Gene’s back, but actually turning it to face an enemy is a slog. Trying to get Gene to turn 180 degrees is equally messy. Since enemies don’t have to worry about it, they can get away with moving normally and pounding Gene into submission.

By the end of the game, I had 89 game overs. Yes, the game kept track of the amount of times that Gene got wrecked. Doing all of this took about eleven hours. I’m confident in saying that I would have less time (and less of a game over count) if the camera was better behaved. Despite that, God Hand was still something that I’m glad I got to experience. It’s one of the most unique beat ‘em ups out there. There’s lots of creativity, humor and fun. I recommend it, but get ready for some frustration.

Overall, 7/10 – Join Gene on a quest to right wrongs and get pummeled. God Hand is a fun yet frustrating beat ‘em up and gives a fond farewell to Clover Studio.