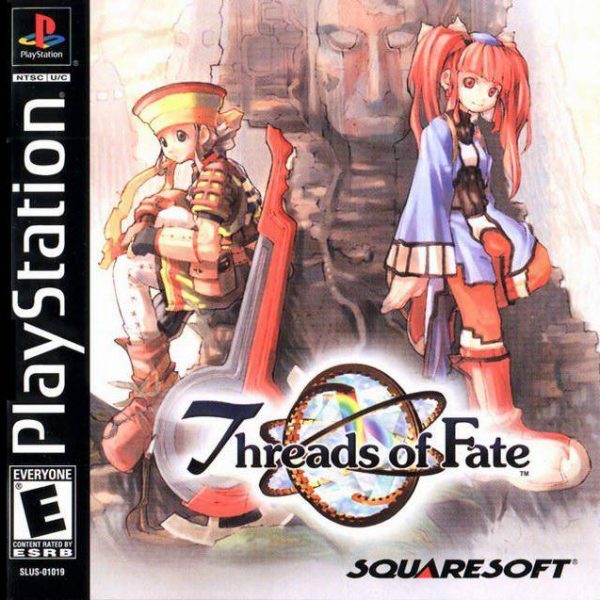 Author’s Note: This review was originally published on March 25th, 2003. It was later updated with “witty” taglines on March 6th, 2009. I regret adding these taglines. They feel out of place.

I bought Threads of Fate when it first came out many years ago. While the back of the box promises two quests, the reality of the situation is that you get two mini-quests. Both of them are fun, and both of them have minor differences. Regardless of the misleading feature, Threads of Fate is a fun, under appreciated action/RPG that just about anyone can enjoy.

A Boy, A Girl, and A Relic.
At the start of a new game, you pick either Mint or Rue. Both wish to find a Relic, an item left behind by the might Aeons many years ago, that can grant any wish. Mint wants it to get wealth, power, and revenge. After her sister took the thrown, Mint decided that uncovering the Relic would be the only way to get back what is rightfully hers. Rue, a young boy with the power to change into monsters, wants it to revive his lost friend. On a snow evening, Rue and his friend Claire were enjoying themselves until a monster named the Death Arm entered their territory. In order to save Rue, Claire got in the monster’s way.

As you can see, both stories are very different. Mint is more of a lighthearted, enjoyable story whereas Rue’s scenario is more serious and emotionally driven. Both characters meet up with one another from time to time. Each quest will take about eight to ten hours to fully complete, with all side-items gathered. Despite the length of each tale, it is fun to see the story told from different points of view. Mint and Rue sorta develop differently as time progresses, but nothing mind-blowing. The supporting cast doesn’t change at all either. It’s such a shame because each character and NPC is unique, and it would’ve been interesting to see them grow over time.

Better Than Brave Fencer.
Remember one of the earlier Playstation action/RPGs by Squaresoft, Brave Fencer Musashi? Yeah, that was not fun. I was a bit worried that Threads of Fate would play similarly to that travesty. Luckily, I was wrong. The controls are very easy to learn. Your character run, jump, and interact with the environment. The game takes place in the city of Carona, which acts as your home base. Here, you can shop, buy upgrades for your characters, and talk to the local townsfolk. You can also fight a weapon-smith for money. Typically, money is hard to get in this game. So, any method of getting more income is welcome.

After you certain plot points are finished, you can leave Carona and go to a dungeon. Here, the combat begins. Very fun. Both characters fight differently. Rue uses a giant axe that creates a 3-hit combo, and has the ability to transform into monsters. After he slays a beast, it may drop a coin. Rue can carry up to four coins, thus he is able to have up to four options of monster transformation. As a human, Rue also has a horizontal slash attack.

Mint uses magic rings to attack. Again, she can create a three-hit combo. Mint also has the potential to earn a bevy of powerful spells. By combining a type of magic with a color of magic, the possibilities are limitless.

The combat itself is very fun and innovative. Attacking a foe recovers MP. Getting hit will slowly increase your HP level. There are no levels to gain, only equipment upgrades. Overall, the combat was greatly improved from Brave Fencer Musashi. While there are a few camera issues at times, the majority of the game is solid and easy to control, filled with challenging bosses and interesting puzzles.

Colors Galore!
Typically, I frown upon a Playstation game that brags about having 3D graphics. Luckily, Threads of Fate is not only beautiful, it is colorful. The backgrounds are lush and detailed. I really enjoyed how every environment was so different from one another. Mint and Rue look great, as well. Little things like Rue’s ribbon blowing in the breeze and Mint’s pig-tails swaying to and fro show that Squaresoft was attentive to every detail. The monsters, while not threatening in appearance at all, look great.

Golden Silence.
Another plus that Threads of Fate has over Brave Fencer Musashi is the fact that there is absolutely no voice acting. Furthermore, the sound effects are much more solid sounding than I have heard in other games, even by the standards of today. The lack of voice acting is accompanied by awesome music. There are tons of upbeat, lifting tracks that set the mood for this lighthearted adventure, yet are able to change when things get serious every once and a while.

It Takes Two.
After you finish one quest, you will probably want to see the second person’s quest and their differences. Playing as both is a treat because of how different Mint and Rue act from one another. When you wish to replay the game a third time, you can start a new file with the character statistics left over from the previous adventure. While this may make the game easier, it does not stop it from being fun. Overall, Threads of Fate is an under appreciated action/RPG that more than made up for Brave Fencer Musashi. While it does have some flaws, and a bit of problematic boss battles, those looking for a fun game to pass the time should look into Threads of Fate. Best of all, when you finish the game once, you can experience an all new quest all over again.