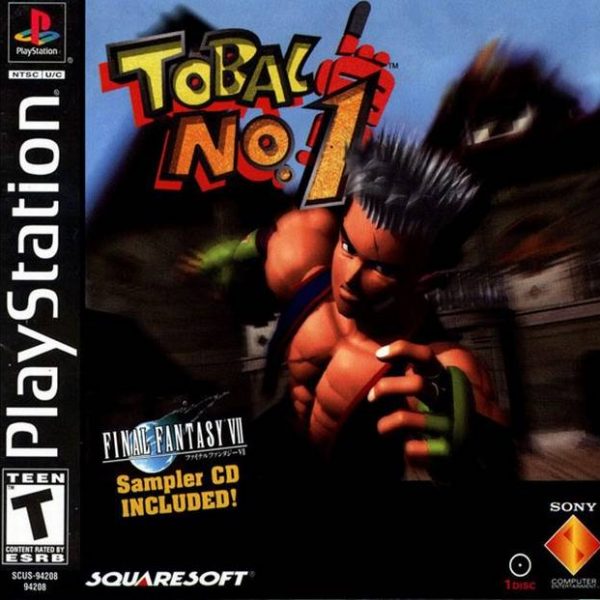 When you think of Squaresoft, you probably don’t think of 3D fighting games. You probably don’t think of a fighting game from them being very good, either. Thus, you can imagine my surprise when I went through Tobal No. 1 for the first time and had a good time with it. Usually, I prefer my fighting games to be in the 2D realm and have more emphasis on flashy combos and zany projectiles. Tobal No. 1 takes an approach similar to Virtua Fighter and relies on realistic fighting styles and encourages players to not button mash their way to victory. For a game that was released near the beginning of the PlayStation’s life, there is something nostalgic about Tobal No. 1. I think most fighting game fans will be surprised at how well this little gem has aged.

Like most fighting games, it’s easy to pick a fighter and jump into the arena. However, Tobal No. 1 has a trivial story that is worth a glance. It takes place in the future on the planet of Tobal. This planet has vast amounts of an ore called Molmoran, which is used as a trading good and/or as an energy source. Every year since its discovery, tournaments have been held in order to determine who can gain ownership of the ore’s deposits. Various denizens from various planets in various solar systems have gathered to compete in another tournament. That’s about it. It’s an interesting premise, but there are no character prologues or epilogues. There is very little is revealed to you about the rest of the Tobal world. In fact, most of the exposition comes from the instruction manual. Still, it’s something to think about when you’re duking it out against either a CPU player or a second player.

Tobal No. 1 has familiar modes of fighting game play. Tournament Mode lets you select a player and fight against the computer. Versus Mode lets you play against a friend. Practice Mode is where you can perfect your favorite fighter. After selecting a character, it might take some time to adjust to Tobal No. 1’s controls. Since this is a 3D fighter, you can move up and down in the arena as well as left and right. Double tapping a direction will let you dash or perform a run. Characters can jump, but not very far or high. Like I mentioned before, Tobal No. 1 feels similar to Virtua Fighter. Each character has the ability to mix high, medium and low strikes based on a variety of realistic fighting styles. The combination of strikes can make unique combos. Furthermore, some characters specialize in wrestling or grappling. Throwing in Tobal No. 1 can be more useful than punches and kicks with the right characters. All of this together makes a fighting game that is relatively simple to play but tricky to master, especially if you want to become versed with all of the characters.

A unique aspect of Tobal No. 1 is Quest Mode. Here, you select a character and navigate him or her through a 30 floor dungeon that has traps, treasure and various opponents. It’s a neat idea when you start it up and the rewards for completing it are tempting. However, moving your character is tricky. You’ll likely end up failing Quest Mode because the controls didn’t respond properly. Unlike the normal fighting modes, Quest Modes controls take more adjustment than necessary and the slightest misstep will result in a game over. Power ups and recovery items help, but only the most dedicated will attempt to get through this labyrinth.

No matter which mode you play, one thing is for sure: this is a great looking game. Dragon Ball Z and Chrono Trigger artist Akira Toriyama created the characters for Tobal No. 1 and their transition into 3D looks great. I’m not a fan of his style, but the PlayStation captured his ideas properly. Characters move well and fight in some impressive arenas. The dungeon’s hallways start to look the same near the end of the trek, but the enemies you face are both unique and imposing. Watching a character you’ve mastered execute stylish grapples or swift combinations of punches and kicks never goes out of style, either. The music in Tobal No. 1 is as varied as the characters and their appearances. A variety of Squaresoft maestros came together to create a soundtrack that has pop, rock, techno, trance, and more. Character voices are equally varied, but not all of them work. In other words, some of them sound as you would expect. Some of them are annoying as you would expect, namely the robot named Hom. At first, he’s fine. Sometimes he’s endearing. Eventually, his shouts and cries will grate on your last nerve.

When it was released in North America, Tobal No. 1 arrived with a Squaresoft sampler disc that came with preview movies of Bushido Blade, SaGa Frontier and Final Fantasy Tactics. The most important item on that sampler disc was a playable demo of the then ominously hyped Final Fantasy VII. It wasn’t until long after this RPG colossus was released that I knew of Tobal No. 1 and the sampler disc that previewed some of Square’s later classics. I think that’s the main reason why I enjoy Tobal No. 1 more than I expected; there is a sense of nostalgia there that comes from Squaresoft’s attempt at a fighting game and because the sampler disc that came with the game contained cryptic information about games that would provide me with so many wonderful memories. If anything, Tobal No. 1 is worth a look because it will give you a chance to take a stroll down memory lane. Even if your copy doesn’t come with the extra disc, Tobal No. 1 still provides a solid fighting game experience.

Overall, 7/10: Where it lacks in story, Tobal No. 1 makes up for it in personality and graphical presentation. This is an underrated fighting game that fans of 3D fighters should enjoy.