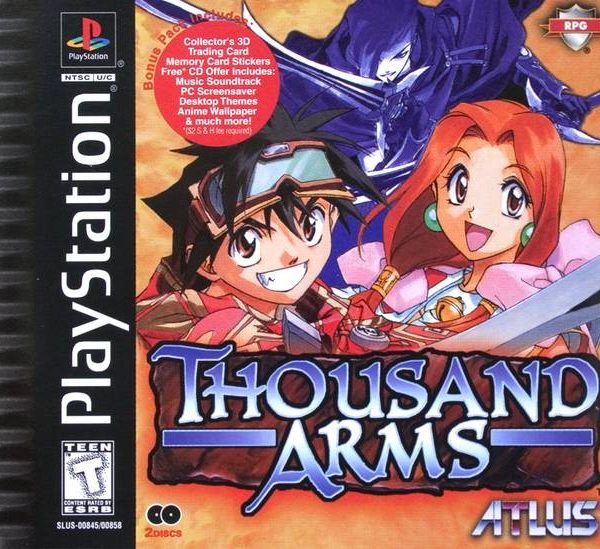 Author’s Note: This review was originally published on April 4th, 2003. The “Triumph” part of Kashell Triumph does, indeed, come from the main character of Thousand Arms.

Thousand Arms was a game I was skeptical about getting, despite it being full of anime. The reason was because of the horrid battle system. But it’s still a game worth trying…that is if you can still find it.

Meis Triumph (my last name!) is a member of the legendary Triumph family who excel at being blacksmiths. He has left his home and now is on the road. He meets up with the beautiful Sodina Dawnfried. Meis and her set off on a quest to allow Meis to reach his full potential and save the world from the on coming darkness. Yeah, very cliche and lighthearted. But…that’s what I like in stories. The thing with TA is that your climatic twists aren’t climatic, you know what’s going to happen next, and you know who will be the final boss. I really loved the characters in this game, however. Most of them are cliche, but they’re still all REALLY great. They grow really well overtime, and you will surely fall in love with most of them. Other than the dates, this part of the game really shines.

Now for the game play, the aspect of a game that makes or breaks the experience. The menu is kind of annoying to get used to. You’re going to acquire A LOT of items and spells, and managing them is a major ***** and a half. Walking around the towns and dungeons is also annoying. Meis makes this really odd sound when moving. Also, talking to someone can get frustrating because of the crazy camera angles. But now for the good part…
You can go on dates with the 9 females in the story. By doing this, you raise their love level for you. When that goes up, you can learn new spells and skills by going to a blacksmith room. All of the dates are different, unique, and totally fun. The voices fit the characters perfectly. Each woman has a special spot to date, and that unlocks secretes. You can also play their own special mini-games and give them presents to increase their feelings for Meis. This part of the game is truly the best feature, because the dates are what I did much of the time and enjoyed doing.

But you don’t save the world by going on dates; you do it by battling foes. In TA, this really bites. You have a party of three, but only the front character can fight the enemy in a one on one type of battle. The other two will support you with their own special cheers, or taunt the enemy with their own special provocations. They can also use items and cast spells. This really bothered me, because all of the characters were really cool and it sucks that you really can beat the game easily with just Meis in your party. All the characters had their own unique weapons, skills, and styles as well. You can switch around, but it’s still no fun. Battles also occur ALL THE TIME and you’re going to be fighting a lot! The battles are turn based with a twist. Say you select Attack. A meter above you goes down and when it reaches the end, you press a button. This allows you to attack. If you don’t press it, you miss your turn. This is actually easier than it sounds. The same thing goes for spells and items. Battles are really repetitive and boring, definitely the low point of the game.

At least, the battle graphics are really nice. The characters are in full form and beautifully drawn. The spells are sort of bland, but not an eyesore either. The monsters are very well made. You will see plenty of repeat monsters though. The bosses are very nicely done, full of unique detail. The field graphics are another story. They’re very poorly done 2D sprites in a 3D world. They are very blocky, and look really goofy. The backgrounds are nothing special, just your average deal. There are anime scenes in this game though. These are VERY well drawn, and the fluid anime is something to always look forward to.

The audio department is another one of the weaker attributes this game has. The opening theme is sung by Ayumi Hamasaki, so that’s always a plus. But the battle music, town music…it’s just average. Nothing out of the ordinary. You may hum along sometimes… The sound however brings this department way down. Ugh…this game has the worst voice acting I’ve ever heard. They lack emotion and zest and most importantly: TALENT. The sound effects are there. It’s nothing bad or good…just there.

This game is short and easy. I can assure you, you won’t be going back to play this game after a LONG time, if ever. This game lacks replayability to the extreme. This is why you should rent it. In the end, I was upset by the game’s potential. If you’re looking for a break from the serious type of RPG, but are able to have patience with the bad battle system, then Thousand Arms is a good way to go. All I can really remember from that game are the dates.