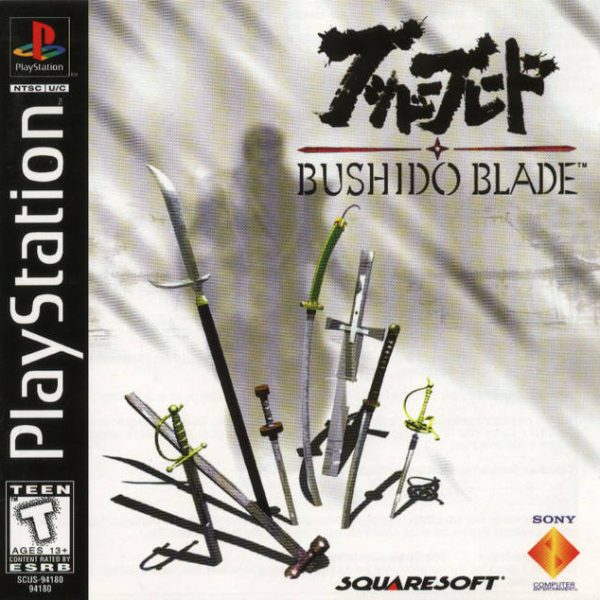 As much as I love fighting games, there is something to be said about their lack of originality. You can probably count on two hands the number of fighting titles that have a character shoot a fireball from their hands by inputting down to forward punch. Or, in the case of my favorite guilty pleasure, Guilty Gear, 236HS. Either way, you know how it goes. Bushido Blade is a little different. There are no life bars, no energy balls, no combos and no high jumps. This is a unique fighting game that may not be for everyone, but those who like precision and technique will appreciate what Bushido Blade has.

Set in a modern time but in a dojo that looks like it was from feudal Japan, Bushido Blade tells a rather bizarre tale. The people in the dojo belong to a group called Kage, and are tasked with protecting a cursed sword and keeping up with the ways of Bushido. When one of the members (i.e. you) escapes, he/she needs to kill their comrades in order to reach safety. I have to say the story is absolutely ridiculous, which is expected for a fighting game. But this is taking it to a new extreme. Characters are unique, so I suppose it fits the setting.

Speaking of which, the characters aren’t the only things you’ll pick when you begin the game. When you start, you will select a character and then a weapon. You have six characters to pick, and one of eight weapons. There are typical katanas and nodachis, but also long swords, rapiers and even a sledgehammer. Certain characters perform better with different weapons, but no matter what you pick you’ll have to take range and weight into account. When the fight begins, there is no announcer saying “Round 1” or anything like that. Instead, your foe will say something to you and then begin their attack. You can slash them apart if you wish at this moment, or you can do the honorable thing and wait. Depending on how honorable you are, you’ll see a different ending for that character.

The actual fighting is also very different. Since this is a more realistic fighting game, one slash can end it all. Hit your opponent in an area where it counts, and you’ll see a flash of red indicating that they are dead. If you slash elsewhere, you will wound them. You can make them limp on one leg, make them lose the use of their arm, or even paralyze them from the waist down and watch as they slash helplessly at the air. Furthermore, with the push of a button, you can enter an upper, middle or lower stance to change your attacks. It’s a great formula and a different method of fighting. One slash can end it all, and if you aren’t careful, you could see the game over screen before you know it.

While the characters look a bit silly, keep in mind that this is an early Playstation game and 3D is still new for the time. That doesn’t mean that there are some redeeming features for the graphics. The stages aren’t little arenas. Instead, you can run through an entire castle as you jump and crawl through various areas. Also, one area is a bamboo forest. Slashing at your foe will cause you to cut down some brambles in the process. The attention to this sort of detail is quite impressive, despite some of the ugly character models. The music in Bushido Blade uses traditional Japanese instruments and takes a backseat to the rest of the game. They fit the game perfectly, making you feel as though you’re part of ancient Japan.

As you can see, Bushido Blade goes 180 degrees from the traditional fighting game formula. Alongside the main mode, there is a versus mode and something called Slash Mode. This last mode will pit you against an arsenal of samurai, but finishing it will let you play as a hidden character. The downside to this is that this hidden character can only be accessed in versus mode. There is a good chunk of stuff to offer folks with Bushido Blade, but it all ends before you know it. In one afternoon, you’ll likely finish all six of the characters scenarios, play a few times with versus mode, try out all of the weapons and even clear Slash Mode. Bushido Blade’s largest flaw is that it lacks in replayability. As awesome as the fighting is, it feels over before it even begins. Still, I highly recommend the game to those who like a different flavor of fighting game. The lack of extras might turn some people off, but the unique swordplay combined with a variety of weapons and stages makes Bushido Blade a slashin’ and stabbin’ good time. For some, it will last an afternoon, but for others it might just last a bit longer.