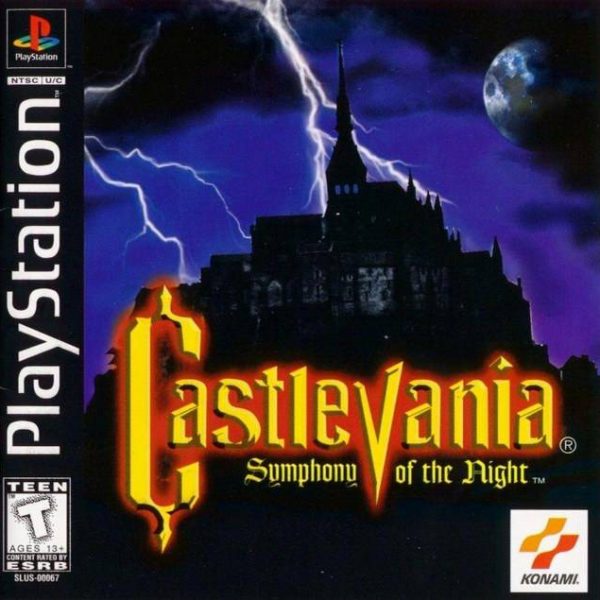 Castlevania: Symphony of the Night is…actually, you know what? No, I’m not even sure why I’m writing a review of this splendid title right now. It has been over a decade since its release and everyone should know by now that it stands as a great game in the series and on its own. I guess I feel like giving the game more love. So, I’ll stop the introduction here and get into it.

The game takes place after Castlevania: Rondo of Blood. Four years after Richter Belmont took down Dracula, the mysterious castle reappears out of thin air. Does this mean Ol’ Drac is back already? Hard to say, but Richter has gone missing and his cousin, Maria Reynard has decided to enter the castle on her own. But, the game isn’t about any of those vampire hunters. Instead, players take control of the androgynously sexy Alucard, who also happens to be Dracula’s son. A half-vampire with amazing powers, he fearlessly enters Castlevania in order to put a stop to the goings on. This is a classic story of father versus son and along the way, Alucard will learn the truth about the mysterious reappearance of the castle.

However, the good stuff that makes Symphony of the Night so memorable is the game play. Dubbed the first “Metroidvania” in the series, players will have limited access to the monstrous castle until the unlock Alucard’s full potential. Certain areas can only be accessed once he has gained the right power. Alucard starts off with a few abilities and magic spells, but by the end of the journey he will be able to equip a variety of swords, shields, capes and armors. He will be able to summon familiars. He will able to transform into a bat, wolf or ethereal mist. He will even have access to a shop where he can buy new gear. He will level up as he journeys onward. It’s like Konami combined the best elements from a variety of genres and handed them on a silver platter to Alucard. Wait, don’t vampires hate silver? Well, you get the point: traversing throughout this huge castle and finding all of the secrets within is addictive and enjoyable.

Just like Alucard, Symphony of the Night has a look of eternal beauty. This is a 2D masterpiece with so much stuff to see that describing it in a review doesn’t do it justice. Watching Alucard fight a plethora of monsters and bosses with a surplus of weapons and magic is a sight to behold. With music composed by Michiru Yamane that mixes pop, electronica, gothic and techno the game is a joy for all senses. Give the songs a listen when you get a chance.

But, really, by now everyone should know that this is a great game. Sure, it’s a bit short and some of the voice acting is cheesy. However, these shortcomings don’t do a thing to prevent Symphony of the Night from being a classic that should appeal to anyone who simply enjoys playing video games.