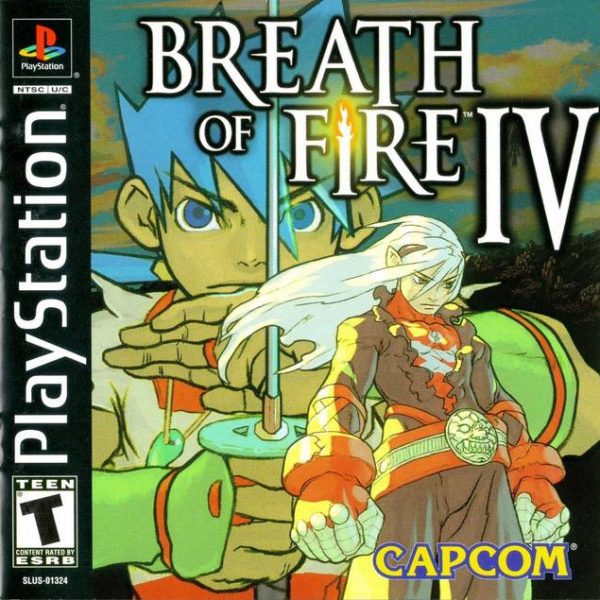 To this day, I still consider Breath of Fire III to be one of my favorite games of all time. It has the features many third-gen titles seem to lack, such as well developed characters, a colorful world full of things to do, villains that are just aching to be slaughtered, and a story that keeps you hooked until the end. Capcom’s Breath of Fire IV, obviously, had some big shoes to fill. Also, it was an opportunity to fix some of the problems that were in Breath of Fire III. Overall, the game was fun but also a mixed bag of an experience.

Breath of Fire IV is the story of a young boy named Ryu. Yes, he’s back. So is Nina. In fact, the game starts off with Nina, the Wyndian princess, and her best friend Cray on a search for Nina’s missing sister Elina. Since a war between two continents ended, an armistice was reached and Elina, hailing from one of these continents, vanished. After Nina’s and Cray’s Sandflier gets ruined by the Sand Dragon, Nina sets off to find parts for it. She ends up meeting Ryu, the mysterious blue-haired boy who has no idea who he is, where he comes, or why he has no clothes on. Tee hee. The two end up traveling together to a nearby village in order to find out more about Ryu, as well as find some parts needed for their Sandflier.

Just like Breath of Fire III, the fourth installment begins with a mysterious boy without any identity. However, the similarities end there. Ryu’s quest is about more than one of self-discovery. It involves the history of a global war that has the chance of returning to the world once again, the methods diabolical villains will use to achieve their goals, and a path of learning what it means to be compassionate. Ryu will have some of the best developed allies join him in his quest. The chemistry between them was scripted very well. The story and characters are serious, but there is a ton of humor thrown in for good measure. Best of all, dragons play a major role in the plot and everyone loves dragons.

Exploring the world of Breath of Fire IV is similar to how it was in Breath of Fire III. The world map is a flat, 2D plane that lets you point and click to your destination. When you move from one point to another, an exclamation point may appear over Ryu’s head. Hitting the X button will allow you to explore these little areas and provide you with an item. Often times, going from one story destination to another will require you to go through a small dungeon, such as a mountain path, a valley, or a forest. Other dungeons can be a bit more involved and include puzzles and/or mini games. Yes, once again, the mini-games have returned. Comparing them to the mini-games in Breath of Fire III is difficult. Some are better, some are worse. The faerie village makes a return, which was a treat. Fishing is back, and it can be fun at times, but whoever changed it from the way it was in Breath of Fire III needs to sit in a corner and think about what he or she has done.

Once you get to the end of these stages, you have the ability to skip over them when you need to backtrack somewhere. Later in the game, you get the ability to teleport to any location on the map you have visited in your travels. This was a wonderfully convenient feature that was desperately needed in Breath of Fire III. However, unlike Breath of Fire III, the camera was a problem in Breath of Fire IV. Unlike games with cameras that allow a full range of motion, Breath of Fire IV’s camera rotates by 90 degree intervals. Certain towns and dungeons are cramped, full of narrow passages and halls. Rotating the camera by 90 degrees rarely helps. It would have been fine if they stuck with the camera in Breath of Fire III or they used something similar to the camera in games like Xenogears or Grandia. This is such a shame because the towns had tons to offer with shopping, locals, and treasures to find. Having that accursed camera hinder your exploration makes things a problem.

Breath of Fire IV’s presentation is, much like the rest of the game, a mixed bag. First up, we have the graphics. The sprites are detailed and have a large variety of motions, but their colors seem to have all been dragged through the mud. By this, I mean they lack brightness. This makes the game look murky. Sure, there was a wide variety of color used for the models, but their potential went unrealized due to the low brightness. The character portraits and some of the environments suffered the same treatment. Luckily, the battle effects such as spells and dragon skills look as awesome as ever. New to the series was a fabulous opening animation sequence and some of the most interesting dungeon designs ever seen in an RPG. If not for their murky appearance, the graphics would have been a major highlight of the game.

Breath of Fire IV’s audio department was probably the best part of the game. Unlike Breath of Fire III’s jazzy, electronica sound-track, Breath of Fire IV’s focus is an epic and oriental masterpiece. Towns, dungeons, battles, and every area in between have an excellent tune accompanying it. Staying true to purist nature, the voice acting is entirely in Japanese. Not only does this pertain to battles, but to the opening animation sequence as well.

Ryu and his team will find plenty of monsters and villains ready to prevent them from achieving their goals. That can only mean one thing: Ryu and his team must prepare their weapons for battle. The battles in Breath of Fire IV are similar to how they were in other installments in that they use a turn-based system. At the beginning of a battle, you pick your actions and then duke it out with the enemy side. Those with higher agility attack first. One of the niftiest features is that you have all characters in the battle. You will get a total of six party members, but only three can battle at a time. However, you can pick the order in which your team attacks AND swap out any party members at will. This was a great feature, and I’m glad that they brought it back from the original Breath of Fire. Swapping out party members is not only nifty, but important. Certain party members perform better than others against certain enemies. Also, party members in the back row are able to recover magic points. This is a very handy feature because magic plays a vital role in battle. Sure, a fire monster is weak against water/ice magic, but the most important feature that magic plays is in the Combo System. By having your characters perform spells, damage can stack in a combo attack. The right combination of magic will yield new spells, too. For instance, starting with a fire spell followed by a wind spell will yield an explosion spell. There are tons of possibilities and using these spells can turn the tides of battle for your team. Besides magic, your team has a wide variety of skills available. Some can be learned from enemies much like they were in Breath of Fire III, others are learned upon a level up, and some of the best skills can be learned from the returning Master System. When you fulfill certain tasks, Masters will teach you new tricks. Again, I was glad to see this was brought back for the fourth installment.

Ryu’s dragon transformations are also back, but the Gene Splicing has been kicked to the curb for a different system. This was quite unfortunate, because nothing was more bad-ass than splicing the perfect dragon with the right combination of genes. So, what must he do? Ryu will find elemental ores that will allow him to transform into various forms. In these forms, MP gets drained every turn. However, he has access to a wide variety of attacks. Usually, these are best saved for boss battles. Ryu will also have the chance to meet with the various dragons of the world. When he does this, he will learn skills from these divine beings. Battles are similar to what they have been in the Breath of Fire saga, but some changes were thrown in for good measure. Some of these changes, like the Combo System and the ability to swap teammates on the fly were great. But, why did they decide to get rid of the Gene Splicing? It will forever be a mystery!

I was able to finish most of what Breath of Fire IV had to offer in about 40 hours. For the perfectionists out there, you can try to gain the best weapons and armor from monster drops and you can try to master all of the mini-games. However, I was ready for the game to end when it did. Breath of Fire IV was a fun experience. Certain things in the game made me go, “Yay!” Others made me go, “Ehh?” Overall, the game made me say, “That was a fun!” For those who have a desire to play an RPG, especially those who have been following the Breath of Fire series since the SNES days, Breath of Fire IV is the game for you. It may lack some of things you would expect in a classic RPG for the PlayStation, but it will still provide you with a fun experience.