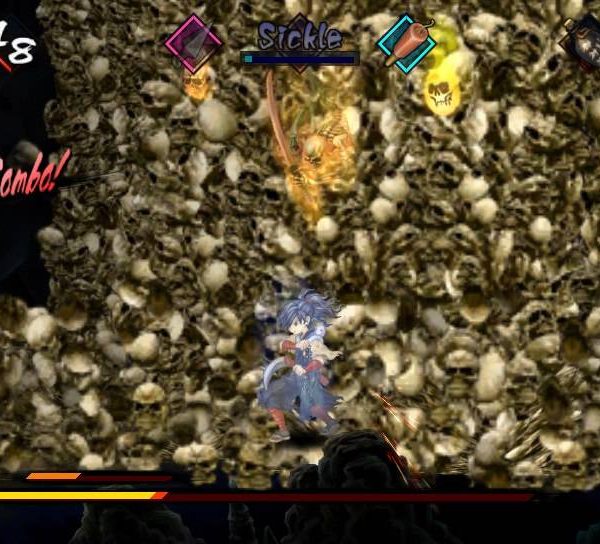 Welcome to the third of four reviews for the DLC installments of Muramasa Rebirth called Genroku Legends. Before we begin, I have to say that I usually frown upon DLC practices and what they entail. However, after earning the platinum trophy in Muramasa Rebirth, I wasn’t ready for the journey to be over. The price was right for Genroku Legends and I’m glad I took the plunge. They often say that the third time’s a charm, and this adage applies to the Genroku Legends collection. A Spirited Seven Nights’ Haunting is a fantastic addition to the Muramasa family. If A Cause to Daikon For left you skeptical about what follows, then you owe it to yourself to check out this chapter.

During a mission, Arashimaru desecrates a shrine built for the water god. A representative of the god named Shirohebi tells him that Arashimaru must pay for his sins: he has been given seven days until his death. Already annoyed with his life, Arashimaru decides to kill all of the people from his past that have wronged him. Slowly but surely, Arashimaru will learn about his past and about the people that used him to do their bidding. As a result, they have been marked for death by Arashimaru. Out of all of the stories in Genroku Legends, this one is my favorite. Arashimaru severs all ties with his past and manages to form an unlikely friendship with the god’s representative all for the sake of revenge. There is no humor or comic relief anywhere in this tale and it helps overshadow the bizarre events from Gonbe’s.

Taking control of Arashimaru is just like taking control of the heroes from the main campaign when there aren’t any enemies on screen. You will explore Feudal Japan as you head from one goal to the next. You can buy goods from the same vendors and eat at the same restaurants. While Ara’s story takes place in the same setting as Momohime’s and Kisuke’s stories, his fighting style is different. Instead of using a variety of Japanese swords, he can alternate between three ninja weapons: the kunai, a sickle, and bombs. Each tool can be upgraded with spirit energy found from the field and defeated enemies. Upgrading your weapons can result in increased attack power, enhanced skills and/or passive effects that can be equipped. Arashimaru can also wear one accessory.

As a ninja, Arashimaru’s weapons are all about agility and mobility. Instead of dealing crushing blows, his weapons require him to zip around the battlefield and pepper the enemies from afar or take a slightly risker approach and confront them head on. Each weapon has a strength and a weakness, as well as its own unique Spirit Attack. The kunai are a button mashers’ dream. The faster you mash the attack button, the more kunai he’ll throw. The damage of one kunai is miniscule, but eventually they’ll add up. You can also perform close range attacks with the kunai, but they are best used as ranged weapons. Unfortunately, using them slowly depletes their spirit. The sickle is my favorite weapon: it can be used to keep enemies at bay, attack 360 degrees around you and has a similar move-set to a sword found from the main campaign. The sickle also has a fantastic special attack. Finally, Arashimaru’s bombs deal heavy damage upon impact, but they drain spirit rapidly. This is another ranged weapon that takes a while to get used to. Playing as this stylish ninja is a huge adjustment. All of his weapons rely on dodging instead of defending because their spirit drains so rapidly. However, once you learn to fully utilize all that he can do, it’ll be hard to go back to playing as Momohime or Kisuke. There is something elegant about Arashimaru’s fighting style and his wide range of abilities.

Major game play changes aside, A Spirited Seven Nights’ Haunting has some new music and new locations to visit. With only three acts, the game is over all too soon. Out of all of the characters in the DLC, I feel that Arashimaru could have benefitted from the most growth and backstory. Finishing the quest the first time lets you access all of the Caves of Evil and all of bosses from the main story. Finishing each boss will grant you an item that will let you receive a different ending. Finally, finishing the final boss on Chaos Mode will unlock Fury Mode. With a variety of challenges and trophies awaiting you, A Spirited Seven Nights’ Haunting can last up to 15 hours. If you were left wanting more action after dealing the final blows to the Momo’s and Kisuke’s final bosses, then I recommend giving the DLC a look. This was my favorite chapter in the Genroku Legends and hopefully you’ll enjoy it as much as I did.

Overall, 8/10: I would have been happy to play this installment for another seven nights.