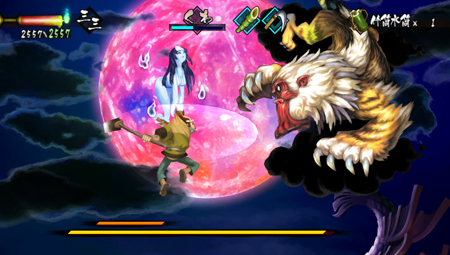 Welcome to the second of four reviews for the DLC installments of Muramasa Rebirth called Genroku Legends. Before we begin, I have to say that I usually frown upon DLC practices and what they entail. However, after earning the platinum trophy in Muramasa Rebirth, I wasn’t ready for the journey to be over. The price was right for Genroku Legends and I’m glad I took the plunge. While the second episode isn’t as impactful as the first, it still offers a unique story that is quite different from the main campaign. A Cause to Daikon For has an interesting premise that could have benefited from having more to it.

The story revolves around a farmer named Gonbe. Unlike the seasoned samurai or expert ninja roaming Japan, Gonbe is a simple farmer that wishes to earn a decent living. After fighting off some crows from further ruining his crops, Gonbe and some of his friends decide to ask for more help and resources from a government that loves exploiting the weak, making taxes as high as possible and ignoring the rules of common courtesy. Will one farmer be able to begin a revolution? That was my question when I first took control of Gonbe. You’ll get your answer as you continue his journey. The unfortunate thing about this is that his journey lacks cohesion. I can’t tell if it’s supposed to be a comedy, a drama or something in-between. It lacks the dark themes found in Ooki’s campaign and doesn’t take the time to fully develop the characters like in the main campaign. Thus, by the time you reach the conclusion, you’ll be left wondering why the developers directed the narrative in such a way.

Taking control of Gonbe is just like taking control of the heroes from the main campaign when there aren’t any enemies on screen. You will explore Feudal Japan as you head from one goal to the next. You can buy goods from the same vendors and eat at the same restaurants. While Gonbe’s story takes place in the same setting as Momohime’s and Kisuke’s stories, his fighting style is different. Instead of using a variety of Japanese swords, he can alternate between three farmer tools: the hoe, the bamboo spear and the sickle. Each tool can be upgraded with spirit energy found from the field and defeated enemies. Upgrading your tools can result in increased attack power, enhanced skills and/or passive effects that can be equipped. Gonbe can also wear one accessory.

Gonbe’s three tools have their own strengths and weaknesses, as well as their own Spirit Gauge. The hoe is a powerful weapon that can be charged for a powerful strike. However, its range isn’t as good as the bamboo spear. In fact, the spear is my favorite of the three weapons. Not only is it capable of stun-locking most enemies with its combination attack, it also has a fantastic special attack. The sickle is a unique ranged weapon. Each use causes its Spirit Gauge to be drained. Until it gets some of its more useful upgrades, the sickle is the least powerful weapon. Gonbe’s most important ability comes with his Quick Draw. Once activated, Gonbe will summon another farmer to help him in battle. The farmer will mimic Gonbe’s moves. Up to two farmers can join Gonbe. While they aren’t as durable as our hero, having the extra help can turn a boss battle in your favor in the blink of an eye. That said, Gonbe and his arsenal of tools aren’t that durable, either. In comparison to not only Momohime and Kitsuke, but also Ooki, players will struggle with Gonbe.

Major game play changes aside, A Cause to Daikon For has some new music and new locations to visit. The bad news is that this quest only last three hours and the ending events come out of leftfield. However, finishing the quest the first time lets you access all of the Caves of Evil and all of bosses from the main story. Finishing each boss will grant you an item that will let you receive a different ending. Finally, finishing the final boss on Chaos Mode will unlock Fury Mode. With a variety of challenges and trophies awaiting you, A Cause to Daikon For can last up to 15 hours. If you were left wanting more action after dealing the final blows to the Momo’s and Kisuke’s final bosses, then I recommend giving the DLC a look. For a small fee, you can gain an additional 15 hours of game time and enjoy a new story as a farmer. If anything, Gonbe’s journey gives me new respect for farmer’s and their daily struggles.

Overall, 5/10: Gonbe’s quest seems like it could be epic, but it has a hard time finding its holding.