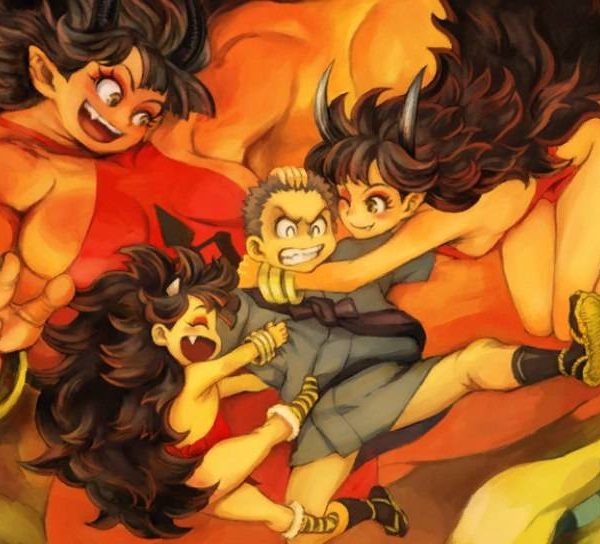 Welcome to the final review for the DLC installments of Muramasa Rebirth called Genroku Legends. Before we begin, I have to say that I usually frown upon DLC practices and what they entail. However, after earning the platinum trophy in Muramasa Rebirth, I wasn’t ready for the journey to be over. The price was right for Genroku Legends and I’m glad I took the plunge. The final chapter in this collection is vastly different from the stories of woe and strife when compared to the previous protagonists. There is no revenge, no possession, no drama, or no bloodshed. Hell’s Where the Heart Is tells a non-traditional love story that is equal parts hilarious and endearing.

The story begins with a womanizing monk named Seikichi striking out over and over with potential love interests. Funnily enough, he sees Momohime enjoying a rice ball and attempts to seduce her. Unfortunately, Seikichi’s romantic advances miss their mark. Momohime is no longer in the picture after Seikichi’s sonnet ends and the youngest daughter of Hell Lord Enma hears everything. The darling demon Rajyaki decides to become Seikichi’s bride and will do everything she can to make sure they live happily ever after together in both the human world and in the fiery underworld. Obviously, this is a story with a lighthearted narrative. It’s humorous, fun and a nice way to take a break from the cruel realities of what happened to Kisuke, Momohime, and the protagonists from the other installments of Genroku Legends.

You take control of Rajyaki in her quest for everlasting love. Taking control of her is just like taking control of the heroes from the main campaign when there aren’t any enemies on screen. You will explore Feudal Japan as you head from one goal to the next. You can buy goods from the same vendors and eat at the same restaurants. While Rajyaki’s story takes place in the same setting as Momohime’s and Kisuke’s stories, her fighting style is different. Instead of using a variety of Japanese swords, she will alternate between three unique forms. Each form can be upgraded with spirit energy found from the field and defeated enemies. Upgrading your forms can result in increased attack power, enhanced skills and/or passive effects that can be equipped. Rajyaki can also wear one accessory.

Rajyaki’s fighting style feels like an upgraded version of Ooki’s. Her first form is child form. This is the most familiar form because she can perform combos similar to the heroes from the main quest. This is also the form she travels in. Her second form is adult form. This unique form has much less maneuverability and much less combo potential, but it has its uses. Adult form causes Rajyaki to swing her club around at blinding speed and finish with a ground slam. Finally, Rajyaki can access her demon form when she has built up enough power. Rajyaki will enjoy insane power and temporary invincibility in this form. Obviously, it doesn’t last for long so it needs to be rationed carefully. All three forms can learn new skills as Rajyaki continues to enhance her skill tree. The fun thing about all of Rajyaki’s forms is that she can become enraged as she lands more hits. Recall, if you will, how most bosses will begin to flash red after enough damage is done to them. This is what happens to Rajyaki and the results are devastating. This not only makes her a force to be reckoned with, it also makes her journey the easiest. Personally, I welcomed the forgiving difficulty. There is something to be said about watching a pint-sized demon girl massacring everything in her path all for the sake of love. While most of the time you’ll be alternating between child and adult form, Rajyaki is a solid character that only grows more deadly over time.

Major game play changes aside, Hell’s Where the Heart Is has some new music and new locations to visit. Of course, the campaign ends too soon. However, finishing the quest the first time lets you access all of the Caves of Evil and all of bosses from the main story. Finishing each boss will grant you an item that will let you receive a different ending. Finally, finishing the final boss on Chaos Mode will unlock Fury Mode. With a variety of challenges and trophies awaiting you, Hell’s Where the Heart Is can last up to 15 hours. If you were left wanting more action after dealing the final blows to the Momo’s and Kisuke’s final bosses, then I recommend giving the DLC a look. For a small fee, you can gain an additional 15 hours of game time and go on the most difficult journey of all: love. Rajyaki’s charming tale is lots of fun and a great way to say farewell to Muramasa Rebirth.

Overall, 7.5/10: Hell’s Where the Heart Is ends this epic collection of stories on a light and enjoyable note.