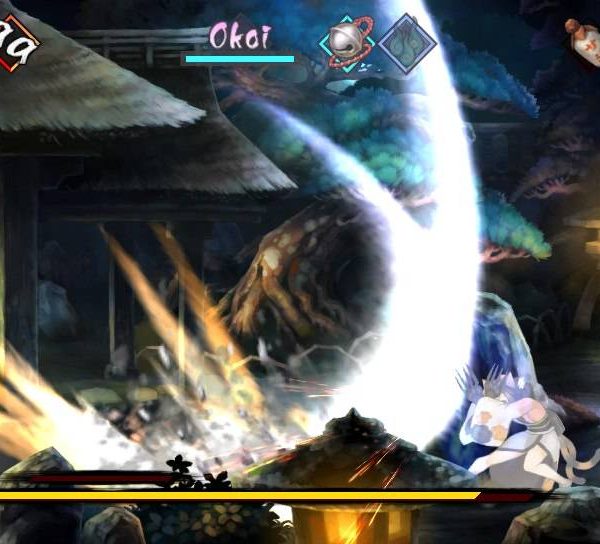 Welcome to the first of four reviews for the DLC installments of Muramasa Rebirth called Genroku Legends. Before we begin, I have to say that I usually frown upon DLC practices and what they entail. However, after earning the platinum trophy in Muramasa Rebirth, I wasn’t ready for the journey to be over. The price was right for Genroku Legends and I’m glad I took the plunge, especially since the first of the four installments starts with a bang. Titled Fishy Tales of the Nekomata, this adventure is one of revenge, betrayal and adorable kitty-cats.

The story is about a young woman named Ooki. Ooki and her brother are on a journey to deliver a prized tea set to a shogun. However, Ooki’s brother is cut down by hired assassins from their family’s chief retainer. Unfortunately, Ooki isn’t too far behind. On the brink of death, Ooki’s cat Miike hears her masters’ cries for help and her desires to enact revenge on the people who betrayed her and her family. Miike ends up possessing Ooki; causing two to become one. Now part feline and part human, Ooki continues her mission. But, she also has her own agenda of sinking her teeth and claws into those that did her wrong. It’s a dark and bloody tale that surprised me from the moment it began. Momohime’s and Kisuke’s stories both had their share of depressing moments, but Ooki’s keeps these themes for nearly all of the campaign. Even after a certain boss fight that can only come from the creative minds of Vanilla Ware, Fishy Tales of the Nekomata has a story in which revenge acts as the central theme.

Taking control of Ooki is just like taking control of the heroes from the main campaign when there aren’t any enemies on screen. You will explore Feudal Japan as you head from one goal to the next. You can buy goods from the same vendors and eat at the same restaurants. While Ooki’s story takes place in the same setting as Momohime’s and Kisuke’s stories, her fighting style is different. Instead of using a variety of Japanese swords, she has the ability to alternate between three forms. Each form has its own Spirit Gauge. The first is human form, which is also the form in which she travels outside of combat. Instead of using a sword, Ooki will fight with claws. By switching to her second form, Ooki becomes the cat, Miike. As Miike, you are much smaller, quicker and nimbler. However, your attacks are far less damaging. Luckily, Miike has the unique ability to charge spirit energy and unleash a variety of magical attacks. Ooki’s final form can only accessed after enough time has passed. Fittingly named Avatar form, Ooki turns into a monstrous cat-demon that takes up a good chunk of the screen. Once you’re in Avatar form, you can perform devastating attacks and enjoy temporary invincibility. Of course, this only lasts a few seconds. Ooki’s unique fighting styles have their perks, but they have their share of challenges. Ooki is not nearly as sturdy as Momohime or Kisuke, and the initial battles will take some adjustment. Since her Avatar form can only be used after enough time passes, most battles will require you to alternate between Ooki and Miike. That said, it’s a fun adjustment and watching Ooki grow with her new powers is rewarding. Ooki’s three forms can be enhanced with the spirit you obtain from enemies and the field. You won’t be forging new blades, but you’ll be increasing her abilities and learning new skills via a skill tree. You can also use the spirit to earn new passive effects. You’ll be able to equip each form with one effect, as well as equip one accessory.

Major game play changes aside, Fishy Tales of the Nekomata has some new music and new locations to visit. The bad news is that this quest only last three hours. While the story is great and taking control of Ooki is a neat change from what you’re used to, the story ends just as things start to get good. However, finishing the quest the first time lets you access all of the Caves of Evil and all of bosses from the main story. Finishing each boss will grant you an item that will let you receive a different ending. Finally, finishing the final boss on Chaos Mode will unlock Fury Mode. With a variety of challenges and trophies awaiting you, Fishy Tales of the Nekomata can last up to 15 hours. If you were left wanting more action after dealing the final blows to the Momo’s and Kisuke’s final bosses, then I recommend giving the DLC a look. For a small fee, you can enjoy a new story as a cat-girl. As a cat owner myself, I’m glad that I went through Fishy Tales of the Nekomata. If my cat is anything like Miike, then I know that I will be well protected.

Overall, 7/10: Fishy Tales of the Nekomata is a great way to kick off the DLC in Muramasa Rebirth. I just wish it lasted longer.