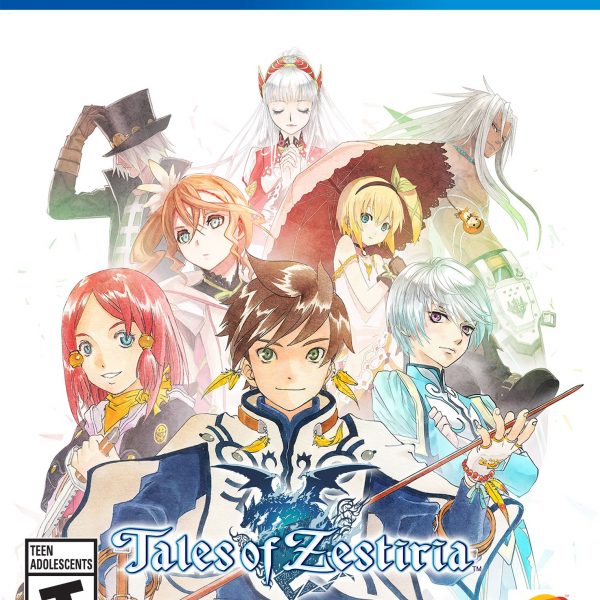 Tales of Zestiria represents the 20th anniversary of Namco’s wonderful Tales of series. Rumors about it not being well regarded, lacking in content for one of the main characters and being an all-around different type of Tales of did not dissuade me from buying it on release day and beaming with excitement. I read through the instruction manual with glee as I learned that the battle system was similar to Tales of Graces’. I downloaded the free DLC and squealed when I saw all of the homage paid to previous Tales of characters. Eventually, I popped the game in and…it turned out to be an above average experience at best. Don’t misunderstand because this is another game in a series that I adore. However, I warn folks to proceed with caution. Tales of Zestiria flips much of what you know about the series around and not all of the risks from Namco played to their advantage.

One thing that makes Tales of Zestiria worth a try is its story. Most games with “Tales” and “of” in the title lack a narrative worth remembering, but Tales of Zestiria’s reminds me of why I enjoy RPGs in a fantasy setting. Set in a world of swords, sorcery, and dragons, Tales of Zestiria takes place on the continent of Glenwood. Despite it sharing the name of every street in suburbia, Glenwood holds more legends and lore than one could imagine. In ancient times, darkness would spread across Glenwood. The only one able to stop this darkness was The Shepherd, a human that had the ability to communicate with Seraphim. Seraphim look like humans, but have the ability to control the elements. Our hero, Sorey, loves reading legends of The Shepherd and exploring ancient ruins. With his best friend Mikleo, Sorey ends up finding a young woman named Alisha during one of his excursions. The meeting with Alisha will lead Sorey on a journey across Glenwood and let him learn the truth of The Shepherd.

The story in Tales of Zestiria is reminiscent of Grandia or Lunar; RPGs with characters that love exploring the wonders of the world. This alone makes the story great, but the characters Sorey meets along the way take things to the top. Sorey and Mikleo are a great duo, and they are joined by other memorable characters that have their quirks that can only be realized by a Tales of. My personal favorite is Lailah. Despite having legs for days and silver hair that would make Cher jealous, Lailah has a knack for making terrible puns and being a guiding light for the rest of the party. Sorey and his companions are a great group.

At a glance, game play both in and out of battle have the look of a standard Tales of. Sorey takes the lead and usually has another party member behind him in the field. Throughout the game’s towns, you will see little speech bubbles appear with rumors of the current situation. Even simple things like sleeping at the inn or buying new equipment took a new approach. Instead of sleeping at an inn for a fixed price, you pick from a selection of meals that provide bonuses in battle. Instead of shops having the same equipment, most of their wares tend to get changed every time you leave town. Instead of a world map, you will have to buy maps from the Turtlez Company.

But we’re just getting started. Opening the menu screen shows more new changes; some good and some not good. First, the good stuff. All party members can learn Support Talents that grant bonuses. Characters have access to a variety of costumes and accessories. Battle Actions give bonuses and special perks during battle. Finally, there is a plethora of information in an in-game library regarding the game’s systems, enemies, records and more. Then, there is the equipment. In most RPGs, your equipment effects your character’s base statistics. In Zestiria, the complexity of equipment reaches an all-time high. All pieces of equipment come attached with passive skills. With the push of a button, you can view each character’s skill grid that has a variety of icons and colors. Basically, all pieces of equipment come with one of these skills. Since leveling up in ToZ is slightly different than most titles, you need to rely on skills to mold your characters properly. The worst part of the equipment system is that when you find a new piece of gear, instead of rushing to equip it you need to take the time to analyze the skills it has. It adds unnecessary complexity to the game. Other features such as Lords of the Land and Normins add further complexity.

Of course, if you take the time to fully utilize the proper skills, it will help you in battle. Battles in Zestiria are a familiar yet foreign mix. The fast and fun combo-building action that Tales of is known for is there, but as you dive deeper into them, you will see that there are good and bad aspects to it. Fans of Tales of Graces will have a huge advantage here. There are three types of Artes that have a rock-paper-scissors relationship: martial, hidden, and seraphic. All characters can use Martial Artes with the use of the O button and a direction on the control stick. They’re just like A-Artes in Graces. Human characters can assign Hidden Artes to the X button. Seraph characters can use Seraphic Artes, which is a fancy way of saying magic. Hidden Artes execute immediately, whereas Seraphic Artes require a casting time. All characters have a Spirit Chain that lets them attack and dodge. Again, if you played Graces, then this will sound just like its CC system.

Tales of Zestiria has new battle features that set it apart from its predecessors that might divide the fans. You are only allowed to have two human characters and two Seraphim in the battle party. Thus, when Sorey is the only human during a story event, your party is limited. Luckily, near the beginning of the game, Tales of Zestiria introduces two great aspects to combat. The first is the Blast Gauge. This lets you use an attack that increases your combo count and allows you to use Mystic Artes. Having at least one Blast Gauge lets a human and a Seraphim form one being through the power of Armatization. By combining the stats of two characters, not only do you gain a huge boost in power, but you have access to a whole new set of Artes. Armatization is awesome because it demolishes most enemies. However, the real key to victory in Zestiria is exposing enemy weaknesses. Elemental weaknesses are a start, but it’s more important to find Artes that target a specific type of enemy. It can seem overwhelming, especially on higher difficulties when your attacks don’t cause an enemy to flinch. If you don’t take the time learn what each of your characters can do and properly tweak the AI, then chances are you will be dealing minor damage to the enemies.

You might be thinking, “I can just build some levels and make up for not taking the time to learn enemy weaknesses.” Gaining levels does very little to your characters. In order to increase their stats, you have to use herbs found throughout the world. The only thing gained upon a level up is an Action Point for Battle Actions. Furthermore, the only way to increase HP (aside from using herbs) is to defeat bosses. Sometimes, it feels like you’re not playing a Tales of.

With all of the features in and out of combat, I find Tales of Zestiria to be a case of extremes: either I am having a fantastic time or I am having a miserable one. However, one thing that does not disappoint is the presentation. I’ll cut to the chase: Tales of Zestiria looks and sounds amazing. Great graphics, great character models, great anime scenes, and great variety. The music is catchy and most of the voice acting is top-notch in either English or Japanese. I have no complaints in either department.

Tales of Zestiria features plenty of side-quests and optional content. While running through the game on the standard difficulty level takes 40 hours, all of the optional content will nearly double that time. Trophy hunters will have lots of grinding in their future if they wish to get another coveted platinum. For the most part, I have had a good time with Tales of Zestiria. Unfortunately, it wasn’t consistent. It’s a shame because this is my favorite series and I want everything to be as close to perfect as possible. As a result of all of the changes and alterations, I only recommend Tales of Zestiria to fans of the series.