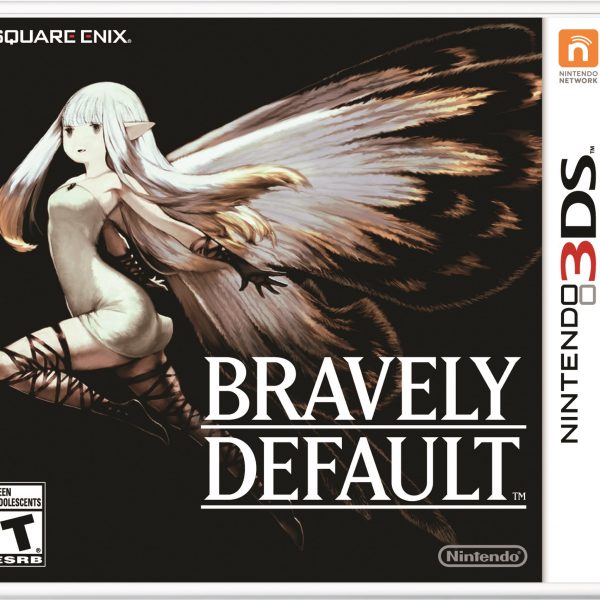 A depressed farm boy, a shrieking hyena of a woman, a sleaze ball with a terrible pompadour, and a naive swordswoman walk into a bar. They are asked to perform a quest that could spell the difference between life or death. They argue among themselves slinging one-dimensional dialogue and, eventually, decide to perform said quest. Oddly enough, however, this quest has been done time and time again by these same half-wits. This is how it goes for 90% of Square’s RPG, Bravely Default. For a game that comes from the folks responsible of Final Fantasy, I didn’t have high expectations for a good narrative. But this. -THIS- is just unforgivable. If the story is going to be terrible, then make sure that the characters are memorable and unique. If the characters are going to be terrible, make the story one that can be told for years to come. Thank goodness that Bravely Default has a fantastic battle system and a variety of options available to the player that make actually playing the game worthwhile.

As mentioned, the narrative is about four idiots who are trying to save the world. In order to do this, they need to restore the crystals of wind, water, fire and earth. Darkness will consume the world and blah-blah-blah. Tidal wave. Disaster is imminent. Honestly, the story has more to it than this, but this is how it starts and remains for the first couple of chapters. A four elemental crystal story is classic and right up the alley for anyone who grew up with RPGs. At one point in the game, there is a “twist” that anyone with two eyes and a functioning brain can see coming. Anyone, that is, except the heroes who get warned endlessly nearly everyone. Let’s look at the Heroes of Light. Tiz is an emotional train wreck of a do-gooder who will sob at the drop of a hat. Agnes is a [this word has been deleted by the reviewer because he is a feminist and doesn’t want to offend the female populace] and needs to be smacked upside the head. Ringabell is a one-trick pony who says nothing substantial. Instead, he just spouts nonsense about girls and getting into their pants. He has amnesia, so that’s something. I guess. Finally, we have Edea. In my opinion, she’s the only redeemable character. While she’s a bit of a babe in the woods, she isn’t as moronic as the other three. The villains aren’t better, either. A friend mine said this about them: “The villains might as well have been given Snidely Whiplash mustaches to twirl.” The bottom line is that you should not play Bravely Default for the story or characters. In fact, you can skip all of the story sequences with the push of a button and still know what to do.

The story skip option is just one of many excellent features that make up for Bravely Default’s awful narrative. Players navigate through a world map that’s not too big but not too small and enter dungeons and towns. Like a good RPG, both locations have plenty of secrets to find. Towns have shops where you can buy items, equipment, and spells. Dungeons have treasures, simple puzzles and some tough enemies. If you are ever unsure of your next objective, a yellow “!” will show up on your bottom screen. One of my favorite things about the game is that there is a glossary of terms and information that describe all of the weapons, items, armor, terms, characters, etc. that you uncover. While the story may not be anything special, its obvious care was given to the translation.

But, the real fun of the game comes with the fantastic battle system that uses the even more fantastic (fantastic-er? fantastic-al?) job system. If you played Final Fantasy V, think of Bravely Default as FFV on illegal steroids. Battles themselves are rather basic. Sure, you can attack, use magic, use items, and other things but one thing that makes BD stand out is the Brave and Default System. All actions require Brave Points. You can store Brave Points by using the Default option, which doubles as a defend option. By using Brave, you can take more than one turn. Of course, using it too much means your character will be unable to do anything. There’s definitely a balancing act that you have to take into account when it comes to using either Brave or Default. At first, you have to carefully use these options because you won’t have many others available to you. The basic jobs in Bravely Default consist of things like a monk, a white mage, and other familiar faces that don’t leave much room for customization. Eventually…

…you will have a wide variety of over 20 jobs that have more options than you can shake a stick at. Characters can become magic swordsman that move like ninjas or time mages that use deadly attacks that sacrifice HP. With a variety of attack and support abilities acquired as you earn Job Points that level up your jobs, players can make a party that suits their play style. Unfortunately, even with the right jobs at your disposal, you might find yourself getting whacked by normal and boss enemies. One of the problems with BD is that there never seems to be enough money for buying new gear and spells. Specific strategies need to be used for certain bosses, too. This takes away some of the flexibility. There are even more options that make playing Bravely Default a pleasure. You can adjust the difficulty, the encounter rate, and the auto-save options at any time you please. Using Street Pass, you can rebuild a village that will provide you with items, shops, and bonuses for special attacks. But wait! There’s more! You can send and receive attacks from your friends on the 3DS network which can often times help you out against the grueling boss battles.

As you can see, there is plenty to do in the game. There is also plenty to look at. Despite the ridiculous looking character models (blow-up doll realness!), Bravely Default is a solid looking game. Either on 2D or 3D display, prettiness overflows. This also applies to the music. If you feel the need to splurge, try to find the game new so you can listen to the music when you’re not playing the game. Despite the solid score, the voice acting could have been a bit better. Luckily, you can swap the voices to Japanese if you desire.

I’d like to conclude this review with a shout out to the awesome GameFAQs.com user and friend of mine, Horith. He has helped me with a ton of questions and provided me with excellent tips and tricks in dealing with the game’s nearly 70 hour journey. While the story and characters in Bravely Default are some of the worst written in RPG history, the other features boost the score to above average. If you want an RPG that will last you a long time and that has some meaty content, Bravely Default is your pick. Don’t expect to be sucked in by the story, though. Instead, get ready to be sucked in by the vast amount of options available that take a cue from the classic, Final Fantasy job system.