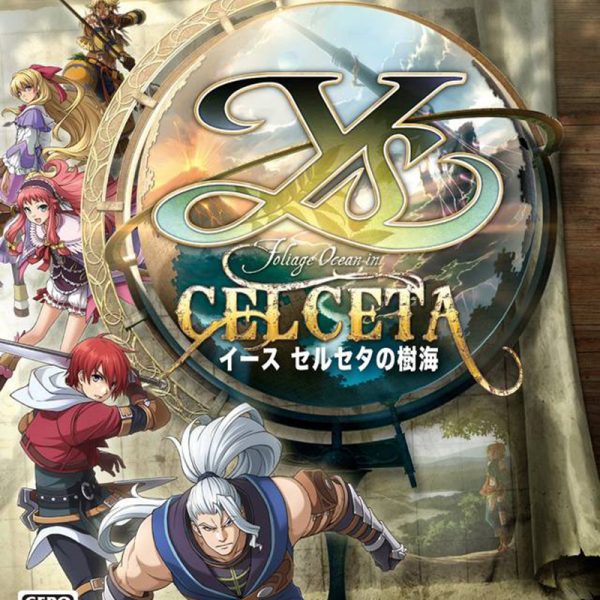 Hello, hello, hello! I’m so glad you decided to take time out of your day to check out what is likely to be my final review for the year 2013. It has been a great year for RPGs, my dear readers. The best thing about 2013 coming to a close is that 2014 promises to be even better for the genre. So, what did y’all play during the year? Did you fight for the spirits in Tales of Xillia? Did you look for a missing sister in Atelier Ayesha? Did you make your eyes bleed due to all of the flashing and slashing in Project X Zone? Or, did you do all of the above? Well, whatever you did I doubt it was as fun as searching for Adol Christin’s memories in Ys: Memories of Celceta for the Playstation Vita. Originally Ys IV, the Vita version completely surpassed my expectations and made me proud to be a Vita owner. Indeed, Ys IV has become my game of the year. XSeed deserves a plate full of fresh Christmas cookies for doing such an excellent job in the localizing, and Falcom deserves a punch bowl of eggnog martini for developing such a solid title.

Let’s get into it! Ys: Memories of Celceta takes place after the events of Ys II. Adol once again answers the call of adventure and heads to the world of Celceta. However, there is a myth about this mysterious world surrounded by trees. They say that if you go too far, then you will lose your memories. Adol finds his way through the forest and into the town of Casnan, but he ends up becoming an amnesiac. Luckily, he hasn’t forgotten his sense of adventure and with his friend Duren, he decides to figure out what exactly happened to him during his first voyage through the sea of trees. Adol and Duren end up getting the aid of four other characters. There’s the lovely Karna, an glamazon type of warrior who lives among the trees with her clan of hunters. There is also my favorite character, Calilica, who is a magic apostle from the town of Highland. She fights with a mace that probably weighs twice as much as her and can summon it at will in a similar fashion to a magical girl from anime. The story already has plenty of intrigue because you’ll be behind Adol the entire time, hoping he remembers what went on. However, there is a lot more to Ys IV because it sets the stage for the Romun Empire, the lore of Eldeen and the enigmatic Clan of Darkness seen in other games in the series. Thanks to XSeed doing some of their best work yet, the script in Ys IV is fantastic and will keep you coming back for more as Adol makes his way through this vast world.

Celceta isn’t the most hospitable place, so Adol and his comrades will have to do plenty of stuff to prepare for their travels. Towns allow you to buy items, weapons and armor. There is also an exchange option, which lets you exchange useless materials from monsters and plants for more useful materials. These materials can be sold for money, refined or used in upgrading your weapons an armor. Each town also has its own specialty shop. For instance, in Highland you can upgrade your key items if you have the right raw materials. In the village of Selray, you can upgrade your weapons and armor. With enough tweaking, your equipment will be able to inflict serious hurt upon your foes. Entering new towns never has a dull moment, and with a variety of chatty NPCs, you will spend more time in them than you’d think.

Once you have had enough of the sightseeing, it’s time to exit the safety of the walls and get ready for battle. Ys IV’s combat is fast, exhilarating, and full of variety. If you played Ys VII, you will feel right at home. Each character’s weapon has a property: slash, strike or pierce. Certain enemies are weak to these properties. By exploiting their weakness, you will usually earn better rewards from their defeat. Monsters are always ready for action, so it’s a good thing each character can execute a powerful combo and has access to a ton of skills. The more a skill gets used, the more powerful it gets. Best of all, by using skills, you can fill up a gauge that lets you unleash a devastating ultimate attack. Adol and his crew have got things under control offensively, but what about defensively? Sure, you can dodge and guard, but, the fun happens when you time these maneuvers right to perform a Flash Move or a Flash Guard, respectively. With a supply of vicious monsters and imposing bosses, the combat in Ys IV is easily the best feature. Dungeons also have puzzles, treasures, and farming points, but the combat against the beasts is what make them exciting.

The monsters, both generic and boss, come in a huge variety of shapes, sizes and colors. Palette swapping was used for certain models, but the different colored versions of certain foes still have their own unique attacks. This, the character models, and the environments come together to make a stunning presentation. Now, I will say that the graphics lack the quality of something expected on Vita. I like to think of them as PSP-Plus level graphics. They are better than the PSP, but not where they could be with the Vita. In fact, the first scene of the game shows a cat walking through the city of Casnan. The poor kitty ends up sinking into the concrete due to the textures. However, when you are watching impressive skills clobbering the gigantic bosses, the graphical quality will be the last thing you complain about. Besides, the tunes that get played during boss battles (and in dungeons, in towns, on the world map, during events, in the entire game, etc.) will distract you further from any issues you might have with the graphics. In case you missed my point, the music is excellent. As always. As expected.

Similarly, it is expected that Ys IV would have extras to keep you coming back for more after the credits finish rolling. The New Game Plus lets you carry over everything you earned. There are various modes of difficulty and the epic boss rush mode is back. Throw in a bevy of side-quests and secrets and you can expect to spend 60 hours of game time if you wish to do it all. Without a doubt, fans of Ys should check out this game. However, this game is also recommended to fans of fast-paced action-RPGs that do everything right. A great story with a wonderful cast? Check. A beautiful level of graphic quality and a killer sound track? Check, again. Plenty to do when you’re not saving the world? Check-er-roo! When you are saving the world, is the combat always intense? Checkity-check! Pardon my Ys-gasm, but I think you get the drift: this is an excellent title. Completely surpassing my expectations, Ys: The Memories of Celceta has become my game of the year for 2013. Hopefully, it will do the same for you, too!