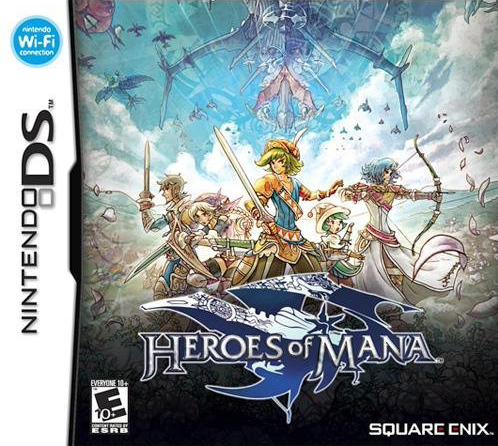 Who’s leg do I need to hump for a new, traditional and enjoyable Mana title? Is it so much to ask for a game to be developed that has the elements of a Mana title that made the first game from the SNES so memorable? Look, I knew what I was getting into when I decided to try Heroes of Mana for the Nintendo DS. Unlike the rest of the series, Heroes of Mana takes a different approach in terms of combat and design by having real-time strategy battles and a story divided into chapters. Thus, I knew that I would have to adjust my outlook on certain things if I were to make the most of another Mana adventure. All I can say is that I tried, but it wasn’t enough from making this one of the most upsetting entries in this dying franchise.

The game (allegedly) takes place prior to the events of Secret of Mana 2. Aboard the airship, Nightswan, five warriors are on their way to the realm of beastmen to confirm rumors of an attack. There is Roget, a swordsman with a lonely heart yet a strong sense of righteousness. The leader of the group is Yurcheal, an archer with quick-thinking perfect for the head of a group. Qucas is a mercenary who is along for the ride due to the promise of a paycheck. I can’t say I blame him; these are tough times. Next, there is Gemiere. I’m unable to form accent marks on this website, but note that her name has a grave accent over the second “e.” Anyways, she’s a tough-chick who gives Hawkeye -REALNESS- by fighting with twin-daggers. Finally, there is young D’Kelli. She’s able to summon creatures to do her bidding. Their ship gets blown out of the sky and they land in a forest full of enemies. Now, they have to deal with the beastly folks of the forest as well as their dubious kingdom of Peddan before the entire world of Fa’Diel is taken over by a dark force. In terms of a Mana title, the story is fair. The five crewmen interact well with each other during the course of the adventure, despite them all coming from different walks of life. It was neat seeing them stay true to their character throughout the adventure. Also, the eight elemental spirits were back and it was a pleasure seeing them. The story and characters weren’t anything special, but I expected that based off of my experience with the franchise.

Before I start ripping into this title, I will mention two things that deserve a hint of recognition. The first is the music. Yoko Shimumura returns to make a good sound track. I still prefer Legend of Mana’s OST in comparison, but you can tell that this is her handy work. The other thing I want to point out is that the game is pretty. If you played Children of Mana, you’ll see that the same style was used. The fairytale setting has always done well with Mana games, and Heroes of Mana is no exception. Oh, hello Rabites! You are looking as adorable as ever. The colors will explode out of your DS and into your eyes. It’s just a shame that the character art is so ugly. Ryoma Ito is the bloke behind the design, and it’s hard to take the game seriously at all when you look at such ridiculous looking characters.

Blah, alright. Let’s get into it. Heroes of Mana is an RTS game. This genre of game is one that I never cared for. Before you lash out with the, “You’re a total Growlanser fan” retort, let me inform you that the Growlanser series has a very different approach to the RTS genre. Heroes of Mana is much more traditional, which in turn, makes it much more frustrating. At the start of a battle, you are given winning and losing conditions. These can change at the drop of a hat. Fair enough considering the genre, but usually inconvenient. The majority of the battles consist of you deploying your human troops on an dark map, uncovering Gaias and Treants for resources, creating structures to make units and battling enemies. You need build structures that provide you with familiar monster units. One of the more important monster units is the Rabite, because they will be the ones gathering the resources you need to keep building structures and sending out monsters. Once the conditions are fulfilled, the battle is won and you move onto the next chapter and story event. Between these, you can equip your team with weapons and armor. If you’re a fan of these types of games, then you might find something enjoyable with Heroes of Mana. However, I’m not a fan. I never liked the RTS genre, and to add insult to injury, Heroes of Mana has some problems with the mechanics. First, since the game is entirely touch screen based, you would think it would be smoother in moving around the maps and ordering units. The touch screen is responsive, but not as responsive as needed. Furthermore, the player AI is not trustworthy. If you want to send someone down a certain path, chances are they won’t be taking that path. Instead, they’ll take some bizarre route to get to their target.

However, the biggest problem is that this is supposed to be a Mana game. Back in the day when the entire Mana world was created, the masterminds behind it wanted to make it so it was different from the Final Fantasy series. Thus, they made an action/RPG. Heroes of Mana has no action, and instead tries to be like Starcraft or Command and Conquer. It might be set in the same world as other Mana titles, and there is no doubt that there is a certain aesthetic that is pleasing to both the eyes and ears. But, this game has strayed far off of the path of a Mana game and, once again, fails to recapture the enjoyment found from Secret of Mana. Even if you disregard my bias towards the RTS genre, this is a game not worth playing and a game that is not worthy of being involved in the Mana world.