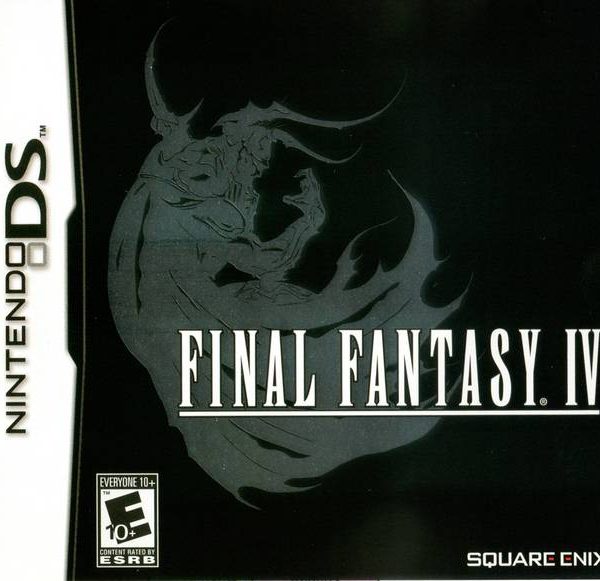 Author’s Note: This review was originally published on September 25th, 2008. Like other reviews at the time, I used “witty” taglines to separate sections. Looking back, this is probably the worst version of Final Fantasy IV available due to its difficulty spikes and bizarre presentation.

The last time I played a game in the top-selling RPG series was back in 2003 with Final Fantasy X-2. Since then, none of the Final Fantasy games have appealed to me. Luckily, Square decided to give Final Fantasy IV, my favorite entry in the series, a remake for the Nintendo DS. While the remake has a few issues, FFIV allowed me to relive old memories and create new ones with the enjoyable gaming experience it provided. Indeed, Final Fantasy IV is and will always be my favorite in the series, no matter which version gets played.

Cecil’s Crystal Quest.
Final Fantasy IV begins with your hero Cecil, the commander of Baron’s Red Wings and a mighty Dark Knight, contemplating his majesty’s abrupt change. Recently, Cecil and his team were forced to steal the Water Crystal from the wizard village, Mysidia. However, no one from the mystic village fought against Cecil’s squad. While Cecil was successful in his raid, there is no denying that he felt extreme guilt. The once just kingdom of Baron seems to be up to no good. When Cecil questions his king, he is stripped of his position in the Red Wings and is forced to go on a new mission with his best-friend, Kain the Dragoon. Together, they will get wrapped up in a chain of events that puts the fate of the entire world at stake.

For those who have played FFIV before, you will not be in for anything new because the likes of darling Rydia, beautiful Rosa, mysterious FuSoYa, and other characters are familiar. However, the DS version gives each character more depth and individuality that was not seen in previous versions. Now, if you are not familiar with these faces then you are in for a surprising treat. Like the characters, the story is still the same, but again, there is more to it in the DS version. Again, those new to the Final Fantasy IV universe are in for some fun times. Sure, finding the elemental crystals has been a common theme in the FF series, but when you see the intentions of both the heroes and the villains, you will find an endearing and classic story.

The Semi-Pretty Paladin.
When you load Final Fantasy IV, you are treated to a breathtaking FMV introduction. If only the rest of the game had such flair. The DS version has been upgraded to show 3D environments and characters. The environments look nice, but the characters look silly. Gravity clearly has no effect on Rydia’s hair, and each character’s big heads look awkward on their little frames. By no means are the character graphics bad, but they do look goofy. However, the monsters and spells look awesome. Unlike the previous versions where their blinking would indicate their attack, you actually see them moving and attacking. Summon spells look as slick as always, and you can skip their animations if you grow tired of watching them. Had the characters themselves looked a bit better, the graphics would have been nearly perfect.

Uematsu Has Upped The Anti.
The music from Final Fantasy IV is the exact same as it was in previous versions. However, the songs have been edited to fit the DS speakers. Most of the time, portable systems are unable to deliver quality music. However, FFIV for the DS is the best sounding yet. For the first time, the game features voice acted cut scenes. These voice overs help move the story along and give each character that extra spark of life. As expected, the music department was done well.

Flying High in the Sky!
At the start of the game, exploration is limited to walking. The more terrain you explore, the more the top screen map gets drawn out. In dungeons, completing maps nets you items. As you progress in the game, you will acquire a variety of devices that allow you to fly. These range from a hovercraft to a technologically impressive space ship. When you enter a town, there are more things to explore. Besides people to talk to, exploring nearly every object will prove worth your while because chances are you will find an item or two. Finally, the mascot of FFIV, Namingway, has been given an all new quest of his own. Find him in the towns and dungeons, and eventually you will treated to a fabulous prize. Another new quest for you involves Rydia’s personal summon, Whyt. By playing mini-games, you can increase this Eidolon’s abilities. FFIV is full of things to do.

One Hit KO.
One thing is for sure; the challenge of FFIV has remained the same. FFIV has the ATB battle system where you have to let a bar fill before you can have your character make a move. In a battle, all of your characters have the option to attack, defend, and use items. Each character also sports their own special abilities. For instance, Rosa can use White Magic, can use Pray to restore a bit of the team’s HP and MP, and use Aim to ensure 100% accuracy with her bow and arrow. Despite everyone’s unique abilities, those familiar with this game know that this is one of the harder games out there. When you enter a new dungeon unprepared, you might as well start over. Random encounters are frequent, which can get annoying if you are looking for a spot to save. While there is a quick save feature, it does not allow you to permanently save your data and use a tent or cottage for recovery. Boss battles are even more of a challenge. Very rarely will you encounter a foe that goes down without some sort of strategy. Button mashing the attack option will get you nowhere. While certain characters like Kain and Yang are better off sticking to attacks, the rest of your team should be doing something that involves the boss’s weakness or helping your party. Those looking for an easier RPG should look elsewhere. And for those who are wondering, yes, the final boss is still very difficult.

Additional Augmentation.
The standout feature offered in Final Fantasy IV for the DS is the Augment system. When certain characters leave, they leave behind their essence in the form of Augments. Using Augments on characters grants abilities of the old characters. For instance, when Edward leaves, you will get an Augment that allows someone to cast Song Magic. With Tellah, you will get an Augment that allows someone to use the Recall ability. The list goes on and on, and there are many Augments to discover. The downside of the Augments comes with the fact that once they are used, they are gone forever. Those who know who stays and who goes should be advised to use Augments on everyone in order to get the best Augments later in the game.

Four is Forever.
The game took me about 40 hours to finish. Much of that time was due to level building in order to overcome any foe, boss or otherwise, in the final areas. When the credits finish rolling, you are given a New Game Plus option which holds extra secrets for you. Do not let the challenge dissuade you from purchasing this game because simple level building is all that will make or break your characters. Yes, grinding is not fun, but in this game it is kind of a necessary evil. Furthermore, battles are quick, rarely lasting longer than a few seconds. The sometimes hideous challenge, and the silly looking graphics aside, Final Fantasy IV for the DS is an excellent remake that I recommend to Square fans, FF fans, and those who enjoy good RPGs.