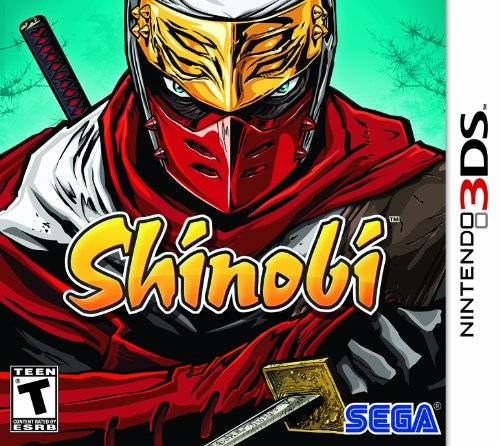 Fans of action games typically shudder when they think of the challenges given to you in a Shinobi title. From Joe Musashi’s early days of pit-fall peril to Hotsuma’s quest to kill a sorcerer with attacks crazier than his hair, Shinobi games offer a challenge that will make any gamer question whether or not he/she is worthy of calling himself/herself just that. The latest installment in this long-running franchise, simply called Shinboi, has made its way to the Nintendo 3DS. Now that Mario 3D Land is out, chances are you’re looking for something to play alongside your favorite plumber. If you’re a fan of the Shinobi series or a fan of action games in general, then chances are you’ll be happy with Shinobi for the 3DS. Just remember that you’re playing a very, very difficult game that needs some work.

Before talking about Jiro and his quest, let’s take a look at this game from a visual stand point. This is the 3DS, after all. The 2D playing field is back, full of perilous traps and enemies who show no mercy. Unfortunately, they’re ugly. As are the environments. Heck, the entire game is pretty dang ugly to look at. Most stages lack color, and the legendary red scarf is nowhere near as fun as it was in the PS2 Shinobi. With the 3D turned on, it doesn’t add much effect. It just makes it in 3D!!! Yeah, nothing to get excited about. The graphics are easily Shinobi’s worst feature. The 3DS is capable of so much and the creators made some ugly looking visuals that hardly scratched the surface. That said, the animated videos that play between stages are awesome. The music is a bit better. Most stages will have you listening to songs that combine oriental flavor with some upbeat, techno inspired, rock and roll vibes. It’s a combination that works well for Shinobi, as it has done in the past games.

Now then, onto Jiro and his mission. Jiro is the father of the legendary Joe Musashi. When his village gets attacked, Jiro gets tossed into the future to fight the forces of evil that put him there, namely the organization known as Zeed. Or something like that. I think there’s a chick with guns involved, too. Oh, and robots, enemy ninja and monsters that are created in labs for the purpose of world domination. Also, brain monsters! In all honesty, Shinobi’s story is nothing to get invested in. Not like it was in the original games, though. That said, the animated cut scenes that play during intermissions do a good job of moving things along. You won’t get to learn anything about the foes you face, but that rarely mattered in past Shinobi games. All you need to know is that you are in control of Jiro and he has a variety of moves ready to kick enemy butt.

Unfortunately, you’re going to be getting your butt kicked more often than the enemies. From the start of the first level, enemies just love to kick the living tar out of poor Jiro. You know that urge you get to throw something across the room when things don’t go your way? Like when you were promised some Girl Scout Cookies and it turns out you won’t be getting any this year due to the economy? You don’t know that feeling? Why are you looking at me like that? Oh, Shinobi. Right. My point is that you’ll want to chuck your 3DS over and over and over becaus Jiro will die and die and die.

Jiro comes equipped with a sword, a grappling hook, unlimited throwing kunai, and ninja magic. He can perform a variety of sword maneuvers, a drop kick, a double-jump, and a spinning slash. Some new tricks in the Shinobi franchise are available, such as using your grappling hook to pull yourself up to an enemy and sending it flying down to the floor. The grappling hook also lets you go up and down from certain platforms. If you press the kunai button during a double jump, he’ll toss out five kunai in a fan-like pattern. Jiro is a capable warrior, but his magic is also useful. Fire magic allows him to enhance his knives as well as create a huge explosion. Water magic lets him jump higher and it increases the rate at which his kunai regenerate. Earth magic makes him crazy strong, but will reduce his health when it wears off. Finally, lightning magic grants temporary invincibility. Using magic requires scrolls, which are scattered among the stage along with extra lives, medals that increase your points, kunai power ups and chicken that restores health. You can also attempt to find hidden Oboro coins and secret mission coins if you’re daring enough.

Despite the fact that slashing an enemy to bits with a combo or juggling him in the air with kunai never grows old, Shionbi’s unforgiving difficulty makes the game not fun to play at times. Frustrating doesn’t even begin to describe the later levels of this game. Not to mention, for a portable game, the levels are too long. Getting a game over means you have to start at the very beginning of the stage on the normal difficulty level. So, what is it that makes the game so hard? Well, first is the fact that Jiro seems to be made of paper. A few hits from some enemy shurikens followed by a kick to the face and Jiro will be desperate for some chicken. Also, watch out for spikes. Lots and lots of spikes. You’ll have to get your timing down exactly right with wall jumps, double jumps and the like or Jiro will have more holes in him than Swiss cheese. Now I’m hungry, dang it. But the thing that will rattle your proverbial chain the most is the parry. Jiro can parry attacks with the touch of a button. In many action games, parrying attacks allows you to avoid damage and follow with a powerful counterattack. Shinobi is no different, but for some reason, a vast amount of emphasis has been placed on the parry. Nothing is more frustrating than missing your timing just-so with the parry and getting hit. I much prefer the shadow-dash to the parry, despite the fact that parrying a barrage of attacks feels satisfying. It takes practice to master the parry, and it becomes a necessary evil later in the game.

And I wouldn’t be so annoyed by all of it if the controls felt more responsive. There is no denying that Shinobi is a difficult game. I get that. I’ve been around the block and know what’s what. Stop judging. My point is, Shinobi will always be a difficult franchise but the crisp, sharp controls never fail you. Truly, you are the one who feels like an epic failure when you miss a jump or can’t read an enemy pattern. Yet in the 3DS Shinobi, it was a combination of both my lack of skill and a lack of solid controls. It goes beyond that annoying Rick Perry–er, Parry. Gah, politics. The grappling, the wall jumping, the fact that you have to ride on a horse and on a makeshift surfboard all add up to an unpleasant experience that requires too many trials to be considered fun.

When the stage ends, you will be given a score. Using magic and getting hit drops your score. If you continue to kill enemies, you build up a score multiplier that increases your score. Finding all of the secret coins lets you take part in a bonus game where you throw kunai at enemy ninja. It was a nice throwback to the olden Shinobi arcade days. And really, Shinobi 3DS is not a bad game. It has plenty of extras and secrets. When things are actually going your way, it can be loads of fun. The problems arise when things aren’t going your way. Nothing in Shinobi is worse than the ugly visuals, but this game would have been rated higher if the control scheme had felt more precise. While I do consider myself more of a fare weather fan of Shinobi, I do know that my experience with the ones I touched all had something in common: difficulty. This version is no different. However, along with the previous entries’ difficulty came incentive to try and try again, and maybe go for broke and beat the game on a harder difficulty. This isn’t the case for Shinobi 3D. I still recommend it to long time fans, but remember that the times have changed and no amount of 3D will make up for that.