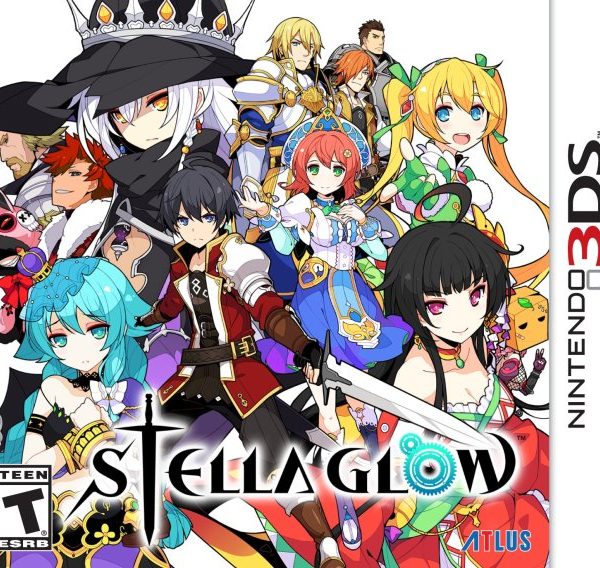 I’m a huge fan of Luminous Arc and Luminous Arc 2. You can imagine my sadness when I learned that Luminous Arc 3: Eyes wouldn’t be heading to our shores. Image Epoch, the company behind this great series, made a final strategy game before closing their doors permanently: Stella Glow. This is a fantastic title. How fantastic, you may be wondering? Well, I purchased a 3DS during around the time of their Ambassador Program. This means that I have had one of these little darlings since they first launched. For the longest time, Tales of the Abyss was my favorite game on it. After playing Stella Glow, that has changed. Seriously, if you have any interest in a new strategy game with fantastic characters, graphics, music and writing, then this is the game for you.

Stella Glow starts with the introduction of our hero: Alto. Living in the village of Mithra, semi-amnesiac Alto is an average guy with above average sword skills. One night, he hears a strange sound and follows it into a deep section of the woods. The sound was actually a song. Not many people are able to sing, so when Alto learns that the source of the song is a woman named Hilda, his life changes forever. Hilda, the Witch of Destruction, sings a song that turns nearly all of the residents and structures of Mithra to crystal. Now, Alto and his best friend Lisette need to put a stop to Hilda’s ambition and restore Mithra to its normal form. Stella Glow’s story is paced perfectly with exceptional dialogue. After the first hour, you’ll be thrown into the kingdom of Regnant and learn what you must do to stop Hilda and her Song of Destruction. Just when you think you’ve seen everything, new information continues to trickle into the heroes’ lives and come together for a story that has drama, humor and intrigue. However, it’s the characters that really make this game shine. Similar to the Luminous Arcs, Alto will meet unique characters that include knights, witches and mercenaries that have their own personality. I have a hard time picking a favorite character because I enjoy all of them so much.

Playing Stella Glow will feel familiar to anyone that has played a strategy game. After the prologue, you will get a general idea of the game’s flow. Alto’s quest is divided into Free Time and Mission Time. During Free Time, you can chat with your characters to raise their affinity with Alto, help shops with odd-jobs for a monetary reward, or you can explore to find hidden treasures. Free Time is limited, so you have to use it wisely. It’s highly recommend that you use it to build relationships with your characters because it will let them learn new abilities. This is especially true for the party members that are witches. At one point in the game, you will be able to use your Free Time to “tune” the witches in order to let them learn a new song. If you played Ar tonelico and remember diving into the Reyvateils, then the idea of tuning should sound familiar. Building affinity with the characters also has an impact on the game’s epilogue. Once your Free Time ends, it’s Mission Time. Upon entering the world map, you can participate in a free battle to gain extra experience and money, or you can proceed with a story event which usually ends with a battle. This formula works well for Stella Glow. During either Mission or Free Time, you can shop for new weapons, items and armor. You can also purchase and create orbs which can be added to your weapon for beneficial boosts. Proper use of orbs can turn a character from ineffective to irreplaceable in battle.

Battles in Stella Glow are a fantastic mix of contemporary and classic features. In free battles, you can select up to six characters to deploy and are required to clear the battlefield of all enemies. In a story battle, you are usually required to have Alto and some other character related to the event. The victory conditions of these battles range from survival, to the protection of an NPC, to making sure an enemy unit doesn’t reach a certain part on the isometric, grid-based map. Instead of a player turn/enemy turn system, a unit on the map will take their turn depending on their speed. All characters can move, attack, use a skill or use a pre-equipped item. By performing an action while near allies, a character’s stats will increase. Two characters have the ability to unlock treasure chests and doors. Alto and the witches have the ability to utilize song magic. As damage is given and received, the Song Stone located on the top of the screen will increase. At the cost of one to two points, a witch can sing a song that can either damage enemies or give allies in the area useful boosts. At the cost of four to five points, Alto can use his ability of conducting to make a witch perform a hymn. Hymns can easily turn the tide of battle because they have continuous effects on either all of the enemies or all of the allies on the battlefield. However, this means that the witch can’t act until it finishes.

During the game’s tougher boss battles, the ability to conduct witches is more useful than any other ability. While Stella Glow is fairly challenging, all of the abilities at your disposal make the game fair. Like any good strategy RPG, there is always more than one way to reach your objective. Thanks to a generous save system and the ability to restart battles, as well the opportunity to grind as you see fit, Stella Glow’s challenge will appeal to everyone. There may be times that the challenge may seem a bit overwhelming. Certain bosses have attacks that cover nearly half of the battlefield. Others have attacks that can easily OHKO one of your members. One notorious problem occurs during a mission in which you’re supposed to protect an NPC that does absolutely nothing to protect herself. For me, the biggest problem with the battles was trying to decide which of the cast members to select for my preferred party. Similar to Luminous Arc, when a character earns enough experience for a level up they will recover all of their HP and SP. Completing a mission will yield rewards that can be sold for profit, as well as new items. If you fulfill certain conditions that usually make the battle more challenging, you will earn even more rewards such as new weapons or orbs.

With a name like Stella Glow, you can bet that the game has a lovely presentation. This is a great looking strategy RPG that combines the best of 2D and 3D. During the vast amounts of dialogue, life-sized character portraits appear in 2D. During battle, the game shifts to 3D. Performing most actions results in a flashy animation that can be skipped or turned off if you don’t wish to view them. A few animated scenes and a few stills were thrown in for good measure. Most of the game is entirely voiced in English by a seasoned cast. The music is truly spectacular with compositions by Yasunori Mitsuda. However, when Alto conducts a witch, a vocal track plays in Japanese. It may sound odd, but it works remarkably well for the game. I could sing praises about the composition all day; Stella Glow looks and sounds amazing.

By the time I finished Stella Glow, my total play time was 45 hours. Despite the brutal final boss, I wasn’t ready for the game to end. Luckily, the New Game Plus gives me some reason to play again: remaining money carries over, enemies offer more experience upon their defeat and there is much more Free Time available. Do I plan on starting a new game? Absolutely. Stella Glow has surpassed my expectations. At a glance, it’s a strategy RPG that feels like another entry the underrated Luminous Arc series. The further you get into it, the more you learn about the options available in battle as well as the fantastic story. This is a game I recommend to everyone that has the slightest interest in strategy RPGs.

Overall, 10/10: A perfect score for the perfect way to say farewell to Image Epoch.