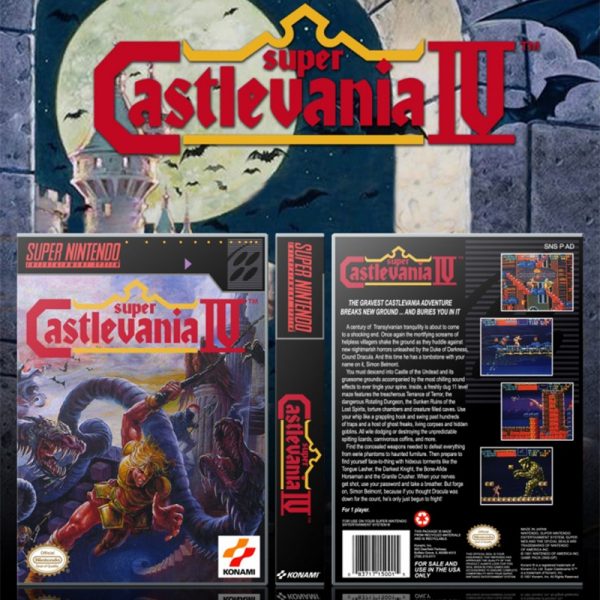 I think everyone knows at least one person that can’t tell a funny story worth a damn. They try to take the listeners back to an incident where someone did something amusing or something amusing happened. They get to the end and realize that they’re the only one laughing. To save face, they usually finish with the following quip: “You just had to be there.” This is how I view Super Casltevania IV for the Super Nintendo. As a huge fan of the series, I feel like I owe it to myself to check out entries that predated Symphony of the Night. Fans, friends, and everyone betwixt recommended Super Castlevania IV before any other. It’s unfortunate that I can’t share their enthusiasm. After a certain point, I stopped counting the amount of times I caused Simon Belmont to meet another demise and threw my hands up in frustration. If we somehow were able to go back to its 1991 release date, then I’m confident my view would be different. But, we can’t. “You just had to be there” couldn’t be more appropriate for Konami’s vampire slaying franchise’s Super Nintendo debut.

Super Castlevania IV is a remake of the original Castlevania from the Nintendo. Thus, the story remains unchanged. Taking place in Transylvania, it has been 100 years since the Prince of Darkness was resurrected and vanquished by a clan of vampire hunters. On a (naturally) dark and stormy night, a massive castle inhabited by an army of monsters appears. The head of this household is Dracula, the manifestation of all things evil. Simon Belmont, a member from a proud clan of vampire hunters, arms himself with his powerful whip and heads towards the castle to fulfill his duty. It’s basic stuff. The setting is atmospheric and has a haunting ambiance, but the story can be easily ignored.

Players control Simon through eleven stages that are filled with supernatural enemies, traps, hazards and other dangers. At the top of the screen is the player’s score, the amount of time remaining on a stage, and the stage number. You’ll also find Simon’s remaining health, remaining lives, and remaining hearts. Hearts are consumed when Simon uses one of the possible secondary weapons. These include a throwing ax, a knife, or a boomerang. Simon’s primary weapon is a whip that can be swung in eight directions. By finding certain items, the length and power of his weapon will increase. If you hold the attack button after swinging the whip, then the whip will become limp and allow you to brandish it in multiple directions. The whip isn’t just used for combat, either. The whip can be used as a grapple to latch onto objects so Simon can swing over hazards. A few other nice touches include Simon’s ability to move while in a crouched position, hidden items in torches, and the ability to see the remaining health of the game’s terrorizing bosses. All of this sounds nice on paper, doesn’t it?

The issue with all of this is that Super Castlevania IV is stiff. Simon doesn’t move fast. Simon can’t jump far. Simon gets knocked back when the tiniest of enemies touches him. Simon doesn’t do well on stairs. Going from something modern to Super Castlevania IV is a struggle. People like me that hopped on the Castlevania bandwagon after Symphony of the Night started to get spoiled. We were spoiled by the lengthier campaigns. We were spoiled by the controls having slightly more responsiveness to them. Most importantly, were spoiled by options. Now, the problems with Super Castlevania IV won’t show up at first. The first couple of levels are enjoyable. They have a slight challenge to them; a challenge that the series was known for back during its beginnings. Afterwards, the challenge gets cranked up to eleven. Simon lacks the options to keep up with the challenges. Clearly, there are gamers that relish this since it turns Super Castlevania IV into a challenging platformer. I am not one of those gamers. I think it was after I got knocked into another pit or mistimed another jump that I realized this wasn’t the Casltevania that I was hoping for.

Despite its problems, Super Castlevania IV is still worth a look. One reason is due to its presentation. Dracula’s castle is a highly detailed, highly unpleasant place for a lone adventurer to traverse. Enemy designs look great, and the bosses range from the cool to the bizarre to the grotesque. It’s a great looking game that takes advantage of the Super Nintendo hardware. Even the game’s title screen is visually impressive. Stop and stare for a moment and you’ll notice creepy critters and eerie shadows make their way across the screen. My favorite aspect of Super Castlevania IV is the soundtrack. If you’re like me and realize that the game isn’t for you, then you should at least check out the music. While the sound effects are great, it’s the music that really shines.

Super Castlevania IV can take as little as an hour to finish. Those that struggle with the controls will be playing the game for much longer than that. A password system lets you save your progress and pick up your progress for another session. Super Castlevania IV is like a funny story that is shared and enjoyed by a group of people. They have fond memories of this story and continue to reminisce about it. When a new person enters this group and gets told the same story, it doesn’t have the same impact. Indeed, this new person “just had to be there.” Super Castlevania IV, understandably, has its share of fans. Since I wasn’t there at the time of its release, I don’t align myself with those fans.

Overall, 6/10: Super Castlevania IV is known for being one of the best in the series. Unfortunately, the rough game play makes it hard to recommend.