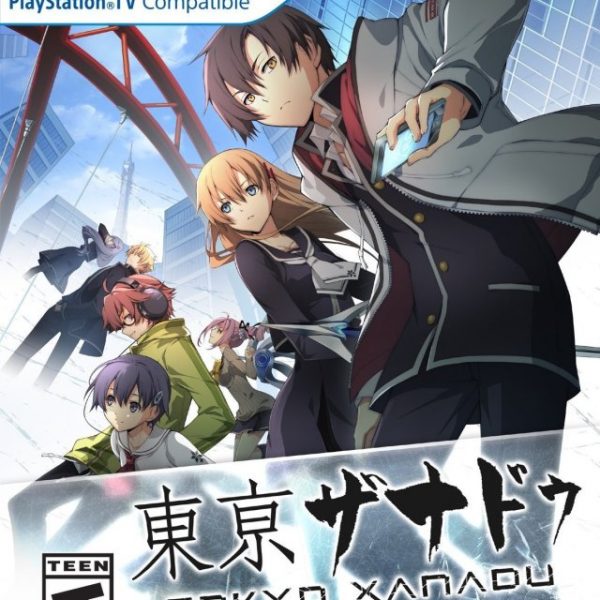 In February of 2017, it was announced the Ys VIII: The Lacrimosa of Dana would be getting a state-side release. I was over the moon and immediately pre-ordered a copy. But, it would be months before its release. I needed something to satiate that action-RPG itch. Tokyo Xanadu, released in June of 2017, seemed like it would be the perfect appetizer to the main course that would be Ys VIII. Tokyo Xanadu isn’t a bad game. My problem with it is that nothing about the game got me excited enough to keep going. This, plus an awkward control scheme make it difficult to recommend to fans of action-RPGs.

Tokyo Xanadu takes place in the fictitious city of Morimiya in the year 2015. The star of the game is Kou Tokisaka, a hardworking high school student that has been living on his own for a few months. After leaving one his part-time jobs, he sees his classmate Asuka Hiiragi getting harassed by some hoodlums. However, the hoodlums disappear into a gate that materializes out of thin air. Asuka enters the gate, with Kou close behind. These gates are called Eclipses. They are created due to the negative emotions of people. Within the Eclipses are monsters called Greed. Kou watches Asuka dispose of the Greed. Now, Kou, Asuka and other chosen classmates need to demolish the Eclipses before Morimiya City is overrun by them.

Tokyo Xanadu’s story feels like one I’ve seen multiple times before. I like that Falcom diverted from the fantasy setting to one that’s more contemporary. However, it feels all too familiar the further you get into it. The characters move in an opposite direction. At first, they’ll appear to be a one-note type. As you progress in the story and get to know them more, you’ll have a bevy of well scripted characters that make Morimiya feel fully realized. Shop keeps, receptionists, even the school nurse all have plenty to say and their own personal history. Of course, getting to know all of them will mean a fair amount of reading. There are times when things can get too wordy and you’ll be ready for the cast to get the point.

After the first chapter, you’ll have a general idea of Tokyo Xanadu’s flow. As a high school student, Kou has to attend class. During some classes, he’ll be asked a question. Answering correctly raises one his of stats. After school, he’ll have free time. This allows you to chat with your classmates and the people in the city. Some characters require you to spend special fragments in order to spend extra time with them. This causes their bond to grow with Kou, which ultimately provides bonuses. However, these fragments are very limited so you need to pick and choose carefully. It can get a bit overwhelming, and that’s just the start of it.

Aside from buying armor and items, Kou can read books, cook recipes, partake in side quests, and more. It’s a lot to keep track of. While the in-game menus help, it can still feel like too much, too fast when the game starts throwing you all of the “stuff” you can do. If you want Kou to be more effective in battle, as well as achieve the true ending, you need to make sure you do everything you can. One of the more important features is weapon upgrading. Kou and his crew can upgrade their weapons with materials gathered from Eclipses and shops. Upgrading weapons allows you to add parts to empty slots which provide bonus effects. There is room for plenty of customization. However, once again, it will feel very confusing at first. The messiness of the menus makes isn’t user-friendly and will take extra adjustment. Overall, there are some interesting ideas here. Their execution feels unpolished.

When it’s time to advance the plot, chances are you’ll head into an Eclipse. Before beginning Tokyo Xanadu, I was looking forward to exploring these dungeons, fighting the monsters within, and discovering the treasures within. After the third chapter, I started to get more and more disappointed by them. Most dungeons are linear corridors filled with only a few diverging paths that have a few extra treasures. Kou and two friends that you select will traverse these in order to reach a boss at the end which will cause the Eclipse to stop causing harm upon its defeat.

For the most part, combat feels stiff. You have an attack button, a dodge button, a jump button, a lock on button, and a projectile button. I tried multiple times to find the right button set up, but I was never able to find something that fit. The Vita doesn’t feel like a good choice for the game’s multiple commands. Sometimes, combat can be rewarding. Each character has an innate element that will deal extra damage to foes of the opposing element. Some enemies sustain more damage from projectiles as opposed to physical attacks. Watching them explode and leave some rewards is satisfying. As you continue to fight, you can build up some meters that allow you to unleash projectiles infinitely and/or execute a deadly attack called an X-Strike. But, these features get piled on before you know it. Furthermore, you can only control one character at a time. The characters that aren’t fighting can recover their energy, but personally, I would have liked to have seen the party fighting together. Once you reach the end of the Eclipse, you’ll find yourself in a room with a save point and a boss. You’ll also receive a grade depending on how much damage you took, how many enemies you killed, and how many items you discovered. The boss fights are a disappointment. Unlike the Ys games, bosses in Tokyo Xanadu are sponges for damage. They aren’t difficult, per se, but they do outstay their welcome.

With a robust cast, customization options, and some flashy effects, you would think that the combat in Tokyo Xanadu would be its best feature. Don’t get me wrong; it has its moments. But, most of the time it feels too rigid even with all of the options at your disposal. Throw in a jumbled camera and a few areas that require precise platforming, and the Eclipses end up becoming chores instead of a joy.

Graphically, Tokyo Xanadu doesn’t look as good as other RPGs on the Vita. The character models move stiffly, even when they’re executing their most powerful attacks. The animate cut scenes are stunning, but as usual, there aren’t enough of these. Luckily, Morimiya city is a gorgeous place to explore. It really makes you feel like you’re part of the city as you move Kou through its various locations. Another disappointment with the game is its musical score. Most fans of Falcom know that they’re behind some amazing compositions, namely with their Ys series. That same level of musical mastery wasn’t found in Tokyo Xanadu. The soundtrack isn’t bad, but it was very underwhelming knowing that it came from Falcom. Most of the game is voiced. Since the game takes place in Japan, I’m happy that the voiced text is entirely subbed. It just feels right.

Those that wish to do it all in Tokyo Xanadu will be looking have at least two play-throughs to deal with. This is mainly because you have to fill in as much information about Kou’s friends as possible. There is a fair amount of permanently missable content, too. Earning the platinum trophy can take a good 80 hours. If the game was more fun, then I’d be anxious to work towards the platinum. Again, Tokyo Xanadu has its fun moments. However, those moments feel too ephemeral and you’re left with a surprising disappointment of a game that usually delivers a solid product. And, yes, a severe lack of Oliva Newton-John was an upset.

Overall, 6/10: Fans of action-RPGs need to proceed with caution. Tokyo Xanadu has the content, but most of it is unpolished and inconsistent.